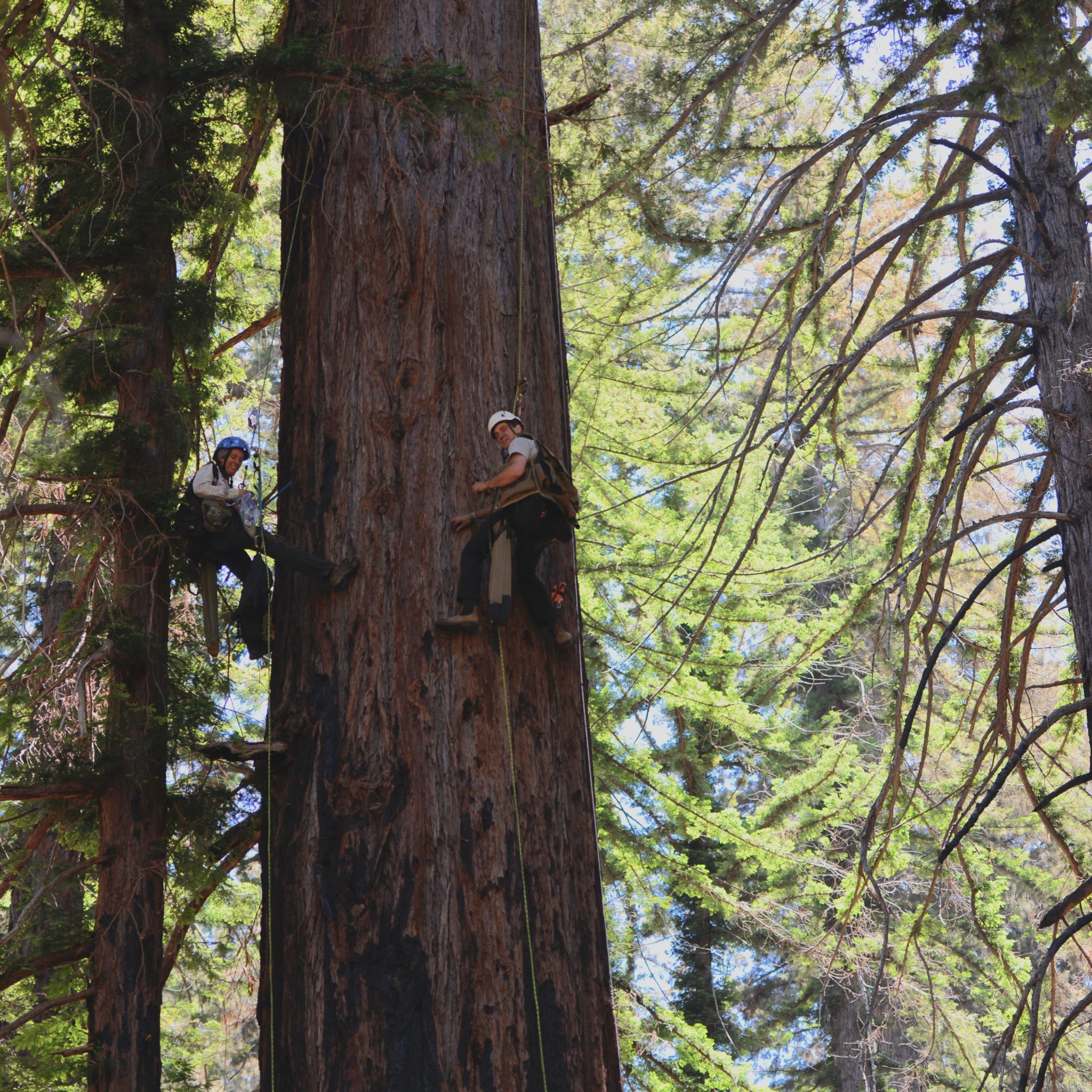 Last year one of the world’s most prestigious redwood researchers visited The Preserve to measure redwoods (Sequoia sempervirens) in Trappers Loop, as part of a redwoods and climate change study spanning over a decade. Humboldt State University Professor Steve Sillett’s work has been featured in National Geographic, the BBC and NPR, to name a few. In 2018, Steve and his team of arborists measured five trees within Trappers and were surprised to discover two of the world’s tallest redwoods ever measured so far south in the range. Below is Steve’s scientific report of their findings in 2018 along with illustrations and graphs. 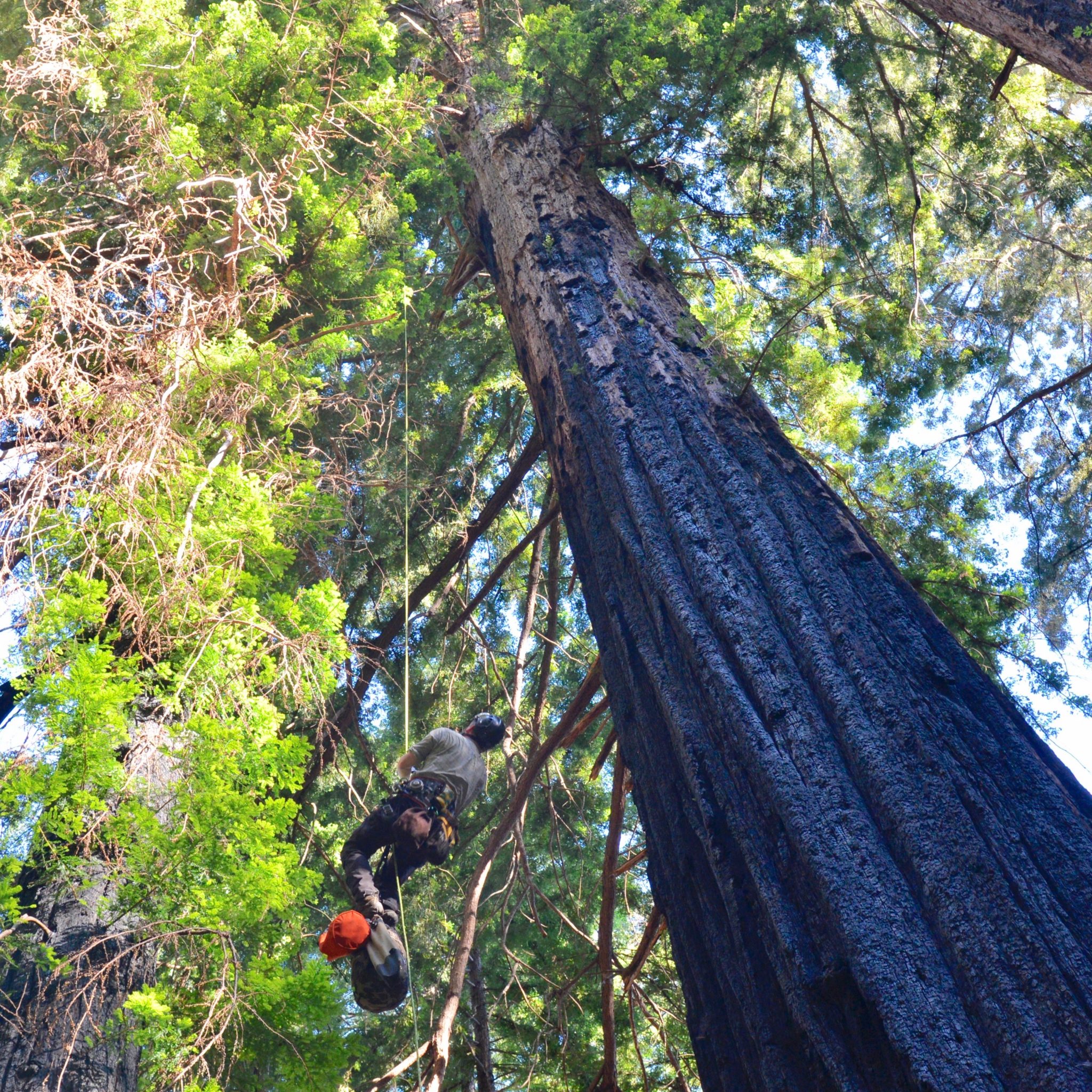 Sequoia sempervirens at the Santa Lucia Preserve—stature, age, and response to fire

In June 2018, three members of my team—Marie Antoine, Jim Campbell-Spickler, myself—had the privilege to spend a week studying redwoods in the Santa Lucia Preserve (SLP) as guests of Tom and Alayna Gray. A fourth team member, Allyson Carroll, processed tree-ring samples obtained during fieldwork and completed the crossdating—assignment of the correct calendar year to each ring—necessary to determine tree ages and growth rates. After a brief description of our long-term project, my purpose here is to share results from the five trees selected for detailed study at SLP.

The Save the Redwoods League has funded our research as part of the Redwoods and Climate Change Initiative since 2009. The third phase of this work, which continues through 2020, investigates forests dominated by Sequoia sempervirens across its native range from the southern Oregon Coast Range to the southern Santa Lucia Mountains. We aim to guarantee tree-ring crossdating success for this notoriously difficult species (Carroll et al. 2014); examine growth trends as functions of latitude, elevation, landscape position, and climate; determine the degree to which drought-sensitivity is driven by climatic gradients versus landscape position; and improve allometric equations for redwoods in second-growth and old-growth forests. Building on previous work, we are measuring 150 trees in 30 locations. The five individuals climbed per location are canopy dominants (i.e., not overtopped by taller neighbors) with healthy crowns so that results can be used to establish the upper limits of tree performance. Using rope access and modern arborist-style techniques—no spikes—we climb each tree to measure trunk diameters at 5-meter height intervals (or less) from ground level to the top. Special care is taken to quantify non-round lower trunks and account for buttressing, fire caves, and other irregularities. Crown size is quantified by combining measurements of the radial extent of live branches and crown depth (i.e., vertical distance from treetop to lowest living branches). At 10-meter height intervals (or less), we collect core samples (5-mm-diameter wood cylinders up to 75 cm long) from the trunk, which are then mounted, polished, and digitally scanned for crossdating and measurement of ring widths to the nearest micron. Combining measured crown sizes, trunk diameters, heights, and ring widths allows centuries-long reconstruction of tree growth in annual increments as well as accurate estimation of tree ages and aboveground attributes (Sillett et al. 2015).

The five redwoods we climbed at SLP include two individuals over 300 feet tall—rare in the Santa Lucia Mountains—as well as shorter and older trees (Table 1). The oldest tree stands at slightly higher elevation than the tallest trees and has a distinctive growth history, requiring several centuries longer to reach the same size as the tallest trees, which stand side by side and grew at similar rates (Fig. 1). In recent decades, however, the oldest tree’s height increased rapidly (Fig. 1a), and its trunk produced much more wood than expected (Fig. 2). The youngest and smallest tree stands in a previously logged portion of the forest below the tallest trees in the same canyon. It is gaining height and biomass much faster than the other trees when they were the same age, presumably because it is close to a creek and has ample growing space. The tallest trees, which have the most leaves (Table 1), consistently produce more annual biomass than the other trees (Fig. 2), but there is considerable interannual growth variation driven by both climate (Carroll et al. 2014) and fire (Carroll et al. 2018ab). During unusually wet years (e.g., 1983), these trees produce over 400 kilograms (882 pounds) of aboveground biomass, whereas during unusually dry years (e.g., 1924), they produce less than 200 kilograms. In 2017, despite the forest receiving 41 % more than the long-term average annual rainfall (33 inches per year, 1900 – 2017, PRISM 2018), the five trees produced virtually no aboveground biomass, a phenomenon replicated only one other time over the past 268 years—in 1830 (Fig. 2). By our visit in June, virtually none of the 2018 ring had been produced in any of the trunks.

Burned in the July 2016 Soberanes Fire, redwoods at SLP invested resources to produce roots and leaves rather than wood in 2017. Most trees whose crowns were fire-damaged had recovered via epicormic sprouting from trunks and branches, appearing green and fuzzy with new leaves less than two years later (Fig. 3a). Trunks of trees whose crowns escaped damage were nevertheless scorched with fire enlarging caves at the bases of several individuals (Fig. 3b). Basal sprouting—also known as trunk reiteration—is prevalent across the forest with many new trunks arising from the majority of redwoods, including smaller trees entirely killed aboveground (Fig. 3c). Sensing an opportunity, many of the redwoods also invested heavily in cone production during 2017. These treetops were laden with brown, ovulate cones (Fig. 4a), whose seeds were shed and covered the ground in 2018 (Fig. 4b), giving rise to carpets of seedlings (Fig. 4c). Such heavy investment in both vegetative (sprouting) and sexual (seeds) reproduction after fire is a remarkable phenomenon that helps the species maintain long-term dominance of the forest. Redwood’s extreme fire and decay resistance are the other major contributors to its dominance, allowing these trees to grow larger than in nearly any forest at lower latitude in North America. Only groves of Sequoiadendron giganteum in the Sierra Nevada are further south with taller trees than the forest at SLP.

Ongoing research will clarify how climate, fire, and human activities affect redwood performance across its native range. Ultimately, we hope to define realistic targets for restoration management of redwood forests in terms of tree height, biomass, wood production, carbon sequestration, and habitat provisioning for old-growth associated species. Our experience at SLP enriched both our appreciation of redwoods and scientific understanding of the forests they create. We are grateful to the Save the Redwoods League and Kenneth L. Fisher for their continued support and to Tom and Alayna Gray for making our first visit to SLP so rewarding. 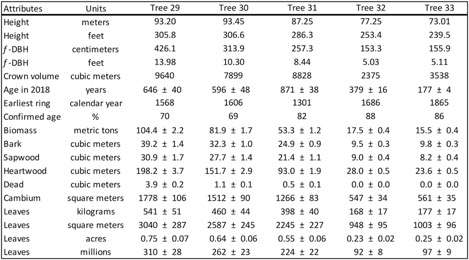 Figure 1. Size versus age relationships for five Sequoia sempervirens trees measured at the Santa Lucia Preserve. Increment core sampling at 10-m height intervals along the trunk, combined with diameter measurements from ground level to treetop, permitted accurate reconstruction of (a) tree height and (b) aboveground biomass at annual increments. Note that growth histories span centuries, revealing that trees reached 200 feet (61 meters) tall in 126 – 617 years, the oldest tree (31) was less than 250 feet (76 meters) tall for more than 800 years before gaining height and biomass rapidly in recent decades, and the oldest tree required 468 more years to reach 50 US tons (45 metric tons) than the largest tree (29). 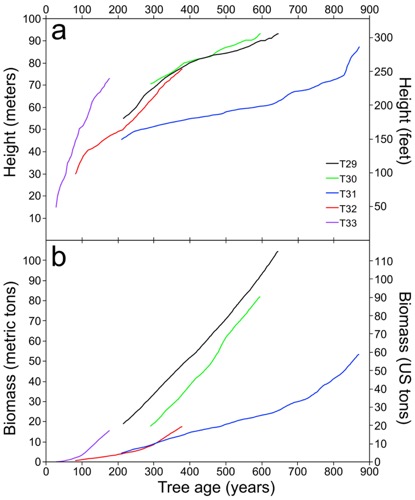 Figure 2. Annual growth increments over 268 years (1750 – 2017 inclusive) for five Sequoia sempervirens trees measured at the Santa Lucia Preserve. Aboveground biomass was predicted from measured trunk wood volume using an equation based on 61 intensively measured trees that explains 99.2 % of the variation. Upper panel charts biomass increment (i.e., aboveground dry mass produced annually), and lower panel charts a size-detrended metric of tree performance—residual wood volume increment, RWVI—expressed as the percentage of trunk wood produced relative to the amount expected under uniform growing conditions (0), where cambium expands at the mean annual rate and wood production is directly proportional to size. Note that very little biomass was produced by any tree in 2017, which occurred during only one other year (1830), and the oldest tree (31) grew much more than expected in recent decades until 2017. 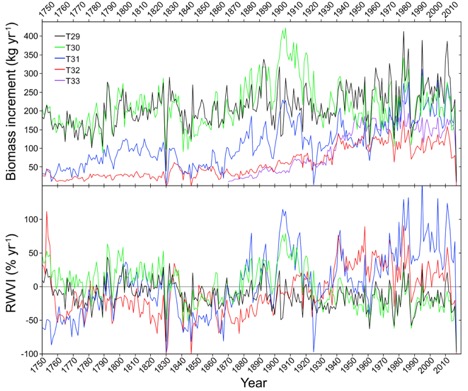 Figure 3. The July 2016 fire caused (a) epicormic sprouting from branches and trunks, (b) scorched bark and enlarged fire caves, and (c) prolific basal sprouting in most trees. 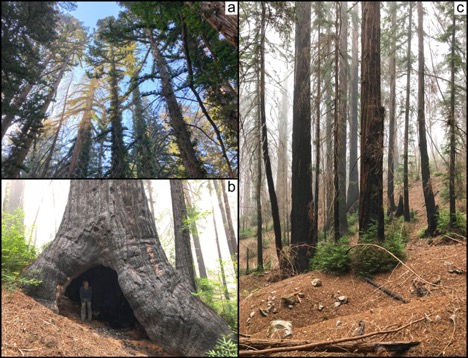 Figure 4. In response to the 2016 fire, many redwoods produced massive crops of seed cones the following year (a). During our visit in 2018, the ground was covered with seeds shed from these cones (b), many of which had germinated to form a carpet of seedlings (c). 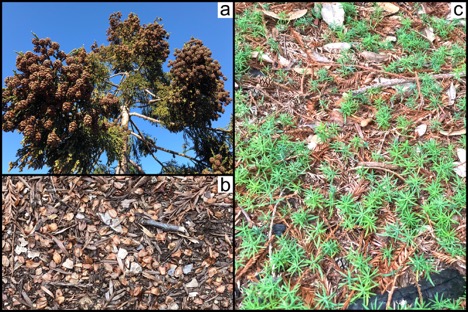