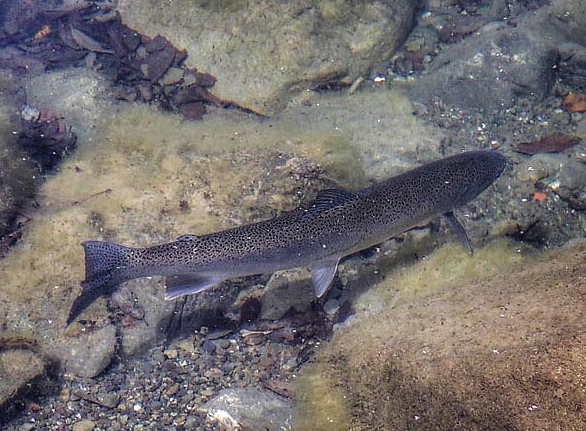 Oh-my-kiss, that is how the fisheries biologists refer to them. No, it isn’t an affectionate term for a loved one, but short hand for Oncorhynchus mykiss, also known as the steelhead trout. The silvery steelhead is one of the most remarkable animals on the planet.

They are a unique form of rainbow trout that are anadromous. Like their pink fleshed cousin, the salmon, this species spawn and live in freshwater streams as rainbow trout but a portion of the population gets a wild hair and heads out to sea once mature, only to return to their natal freshwater stream to breed. During the transition from fresh water to salt water and vice versa, these species undergo incredible physiological changes including bulking up and shifting colors. Unlike salmon, who swim upstream once in their lives to lay eggs before dying, steelhead repeat this 50-mile roundtrip swim to The Preserve year after year. This strategy is not that of a rebellious teenager, instead it is a survival strategy for the species. Having a flexible lifestyle has allowed steelhead to adapt to changing conditions along the coast including droughts and shifts in food supply. 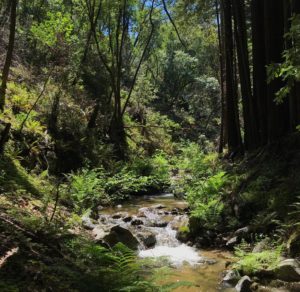 Despite a millennia of adapting to the world around them, Central California Coast steelhead populations are in decline and were listed as threatened in 1997. What they need to survive is healthy streams with reliable perennial water.

On The Preserve we have no fewer than six vibrant streams, each wending its way across 20,000 acres: San Jose Creek, Garzas Creek, Potrero Creek, San Clemente Creek, Robinson Canyon Creek and the upper reaches of Hitchcock Creek. Each of these streams are considered “steelhead bearing” which means when the streams are flowing at high levels steelhead come in from the ocean to breed each winter, contributing to the genetic diversity and overall abundance of the local population.

Having six healthy streams in our community is no accident. In the early planning phase of The Preserve, streams and surrounding riparian plant communities were identified as priorities to protect. Detailed biological surveys were conducted, wells, roads and Homelands were placed in locations that safeguarded the streams. The annual erosion of bare dirt from historic ranch roads was even ceased by allowing grass to seed the trail beds and portions of the old roads to retire and recede back into nature.

Each of these decisions, and the thoughtful and ongoing land management practices employed by the Conservancy, Ranch Club and Community Services District, help keep our streams running clear and full. These decisions also, literally, flow downstream. Our actions at the top of the watershed wind their way all the way down the creeks until they meet the Carmel River and eventually, flow into the Pacific Ocean. 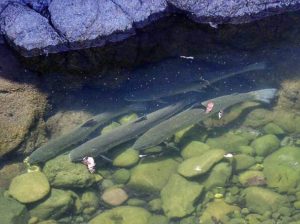 Preventing erosion on The Preserve keeps silt out of the Carmel River. Supporting healthy forests on The Preserve helps clean the water as it flows downhill. Managing invasive weeds at the top of the watershed reduces their spread downstream. Preparing for wildfire on the slopes above the creeks protects the plants and soils that slowly release the winter rains and feed the creeks all spring long. Each protection and each management decision we make plays out along the reaches of our six creeks.

As with so many of our special species on the property, the mighty steelhead vote with their presence, indicating that they approve of our choices and want to come back year after year to breed in our permanently protected creeks. So, next time you are along one of our creeks and lucky enough to catch a sliver flash of a steelhead or rainbow trout, go ahead and blow a kiss to the little O. mykiss! 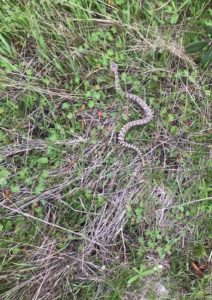 RATTLESNAKE
Signs of summer arrive in various shapes and sizes, and sometimes early. The first Pacific rattlesnake of the year was spotted on Peñon Peak in April. In one study, rattlesnakes were found to be responsible for removing up to 4,500 ticks every year. 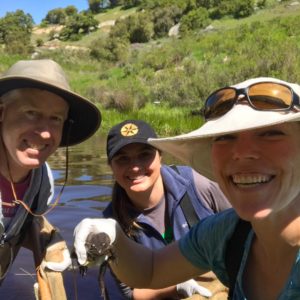 REDLEGGED FROG
We were thrilled to encounter one of The Preserve’s endangered species, a California red legged frog during pond surveys with our friends Ventana Wildlife Society during Earth Week. 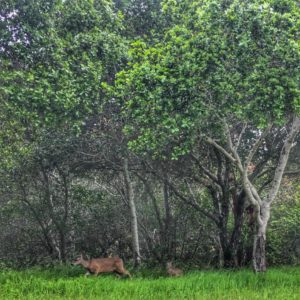 FIRST FAWN
Leapt into May with our first fawn sighting of the year on The Preserve. Fawns stay motionless and hidden in the grass for the first several days of their lives. The newborns scare easily so it’s important to take care when hiking. 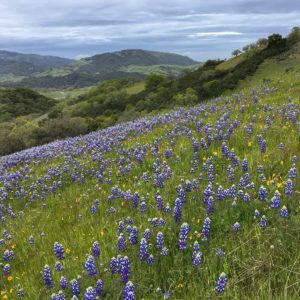 WILDFLOWER BONANZA
A wet winter combined with on and off sunshine this spring created a wildflower bonanza (field lupine, meadow foam, shooting stars, poppies and popcorn flowers, baby blue eyes and sun cups) on The Preserve. 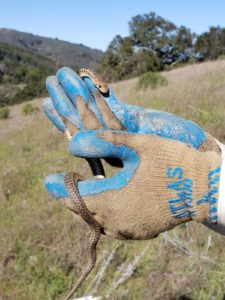 GOPHER SNAKE
These harmless snakes are frequently mistaken for rattle snakes due to a similar coloration, size and mimicking rattlers’ defense mechanism. Like most snakes, gophers are nature’s natural rodent control and named for their tendency to live in gopher burrows. 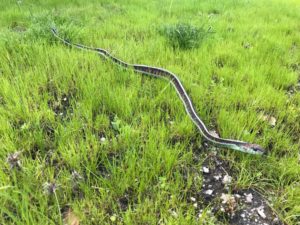 COAST GARTER SNAKE
We caught a glimpse of this beauty on a trail in early April. The Coast garter snake is a non-venomous constrictor. Some male garter snakes emit female hormones to fool other males to try and mate with them just to keep warm. 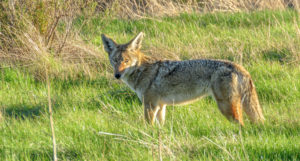 COYOTES
It was an active denning season on The Preserve for coyotes this year. Thank you for giving the coyotes space during a particularly sensitive time of the year. As we shift into summer it seems the coyotes that were denning near the Chicken Flats and Robinson Canyon trailhead have also shifted. There have not been any recent reports or issues with coyotes in the area, so the Robinson Canyon Trail is once again open to all recreational activities again. 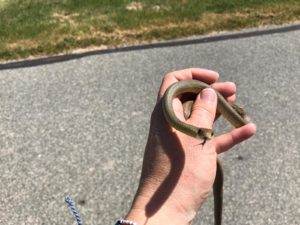 WESTERN YELLOW-BELLIED RACER
This non-venomous snake is endemic to the western United States and is aptly named for its speed. This wee individual would have been crow food if Conservancy staff hadn’t gotten to it first. 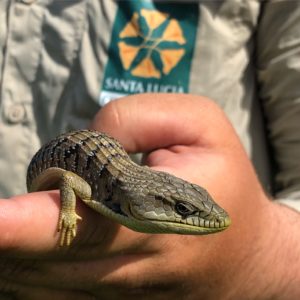 ALLIGATOR LIZARD
Did you know that alligator lizards help keep hikers and outdoor enthusiasts healthy? A protein that exist in their blood kills the Lyme bacteria in infected ticks. If you zoom in, you can see small black dots, which are ticks, alongside the lower jaw of this alligator lizard. 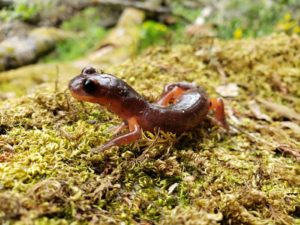 ENSITINA SALAMANDER
Unique among vertebrates, these amphibians have the ability of regenerating lost limbs and other body parts. Since they lack lungs, these animals breathe through their moist skin. Their presence is an indication of healthy riparian ecosystems. 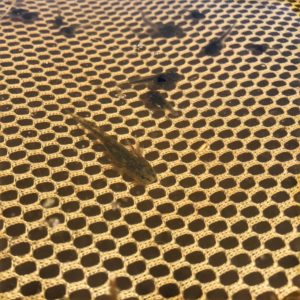 TIGER SALAMANDER TADPOOLS
At a recent pond survey on Peñon, we were elated to find eight tiny California tiger salamander tadpoles. These endangered animals remain arboreal most of their adult life, returning to our ponds only to breed. Females have only a 50% chance of breeding more than once throughout her lifespan of approximately 25 years. 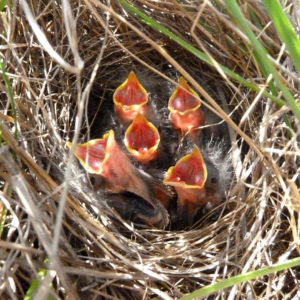 GRASSHOPPER SPARROWS
In its eighth year of grassland bird surveys, the Conservancy is happy to report birds throughout The Preserve – a strong indication of how species are responding to the grazing program. Grasslands are not only habitat for deer and bobcats, they are essential nesting habitat for some birds, including buzzy voiced grasshopper sparrows. 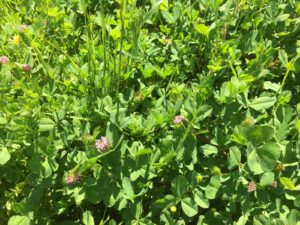