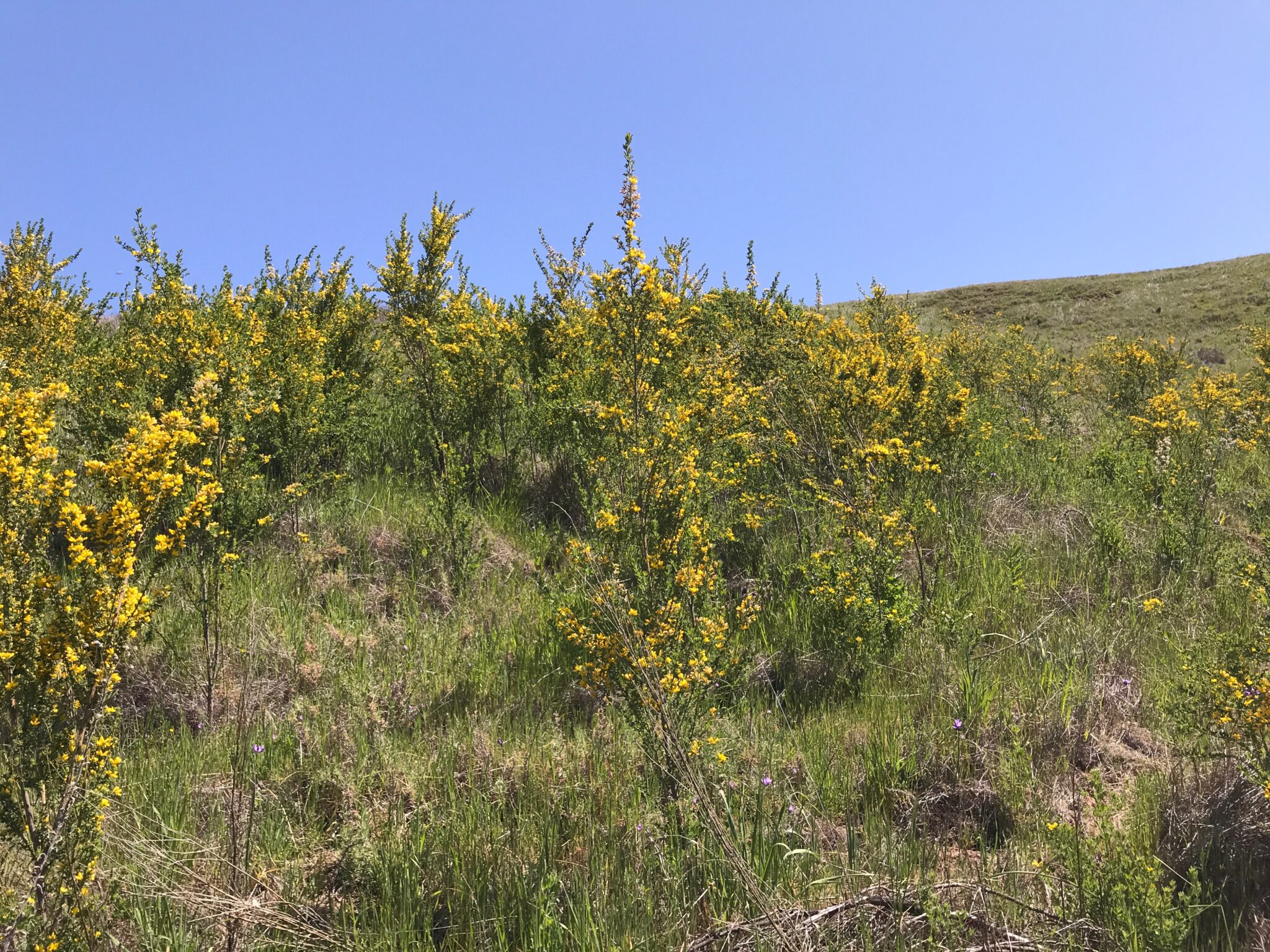 A thick stand of French broom before the field crew removed it at Penon Peak Gate. Photo by Jackson Brooke.

I start my day facing a wall of French broom or a field full of thistles, and end it by looking back at the same area now strewn with invasives that have been ripped from the ground, cut down with a weed whacker, or coated in herbicide. At the end of each day, I can proudly point to the clear, tangible effect I have had on the landscape.

My position was created as part of this Grasslands Initiative, and I’m often struck by just how rewarding my job is. Our work produces immediate, visible results. To a casual observer, however, the daily progress made on invasive species removal can be difficult to gauge. Photography is one of the most powerful tools for conveying the dramatic effects of our work in the field. Pictures allow us to show the stark change between a field before active management and after, as the native species take hold of the places where weeds once dominated.

Most invasive species spread via two main pathways: downhill following gravity, and along roads and trails moved by wind, vehicles, and people. It stands to reason, then, that for effective management it’s important to target the invasive species populations at higher elevations and along roadsides first. The grasslands along Rancho San Carlos Road northwest of Cantera Run fit both of those criteria, which is why they are among the top priority areas we treat with our seasonal field crew each year.

BEFORE: A thick stand of French broom was growing in the middle of the grassland along Rancho San Carlos Rd., with plenty of opportunity to expand downhill if left untreated.

AFTER: The 2020 field crew spent several weeks in this area, and this patch in particular took the better part of a day to remove, creating a striking difference.

The focus of much of our work with French broom is on preventing it from encroaching upon our grasslands and oak savannas and turning them into scrublands. Areas on the forested edges of grasslands are particularly important for limiting French broom encroachment.

BEFORE: The Steam Donkey Trail, starting at the Williams Canyon trailhead, winds through both grassland and forest habitats, and unfortunately displays French broom’s incredible propensity for invading both.

AFTER: When our 2021 field crew removed this patch, they made sure to bring their weed wrenches as some of the individual plants were as large as a mid-sized tree! As you can see, they didn’t let that stop them from removing all of the French broom, both big and small.

BEFORE: The area around the gate from Robinson Canyon Road to Penon Peak Trail has a number of invasives but our focus here is to remove the nasty French broom.

AFTER: This area has been treated for a couple of years. Each year we’re able to push a little farther and get to new patches. In 2021 we found an area with some good sized French broom but they were no match for the seasonal field crew, who used the advantage of moist soil in the winter and spring to hand pull every last one.

BEFORE: Along the Robinson Canyon Trail there are some areas where the French broom grows right up next to, or even on, the trail. These populations that are visible from the trail are usually the tendrils of an uphill population trying to expand.

AFTER: Removing French boom in areas under and around trees, particularly oaks in the oak savannas, is crucial because the weed acts as a “ladder fuel.” Left unmanaged, a wildfire traveling along the ground and understory uses it to climb up into the tree canopy, making the fire much more intense, destructive, and difficult for firefighters to tackle. The 2020 seasonal field crew climbed up a steep hill above the trail to take out this dangerous stand.

We want to hear from you

Thank you for taking an interest in our work to remove French broom! If you have questions about how you can eradicate this pesky weed on your own property, please reach out to me, Jackson Brooke, at jbooke@slconservancy.org.