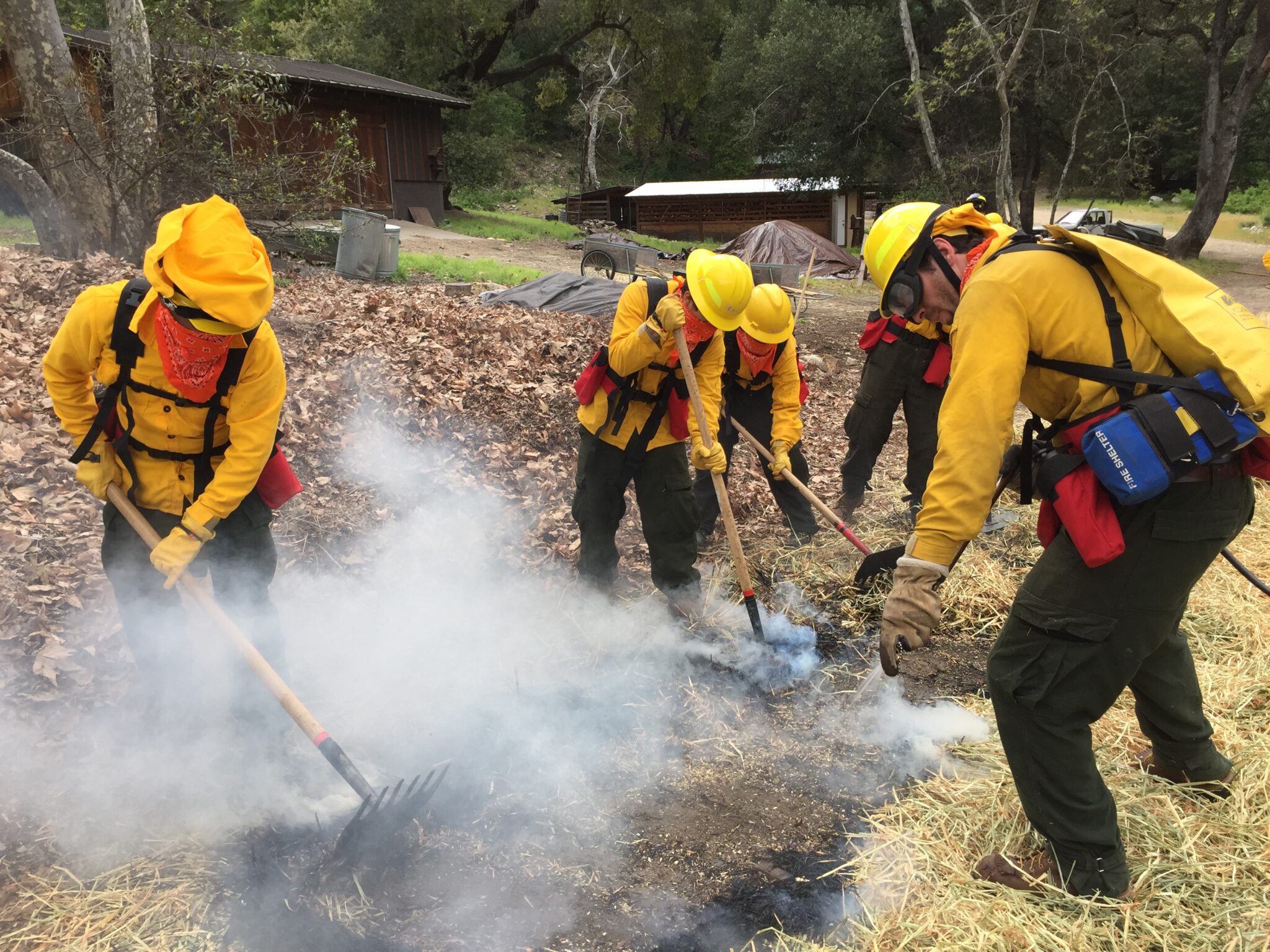 Members of staff from the Santa Lucia Conservancy participated in the 2018 Tassajara Fire Training.

On November 7, the Santa Lucia Conservancy and Central Coast Prescribed Burn Association (CCPBA) plan to conduct a prescribed burn on The Santa Lucia Preserve, just off of Rancho San Carlos Road in Carmel Valley. Because prescribed burns are dependent on weather conditions, the date of this burn is subject to change with little notice. We expect to know whether the burn will go forth as planned by Friday, November 5, and this blog post will reflect any changes.

History of Prescribed Fire on the Santa Lucia Preserve

In 2007, the Santa Lucia Conservancy began working with a number of local, state, and federal fire agencies to initiate a Prescribed Fire Program on the Santa Lucia Preserve. The first burn was successfully conducted in 2009 on two small grasslands, the Mesa Trail Burn Unit and the Northeast Flats Burn Unit, covering a total of 47 acres.

Since then, the Conservancy has continued to develop the program. We conducted prescribed burns in San Francisquito Flats in 2010 and 2012, and around Moore’s Lake and Ohlone Pond in 2015. To date, we have sponsored four members of our staff in acquiring Wildland Firefighter Type II (FFT2) certifications, participated in prescribed fire workshops, and assisted with several prescribed fires in the region through the CCPBA.

California’s ecosystems have adapted to fire and many native plants and animals depend on low-intensity fires burning at regular intervals in order to thrive. After a century of fire suppression that has resulted in a sharp increase in catastrophic wildfires across the West, cultural and prescribed burning are finally being recognized and encouraged as necessary tools for restoration. In the absence of fire, fuels accumulate, habitats degrade, and invasive plants proliferate. Prescribed fire is one of the most effective tools for managing large areas of natural habitats for the benefit of both people and wildlife.

Safety is Our Top Priority

To ensure that our community is safe during prescribed burns, standard safety procedures require a number of planning documents, collectively known as the “burn plan.” These documents outline the ecological goals of the burn, the personnel required, the equipment needed, a narrow window of acceptable weather conditions, contingency planning, and required air quality and burn permits. In addition to the burn plan, the Santa Lucia Conservancy implements more stringent safety procedures, including road closures and viewership limits during the burn.

The safest and most effective time to burn mixed grassland and chaparral habitat types is during the fall after the first rain of the season, when the target plant species are under stress from a long dry season, but there is plenty of moisture present to ensure containment of the fire. In October, The Preserve’s Community Services District (CSD) worked with Conservancy staff to complete preparation of the site, which included some brush pre-treatments in the experiment areas and mastication of the containment lines.

Goals of the Burn

Our goals for this particular burn are three-fold. First, we aim to use prescribed fire to protect the Preserve community from the threat of catastrophic wildfire by removing highly flammable brush from Rancho San Carlos Road, which is a primary ingress and egress route and an important location for containment should a wildfire approach The Preserve from the southwest.

Second, in alignment with our Grasslands Initiative, we aim to clear out the coyote brush that has encroached upon the ecologically important native grassland in this area in an effort to improve habitat for a host of grassland-dependent wildlife, particularly endangered California tiger salamanders and tricolored blackbirds.

Third, in collaboration with the University of California Cooperative Extension and San Jose State University, we are conducting a scientific study to understand which pre-treatment—mastication and mowing, chain-sawing, or crushing—is most effective in killing coyote brush when followed by prescribed fire. Each of the three pre-treatments covers a 15 meter diameter plot of the burn unit, and researchers will measure flame length, rate of spread, temperature, and mortality to assess the success of each treatment.

Immediately after the burn, we expect to see both completely black and partially burned shrub skeletons scattered across the unit.  As the autumn rains percolate nutrients from the fire down into the soil, we expect to see fewer coyote brush shrubs grow back in the spring, making more space and water available for some native grasses and wildflowers to sprout up in 2022. The Conservancy will continue restoration operations in this area after the fire to help native grasses reestablish. These efforts will include grazing and targeted weed and brush management in partnership with the landowners. With time, we expect native grasses and wildflowers to repopulate the landscape, providing critical habitat for wildlife and a safer ingress and egress route for the Preserve community.

The Santa Lucia Conservancy will conduct this burn with the close coordination of a number of local, state, and federal agencies. The CCPBA will be coordinating the burn under the direction of Burn Boss Phil Dye of Prometheus Fire and Cachagua Fire Protection District will be in attendance.