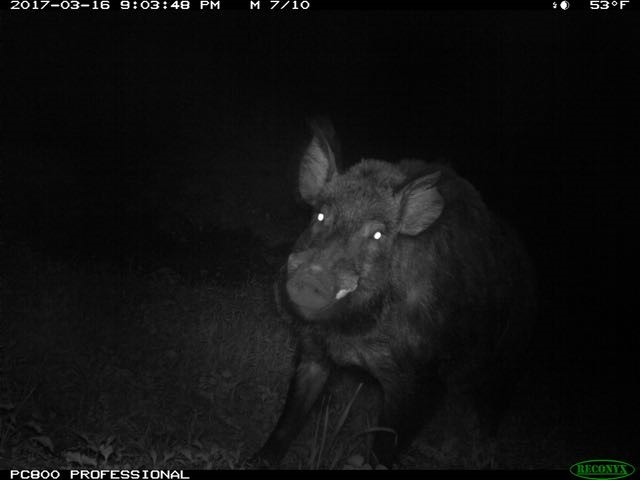 Wild pig caught on a camera trap set up in the Garzas neighborhood of The Santa Lucia Preserve. Photo courtesy of Rich Griffith.

Whether you have directly observed wild pigs (Sus scrofa) foraging on The Santa Lucia Preserve or not, you have likely noticed the damage that this invasive species can have on habitats both inside and outside of The Preserve’s homelands. You may have woken up to your landscaping or garden torn apart or observed the soil disturbance that occurs along the Preserve’s roadsides and oak woodlands.

Since the first winter rains arrived, the Conservancy has received a considerable uptick in reports of wild pig damage across the Preserve. Each year, the pigs travel through The Preserve in the fall to forage before moving east later in the winter.

Wild pigs, which are hybrids of the European wild boar and domestic pigs, are a considerable management challenge across the state and in the Central Coast region in particular. They’re estimated to cause $4 million in ecological damage per year statewide. Introduced by George Gordon Moore, the owner of Rancho San Carlos in the 1920s, wild pigs are highly adaptable to changing environments and reproduce rapidly.

According to Reginald Barrett, a recently retired UC Berkeley professor who is considered the “godfather” of California wild pig research, “Pigs can go from one per square mile to 100 per square mile in three years. They can reproduce so fast that you’d have to kill 70 percent of them per year just to keep the pig population even. With two years of good rain and a good crop of acorns, you’d see wild pigs on the front page of every newspaper in California.”

These factors make wild pigs extremely difficult to control or eradicate at the landscape scale. Still, there are several preventative measures you can take to reduce visitation and damage on your property. Unfortunately, there are no effective repellents for wild pigs and hazing them is neither safe nor effective.

Wild pigs are thought to be particularly attracted to overly moist landscapes and to vegetable crops, so ensure that your existing landscaping is not overwatered and keep garden gates  secured. In some cases, rooting activity may occur only as an isolated event, while in other cases, pigs may return to preferred foraging locations on multiple occasions.

In the latter case, we encourage Preserve residents to work with The Preserve’s Design & Construction Services (DCS) to design appropriate and effective fencing to exclude wild pigs. Simple, strong fence designs have been shown to be effective in excluding wild pigs from small to medium sized areas. Please note that fencing is only permitted within the Homeland boundary and should not extend into your Openlands.

The Conservancy continuously evaluates the best management practices for invasive and non-native species, including wild pigs. Depredation, the killing of wildlife permitted by California Department of Fish and Wildlife under DFW 543, has not proven to be a successful measure for controlling wild pigs or reducing their destructive activities on The Preserve due to the small-scale approach of individual landowners attempting to remove only specific animals or a sounder (group) of pigs. As the species is widespread, reproduces rapidly, and moves through the landscape seasonally, new pigs will quickly take the place of those killed.

There has only been one successful mainland eradication effort in the region. It was both extremely costly and required permanent fencing to effectively exclude new pig populations. At Pinnacles National Park, the eradication of wild pigs took over two years, required an initial investment of over $2.5 million dollars, and now requires annual maintenance is excess of $50k – all to exclude wild pigs from an area 6,000 acres smaller than The Santa Lucia Preserve.

Costs aside, if we were to exclude wild pigs by permanently fencing the entire Preserve, we would also prevent the free movement and migration of the native wildlife that depend on The Preserve’s unique biological resources including mule deer, bobcats, black bear, and mountain lions. Many of our conservation objectives hinge on The Preserve’s role as an important wildlife corridor, so permanent perimeter fencing is not a feasible management tool in this context.

Coexistence with wildlife, whether native or non-native, is a complex relationship that makes living on the Santa Lucia Preserve a unique and often rewarding experience. We strongly encourage Preserve residents to report wild pig behavior and any other wildlife-human conflicts to the Santa Lucia Conservancy. This input is extremely valuable, as it allows us to refine our monitoring programs and work to find the best, science-based management solutions for both people and wildlife.

Please contact Conservation Ecologist Dr. Brian Woodward at bwoodward@slconservancy.org or (831) 402-2001 with any questions concerning wildlife. Fence design questions for Homelands can be directed to The Preserve’s Design & Construction Services Department at (831) 620-6791.