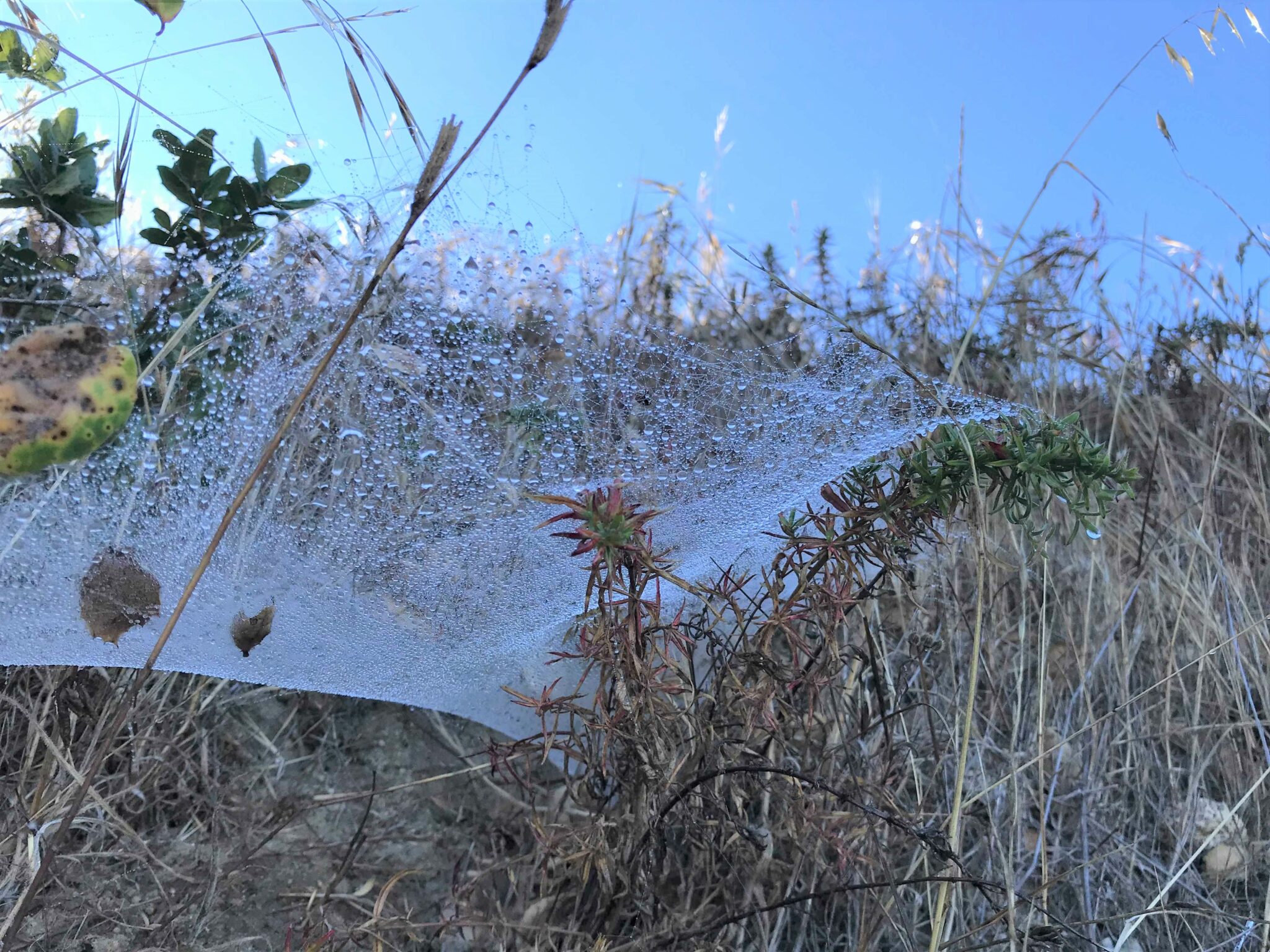 Dew collected by a spider web. Photo by Andrew Evans.

You may know that California is special for its unique climate and diverse range of habitats. The Mediterranean climate in the Central Coast Region, which is uncommon globally and characterized by wet winters and dry summers, is overlaid by cool fog on summer mornings that tends to clear out by midday. The entire California Coast, as well as a bit of Baja and Oregon, make up the California Floristic Province, one of the globe’s critical biodiversity hotspots. Biodiversity hotspots are regions classified as those with high levels of endemic plant species that have already lost at least 70% of their vegetation or habitat area.

Fog doesn’t provide water to plants, habitats, and landscapes in the same way as rain. It can’t drip water directly onto the ground on its own, but it does provide intense humidity. That daily morning blanket of humidity helps curb the dryness of our summer afternoons. The fog helps limit plants’ loss of water and some plants can even extract water from the fog.

For a plant struggling to thrive in seasonally dry ecosystems, any trick to tap into a water source gives it a leg up. While perennial grasses reach down with absurdly deep roots, other grasses get their water by reaching up. When our Grazing Program Manager, Claudio, and I walk through a pasture on an especially foggy morning, we emerge with soggy pants—every individual blade of grass and seed-head provides a surface for fog to condense on, which then catches a ride on our legs. When not soaking our jeans, that fog drip runs down the grass stalks and seeps into the soil, feeding the plant just enough to make it through the dry months.

Trees and shrubs have an even greater fog catching opportunity. Many shrubs and trees have adapted upturned or tilted leaves to avoid the harshest sun exposure, and these leaves are also primed to catch fog. When the leaves are tilted (go out and look at the leaves of an oak or coyote brush), the water will drip from their branches down to the soil and feed their roots. Some mornings, if you’re quiet enough, you can hear the sound of rain when it’s not raining. That’s the glorious manifestation of the fog drip.

Plants already make their own food. Imagine “making” your own water, too. That’s what the power of fog provides.

But while there is this wicked cool interaction between plants and fog, fog doesn’t reach everywhere, and even in areas where it does, the fog may not condense enough to be an effective source of water. In the Santa Lucia Range, that means the plant communities on peaks and ridges live a more parched life without that heaven-sent sky drip that the low-lying communities are soaked in.

The variable fog coverage helps create a diverse landscape, some habitats within its misty reach and others just outside. Creating a mosaic of climate factors, fog exaggerates our heterogeneous (different between locations) resource availability, and therefore encourages different plant assemblages (species present in a given spot) between closely neighboring habitats.

Peñon Peak is an excellent example. The Conservation Grazing Program’s herd of 98 cows rotated around Peñon throughout the summer of 2021, so we witnessed the fog fill and empty the bowl-like valley below day after day.

Fog rarely blew over the peak itself, so there was only enough water to support grass communities at the top. But as we shuffled down the Western-facing slopes, we and the cows began to pass through brushy chaparral and then into fully canopied oak woodlands with lace lichen (another species that sponges up fog) swaying from the branches. The gradient of fog creates an ecotone along the Peñon slopes where oat, Danthonia, and Elymus grasses live right above lupines, coyote brush, and manzanita, which live above oaks and eventually redwoods at the valley floors. Where else can you see such an exemplary gradient of moisture-driven biodiversity?

Fog is also a key to survival for the endangered Smith’s blue butterfly, which is endemic to the Central Coast of California and depends entirely on just two species of buckwheat (Eriogonum latifolium and Eriogonum parvifolium). Buckwheat is coastal and only grows on bluffs and slopes with ample soil drainage and moist maritime air. That’s fog! The tendrils of fog that reach into the Carmel Valley allow the coastal buckwheat to grow on The Preserve, creating critical habitat for the Smith’s blue butterfly.

Why is the Central Coast of California a biodiversity hotspot? Fog is a big contributor. Its interaction with the landscape creates unique microclimates for our uniquely adapted plant species, all the while giving us cozy mornings and spectacular views. It’s one of the things that makes the Santa Lucia Range and the Central Coast particularly special.