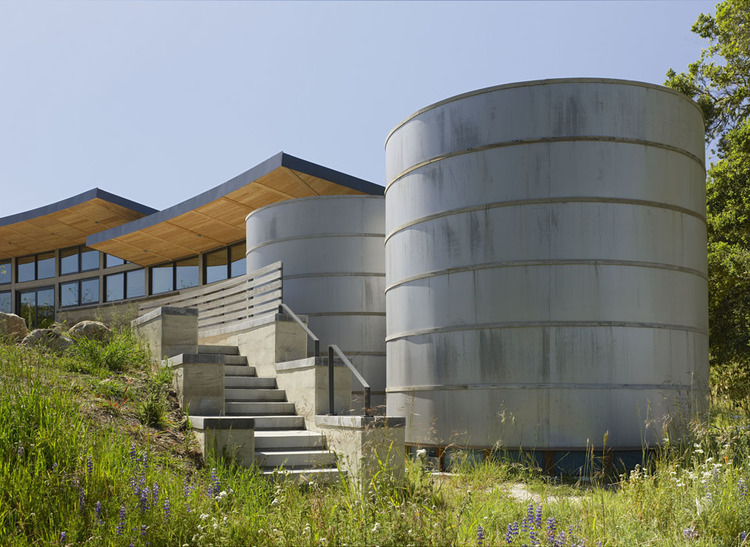 Kate Kennedy’s stormwater collection tanks at her home on The Preserve. Photo by Joe Fletcher.

On a foggy afternoon in December, I drove up to The Preserve and parked next to three massive tanks that make up Preserve Resident Kate Kennedy’s 30,000 gallon stormwater collection system. Kate’s home is known as the Caterpillar house, taking its name from the articulating footprint that follows the ridgeline of the land. Designed by Feldman Architecture and built by Groza Construction, the award-winning home features rammed earthen walls made from soils on site, Douglas Fir detailing, and expansive glass doors that open up to a patio overlooking the serene oak savanna.

The 2,800-square-foot modern ranch style house has a two-part roof that funnels water from her gutters into the tanks at the north end of the main house.

Two dogs follow us as Kate zips up her rain jacket and leads me around to the back of the cylindrical tanks. Each tank is about 15 feet tall and 12 feet in diameter. They are all connected, so they fill at the same rate. Since Kate irrigates uphill, there’s a pump that sends water from the tanks through the irrigation lines on a timer, which is easily set using a dial.

Gesturing to a round, wide bed of gravel where it looks like a fourth tank should be, Kate says, “The amount I can collect is only limited by two things: the amount of rain we get and the size of the tanks. I usually fill them all up within the first three winter storms and run out in September or October.”

In addition to living in alignment with the sustainable development focus of the Santa Lucia Preserve, climate change was an important factor in Kate’s decision to incorporate a water catchment system into the design of her home and it’s the primary reason she’s decided to have a fourth tank installed. It will bring her total water storage capacity to 40,000 gallons.

“I’ve only emptied the tanks during two summers out of the twelve years I’ve lived here, but I know I’m going to have to ration the water more and more because the irrigation season has gotten longer.”

Part of the success of Kate’s water catchment system is due to her minimalist landscaping by Joni Janecki + Associates, which covers less than an acre and is kept green year-round. Highly drought tolerant and complimentary to the home’s natural essence, Kate grows native species including yarrow, California fescue, emerald carpet manzanita, and the lavishly flowering hybrid desert willow Chitalpa tashkentensis. She also uses the water from her roof to irrigate a small vegetable garden, but leaves the remainder of her 2.8 acre Homeland alone.

“I didn’t need much landscaping, the land is pretty as it is,” Kate says, looking out at the hills of bunchgrass with wisened old oaks contorting their limbs behind the descending clouds.

There are many different kinds of stormwater collection systems on the market today, according to Cody West, President/CEO at Groza Construction. “We just did a project in the middle of the desert that’s collecting 30,000 gallons per year, and another at a winery in California collecting 100,000 gallons in a below-ground reservoir made up of lego-like tanks,” West said. “You can harvest an unbelievable amount of water from the roof of even a medium-sized home.”

Kate encourages Preserve residents who are considering installing their own stormwater collection system to do so, and she’s happy to show her system to folks who are interested in making their home more drought resilient.

Do you incorporate ecologically sensitive or climate change resilient elements into your home on The Preserve? Reach out to me at asoliman@slconservancy.org if you’d like to share your approach!