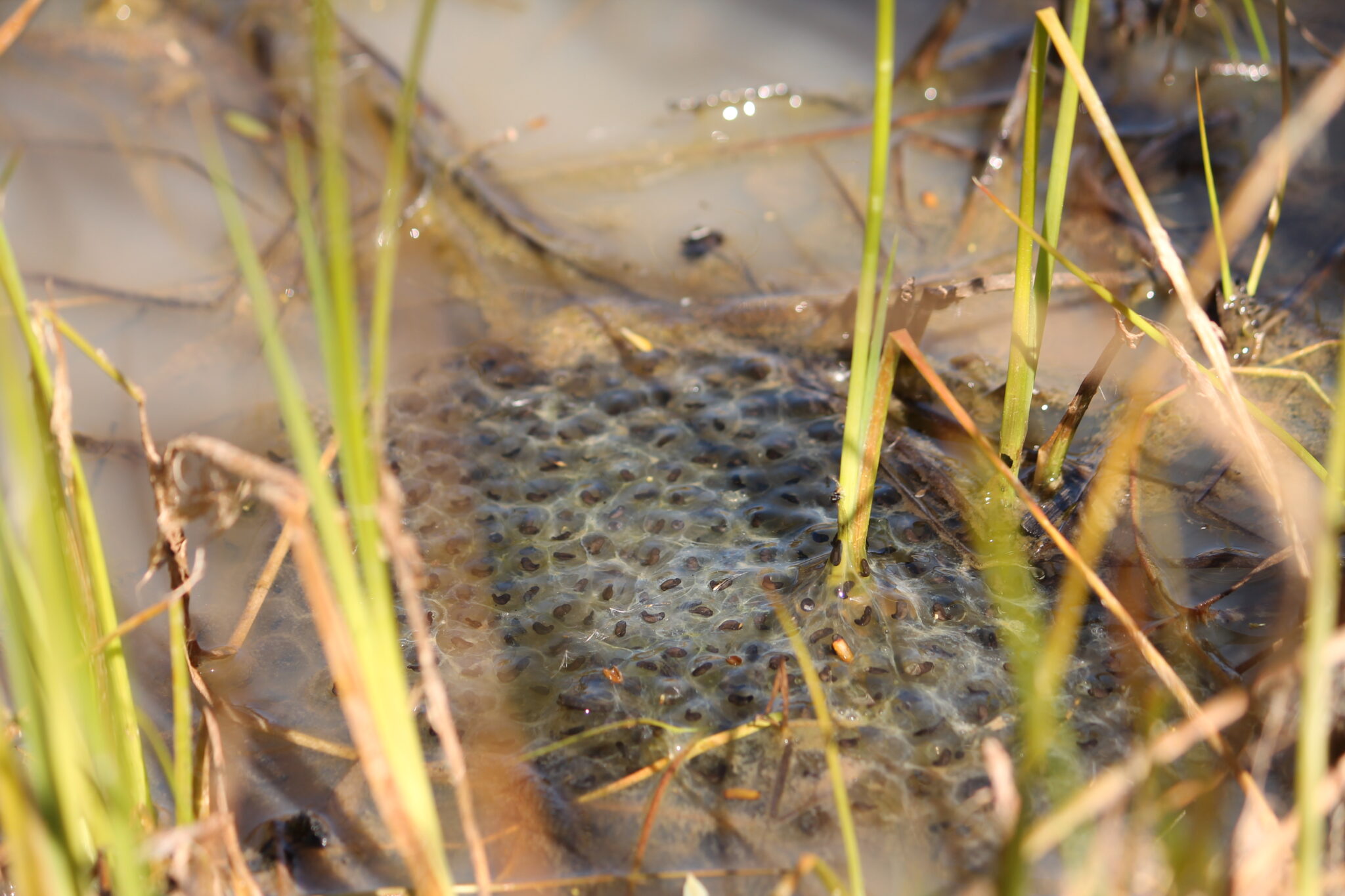 A mass of California Red-legged Frog eggs rests at the surface of a pond on The Preserve. Photo by Alix Soliman.

A major development in fish and wildlife monitoring, Environmental DNA (eDNA) is a scientific method that can tell us whether a species is present in a given area by testing the water, soil, or air for traces of genetic material. Last year, the Conservancy began partnering with Washington State University (WSU) to use eDNA to detect two federally threatened amphibians in ponds on The Preserve: the California Tiger Salamander (Ambystoma californiense) and the California Red-legged Frog (Rana draytonii). This collaborative project is testing the method’s effectiveness in aquatic environments and as a tool for wildlife conservation efforts.

The California Red-legged Frog and the California Tiger Salamander depend on ponds for breeding as well as suitable upland habitats where they spend most of their adult lives, making The Santa Lucia Preserve an incredibly important place for these rare amphibians. They are endemic to California, meaning they live no where else on earth, and their survival rests on conservation efforts. Statewide, both species are facing habitat loss due to development, agriculture, and the encroachment of invasive species.

In years past, the Conservancy sampled 8 ponds known to have special status amphibians, but this year, we’ve ramped up our eDNA surveys to include all 36 ponds on The Preserve as well as 4 ponds at Palo Corona Regional Park. Conservation Ecologist Dr. Brian Woodward, Washington State University Graduate Student Mitch Ralson, and Amphibian Ecologist at Elkhorn Slough Reserve Inger Marie Laursen are conducting the field work to track the species’ distribution over time.

Early on a Tuesday morning, the researchers gather with a goal to survey 16 ponds in one day. We pull off of Rancho San Carlos Road at our first pond, an unassuming algae-filled puddle with about 2 inches of standing water left. Flies buzz and chorus froglets no larger than a #2 pencil eraser emerge, having just metamorphosed.

“This looks like a good pond for CTS [California Tiger Salamanders],” Mitch says as he pulls the sample coolers out of the back of Inger Marie’s truck. “There’s not much vegetation around the edges, it’s had some disturbance, and it’s vernal.” Installed for cattle back when The Preserve was a working ranch, this pond dries up each summer. Deer have come to take their fill of water and browse the surrounding habitat, as evidenced by their hoof prints, munched grasses, and narrow trails going off into the woodland to the West.

After Inger Marie records information about the surrounding environment on the data sheet, it’s time to take eDNA samples. All organisms consistently shed cells into their surroundings. Just as humans shed skin cells and leave DNA in dust bunnies, aquatic animals shed DNA through eggs, mucus, or feces into the water around them. This simple fact forms the basis for the method.

Mitch collects a water sample from the edge of a pond on The Preserve. Photo by Alix Soliman.

Mitch carefully pulls on a pair of latex gloves, fills a few plastic bags with water at different locations around the pond, ties them off and labels them, then places them in a cooler at 45 degrees Fahrenheit to slow the degradation process that DNA naturally undergoes. To guard against any interference caused by particles in the air, Inger Marie bags distilled water from a jug as control samples for the experiment.

They will send the samples from each pond back to the Goldberg Lab at Washington State University to test them for trace amounts of genetic material left behind by California Tiger Salamanders and California Red-legged Frogs. While eDNA can be tested for every organism present in an environment, this project targets only the DNA from our species of interest using polymerase chain reaction (PCR) testing.

Dr. Sabine Cudney and Dr. Christy Wyckoff drag a mesh seine through a vernal pond on Penon Peak in 2021. Photo by Alix Soliman.

Environmental DNA is not the only method the Conservancy uses to find rare amphibians. To collect population and habitat data, the Conservancy sweeps a mesh seine through many ponds on the Preserve on an annual basis. Two scientists stand on either side of the 8 foot by 4 foot net, holding the vertical poles at either end, and quickly walk through the pond while poking the poles at the bottom to drag the net across the sediment and pull up as many aquatic species as possible. When they get to the other side, they hold the net horizontally at the surface of the water and take a count of the larvae of each species.

Each method has benefits and drawbacks. Dipnetting is the current standard for tracking pond populations, required by the US Fish and Wildlife Service, while eDNA is being analyzed as a comparative method for targeting species detection.

Although it is a more disruptive research method (as the scientists are required to walk through the pond, mix up the sediment, and directly handle the wildlife), dipnetting helps researchers understand where the animals are in their lifecycle, how many there are, and gives us a deeper look into habitat quality indicators like the abundance of invertebrate larvae. While dipnetting and seining will remain important methods in the future, eDNA is emerging as a practical way to establish the presence or absence of a species.

A California Red-legged Frog tadpole is raised from the net, counted, and then returned to the pond. Photo by Alix Soliman.

Additionally, eDNA takes less time and requires fewer hands, making it a more cost effective option for endangered species detection. “We have over 30 ponds on the property and a number of ephemeral water features that could support these species. In 2022, eDNA testing has allowed us to sample nearly all of these habitats for the presence of our threatened amphibian species, a feat we could have never accomplished with dipnetting alone in a single year in the past,” Dr. Woodward said.

So, when our research question boils down to, “are California Tiger Salamanders here or not?” eDNA has considerable potential to improve detection, allowing the Conservancy to rapidly adapt our pond management to best conserve these threatened amphibians.

To date, scientists across the world have used eDNA to detect whales and dolphins in the Atlantic, find extinct animals from the Pleistocene Epoch using cave soils in Arizona, uncover a mid-Holocene plant community in the Quelccaya Ice Cap in Peru, and have adapted the method to detect COVID-19 in the air and human wastewater. The limits of eDNA have yet to be reached, and the threatened amphibian detection project on The Santa Lucia Preserve is helping test its power in the field of conservation.