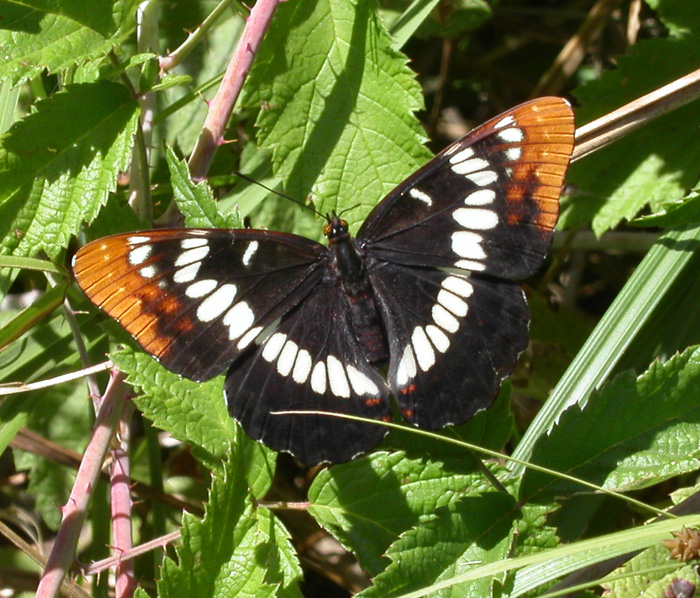 As far as insects go, the Central Coast is most famous for the annual arrival of the Monarch butterfly from late November to December. Having migrated 1,000 miles or more (traveling 50-100 miles per day) from summer breeding grounds in the Rocky Mountain Region to coastal California, Monarchs spend the winter here sheltered from cold temperatures and storms.

Throughout the summer, however, Monterey County is home to a plethora of other species that – when they land for a moment – anyone with a keen eye and a naturalist’s patience can learn to distinguish.

Peñon Peak, Long Ridge, and the top of Trapper’s Loop are some of the best sites on The Preserve to observe butterflies in the spring and summer due to a widespread behavior known as hilltopping. When it’s time to mate, males will flutter to and stay at the peak, defending a small territory for days on end by chasing other males off of preferred plants as they await a receptive female to breed with.

The resulting high concentration and diversity of butterflies at hilltops make such peaks important research sites for entomologists. Every summer, Pinnacles National Park Biologist Paul Johnson and his fellow researchers come to The Preserve to conduct a survey as part of the Monterey Butterfly Count, one of about 450 butterfly counts across the continent.

“When we look at the data from all the counts over time, we can detect large scale changes in population sizes, distribution, and seasonal timing,” Paul says. “We can then work on determining the causes of those changes and what we can do to remedy them. Causes might be large scale like climate change, pesticide use, and development, or small scale, like invasive plants crowding out native plants.”

A Pale Swallowtail, Western Tiger Swallowtail, and three Echo Azure butterflies drink at a “puddle party” on The Preserve. Photo by Paul Johnson.

Mud puddles are another great place to search for butterflies. The fluttering socialites attending these “puddle parties” are mostly male, leading scientists to believe that water isn’t the only draw. Some entomologists suggest that male butterflies drink from mud puddles to replenish dissolved minerals like sodium when mating, while others hypothesize that the minerals concentrated at these sites help regulate body temperature.

In 2012, the Monterey County butterfly species count record was set at 49 species, and this year, Paul and his team counted 35 species (and a total of 393 individuals). Of all the species they identified, here are 10 common ones to keep an eye out for:

As their name suggests, this butterfly is highly variable in coloration and comes in checkered brown, black, white, yellow, orange, and red with a wingspan ranging from 2.2 – 3.2  inches. Females lay clusters of eggs on larval host plants such as figwort, sticky-monkey flower, Indian paintbrush, and snowberry. This larval diet is rich in catalpol, a chemical compound that makes the butterfly unappetizing to avian predators. Scientists believe the butterfly developed this consumption strategy, in addition to bold coloration, in order to defend itself from birds. After hatching and munching on the host plant, larvae find shelter under bark, in rock crevices, or in hollow stems and go through a period of diapause, which is a state of dormancy where physical development halts and consumption slows dramatically. The pupae emerge as butterflies in April and fly through June. An adult’s life span is about 15 days.

The Calippe Fritillary appears in colors from the tawny of a newborn fawn to rust or orange with consistent black zig-zag stripes throughout and white, yellow, or tawny spots lined with black on the outer margins of the wings. The underside is primarily silver and mirrors the design on the top of the wings. Females lay one brood of eggs in the leaf litter beneath the host plants, which include several species of violet such as the Johnny jump up (yellow pansy), dog violet, and Douglas’ violet. Without eating, caterpillars undergo diapause and emerge in the spring to feed on violet leaves before they metamorphose and fly from June through August.

With a large, 3.5 – 4.5 inch wingspan and elegant pattern matched only by the very similar Western Tiger Swallowtail, the Pale Swallowtail is difficult to miss and easy to identify. Triangular in shape, its wings are cream colored with eight black stripes that run parallel to its abdomen and black edges with small white “stitches” along the outer margin. The hind wings feature small orange and blue spots and terminate in a long tail on either side. Single eggs are laid on host plants including Ceanothus, coffeeberry, and alder. The large, tasty looking caterpillar defends itself using an organ called the osmeterium, which protrudes from the head, looks like a snake tongue, and excretes foul-smelling acids to repel predators. Caterpillars enter the chrysalis stage in the fall to overwinter and emerge as adults from April through August. Adults live for 6-14 days and spend their time feeding on nectar from plants such as California buckeye and yerba santa, attending puddle parties, and mating at hilltops.

The California Sister is best recognized by the large and defined orange patch at the tip of each forewing.  The rest of the butterfly is dark brown or black with a band of white spots in the center of each wing running parallel to the outer edge. It has a 2.5-4 inch wing span. Typically difficult to spot in flight, there are also dark turquoise and jasper patches on the forewing beside the thorax. It lays eggs singly on the tip of an oak leaf (especially on coast live and canyon live oaks), a larval diet that makes it unappetizing to predatory birds. This adaptation has led other species to mimic its appearance over time, such as Lorquin’s Admiral. There are typically two or three generations of the California sister each year. For instance: the first brood emerges in the spring then reproduces and dies; the larvae of the first brood then emerges, reproduces, and dies in the summer or autumn; then the larvae of the second brood overwinters and emerges the following spring as that year’s first generation. Adults live for about 30 days and fly between March and October. Adults eat a diverse diet that includes nectar from California buckeye and coyote brush as well as carrion, rotting fruit, dung, and aphid honeydew.

Like the California Sister, Lorquin’s Admiral has black or brown wings featuring orange patches at the tips and a band of white spots in the middle. This species has a wingspan of 1.8-2.8 inches and is most easily distinguished from it’s look-alike by the lack of shape and definition in the orange wing-tip patch. Found in riparian and wetland habitats, females lay single eggs on the tips of willow and aspen leaves. Lorquin’s Admiral typically produces two generations in California per year, with the first brood emerging and on the wing between April and June and the second between August and October. The male Lorquin’s Admiral is known to be quite territorial, choosing a favorite perch site and defending it by chasing away other insects (and sometimes birds!) that draw near. Adults live for about 30 days and eat a similar diet to the California sister, making them that much more difficult to tell apart.

The Common Wood Nymph has a wingspan of 1.5-2.5 inches and is most easily identified by the two large black eyespots ringed in yellow on each forewing, sometimes surrounded by yellow patches. Though this widespread butterfly comes in many color variations, the rest of the butterfly is typically an ashy tan or brown and features a few smaller eye spots (usually on males) as well as scalloped edges on the hind wings. The Common Wood Nymph is a poor and erratic flyer found in grasslands, marshes, and woodland edges. While females may live for a couple months – eating nectar, dung, and rotting fruit and laying 200-300 single eggs on grasses or in thatch late in the season – males live for only a few weeks and tend to eat less or not at all. Larval host plants include grasses like cane bluestem, one-sided bluegrass, and needlegrass.

Extremely widespread across North America, the lackluster Common Ringlet varies widely in color based on geographic location. On the west coast, it is usually light tan and cream with a small black eyespot on each forewing and sometimes several smaller eyespots on the hindwings. The underside of the hindwing is grey or tan with a wavy median line that’s a shade or two lighter. This butterfly has a wingspan of 1.2 – 1.5 inches and is found in grassy areas. It’s a poor flyer and is usually seen hopping and fluttering close to the ground, patrolling for a mate or drinking the nectar of flowers, and resting with wings closed. Larval host plants include valley sedge, purple needlegrass, and California fescue. Caterpillars hibernate in nests attached to the base of the host plant, protected by thatch (thick mats of dead grass) until they emerge as adults and fly from May through August.

Though they look more like moths – with fuzzy abdomens, nodes on the ends of their antennae, a unique wing shape, and often drab coloration – skippers (the family Hesperiidae) are diurnal butterflies, meaning they are active in the day, unlike moths which are nocturnal. The Rural Skipper has a wingspan of about 1 inch. They are gold or rust colored with dark wing edges and sometimes have light grey patches in the middle. A California endemic, this butterfly is found in chaparral, streamside, grassland, and open woodland habitats and lays eggs in grasslands where larvae eat various species of melicgrass and oniongrass. Adults produce one brood per year, fly from May through June, and have been known to favor the nectar of buckwheat flowers.

The Acmon Blue butterfly, which is common in California, can easily be mistaken for the exceedingly rare and endangered Smith’s Blue Butterfly (and unless you plan to spend hours studying them through a pair of binoculars, you likely won’t be able to distinguish them – even butterfly experts struggle with it). The top of a male Acmon Blue’s wings are blue with a dark border while females are brown. The underside of the wings are pale with black spots along the margin and red-orange spots on the hindwing. Like the Smith’s Blue, the Acmon Blue’s wingspan is about 1 inch and the species favors buckwheat throughout its life cycle. The female will also lay single eggs on the leavers or flowers of various other host plants including species of lupine, lotus, and milkvetch. About 75% of gossamer-winged butterflies (the Lycaenidae family) have a relationship with ants. In the Acmon Blue’s case, it is a mutualistic relationship, meaning both species benefit. The ants protect the butterfly’s larvae in exchange for the sweet “honeydew” the larvae secrete from what’s called a dorsal nectary gland. There are many broods from March through October (compared to Smith’s Blue, which emerge for just 2 weeks each June).

The Echo Azure butterfly has a wingspan of about 1 inch and is pale blue with small black spots or dashes on the underwing. As there are many species of small blue butterflies, they are best distinguished by the lack of tail or red-orange markings. Females lay eggs on the flower buds of host plants including Ceanothus, California buckeye, and blackberry, and larvae feed on the buds. Like other gossamer-winged butterflies, it is believed that Echo Azure caterpillars pupate in ant nests. In California, where high elevation and freezing temperatures don’t limit breeding, adults produce a series of generations from February to October and feed on larval host plants including toyon, cascara, and pussypaws.

Please note, this is not an exhaustive list of the common butterflies you may encounter on The Preserve. For more information about and reference photos of these species and many more, check out butterfliesandmoths.org.  To practice your butterfly identification skills in the field, we recommend this Monterey County-specific butterfly field guide. If you’re interested in cultivating a butterfly garden, we recommend consulting Calscape.