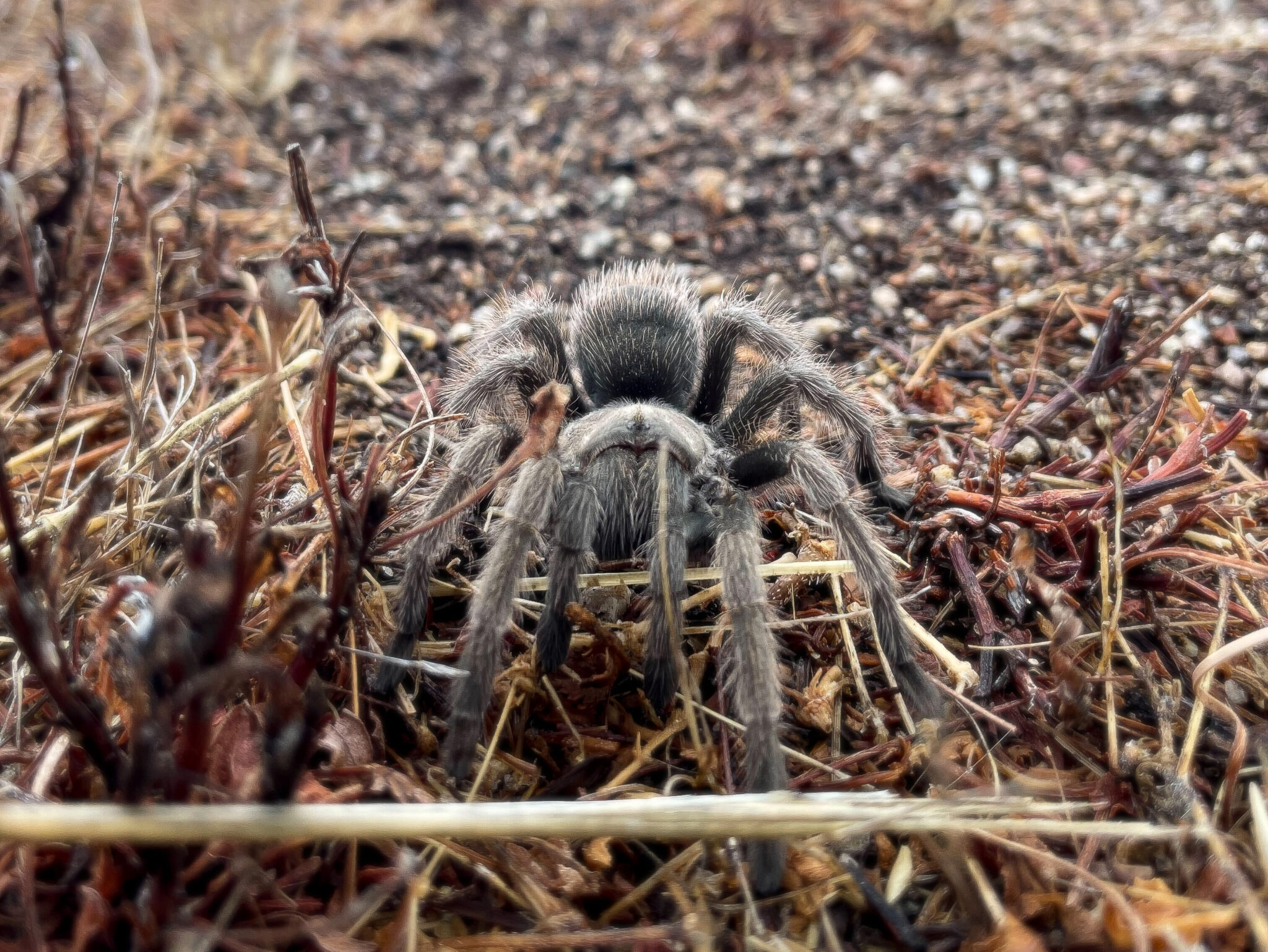 A tarantula looking for love on a foggy morning at the top of Cantera Run. Photo by Jackson Brooke.

Humans tend to find fuzzy creatures “cute.” Why, then, do tarantulas have such a bad reputation? A common belief is that arachnophobia is a lingering survival instinct, developed early in human evolution when many spider species posed a fatal threat. Psychological studies have tested this evolutionary hypothesis by putting young children in a room with spiders and other critters to see how they interact, or by conducting photo reaction experiments. By and large, researchers find that arachnophobia is a learned fear, passed down socially from parents and other trusted adults in early childhood. Of course, movies like Arachnophobia and Harry Potter and the Chamber of Secrets don’t help.

So, can tarantulas hurt you? It’s extremely unlikely. While they can grow to be the size of your hand, tarantula species in California are docile creatures. They are slow-moving, nocturnal homebodies with poor hearing and eyesight that spend most of their lives in underground burrows waiting for insects and other small prey to trigger their silken trip wires. When threatened, a tarantula will raise its front legs to show its fangs and shoot tiny “urticating” hairs from its legs and abdomen that stick to and irritate the skin, creating a short-lived, itchy red rash similar to hives. However, you’d have to get within a few inches of one for that to happen.

“There isn’t any record anywhere of someone dying from a tarantula bite,” Colorado State University Entomologist Maia Holmes said on The Audit Podcast. “They’re absolutely lethal if you’re a cricket or a cockroach or any of their prey.” While tarantulas have venom, it is not toxic to humans and is primarily injected as a digestive enzyme to help the spider break down its food for consumption.

Whether you find tarantulas fascinating or horrifying, you’re more likely to find them crawling around right now than any other time of year, as sexually mature males between the ages of eight and 10 years old are emerging now through October in search of love. Following the scent of female pheromones, they are able to track down the lair of a potential mate.

To begin the courtship ritual, the male strums rhythmically on the thin strands of web at the entrance of a female’s burrow – essentially knocking on her door. If the female wishes to mate, she will drum a beat with her legs and emerge. If not, she will either stay in her burrow or come out to devour the much smaller male. While female tarantulas can live over 25 years, males tend to live about seven or eight years and typically die within a year of mating.

The mating pair stands face-to-face with forelegs raised while the male strokes her in a rhythm thought to relax the female’s fangs and reduce the likelihood of being bitten. Once she’s in a trance-like state, he completes the act by inserting sperm-laden “pedipalps,” smaller leg-like appendages near the mouth, into the female.

The female can hold onto the viable sperm for months, laying between 50 and 2,000 eggs when environmental conditions are favorable. The number of eggs depends on the species, size, and age of the tarantula, and after reaching maturity at four or five years old, she can mate once per year. She carefully wraps the eggs in a silk case and guards it in her burrow, rolling and rotating it every few hours. After a few months, the baby tarantulas hatch from their eggs within the egg sac and the mother opens a hole in the silk for the spiderlings to emerge, about the size of a #2 pencil eraser. The spiderlings leave their mother’s burrow after a few weeks to go off and dig their own. Young tarantulas grow rapidly and must “molt” or shed their hard exoskeleton by secreting a fluid that loosens the shell. They can molt monthly in their first year, but it slows down to about once per year later in life.

Thanks to plate tectonics, tarantulas are found on every continent except Antarctica, with over 1,000 species described worldwide. Originating over 100 million years ago on the supercontinent Gondwana in what is now the Americas, tarantulas spread across the earth as tectonic plates divided and collided to create the land masses we’re familiar with today. Their incredible longevity and ability to adapt to new environments should, at the very least, earn our respect if not our adoration.

There are many tarantula species in California and according to Arachnologist at Auburn University Chris Hamilton, the species we likely observe on The Preserve is the desert tarantula (Aphonopelma Iodius). That said, even experts have a hard time identifying tarantulas. “They’re all so primitive that the distinctions between the species are minor,” said Rick Vetter, a retired entomologist with the University of California Agriculture and Natural Resources Division.

Hamilton deals with this issue at length in a taxonomic study of tarantulas in North America, writing, “the taxonomy of Aphonopelma is beset with poorly delimited species boundaries and very few specimens can be confidently identified using published keys or comparisons to original descriptions.”

As you’re driving around The Preserve this fall, be careful to avoid hitting tarantulas crossing the road – they’re just looking for a mate. For questions about wildlife on The Preserve, please contact Conservation Ecologist Dr. Brian Woodward at bwoodward@slconservancy.org.