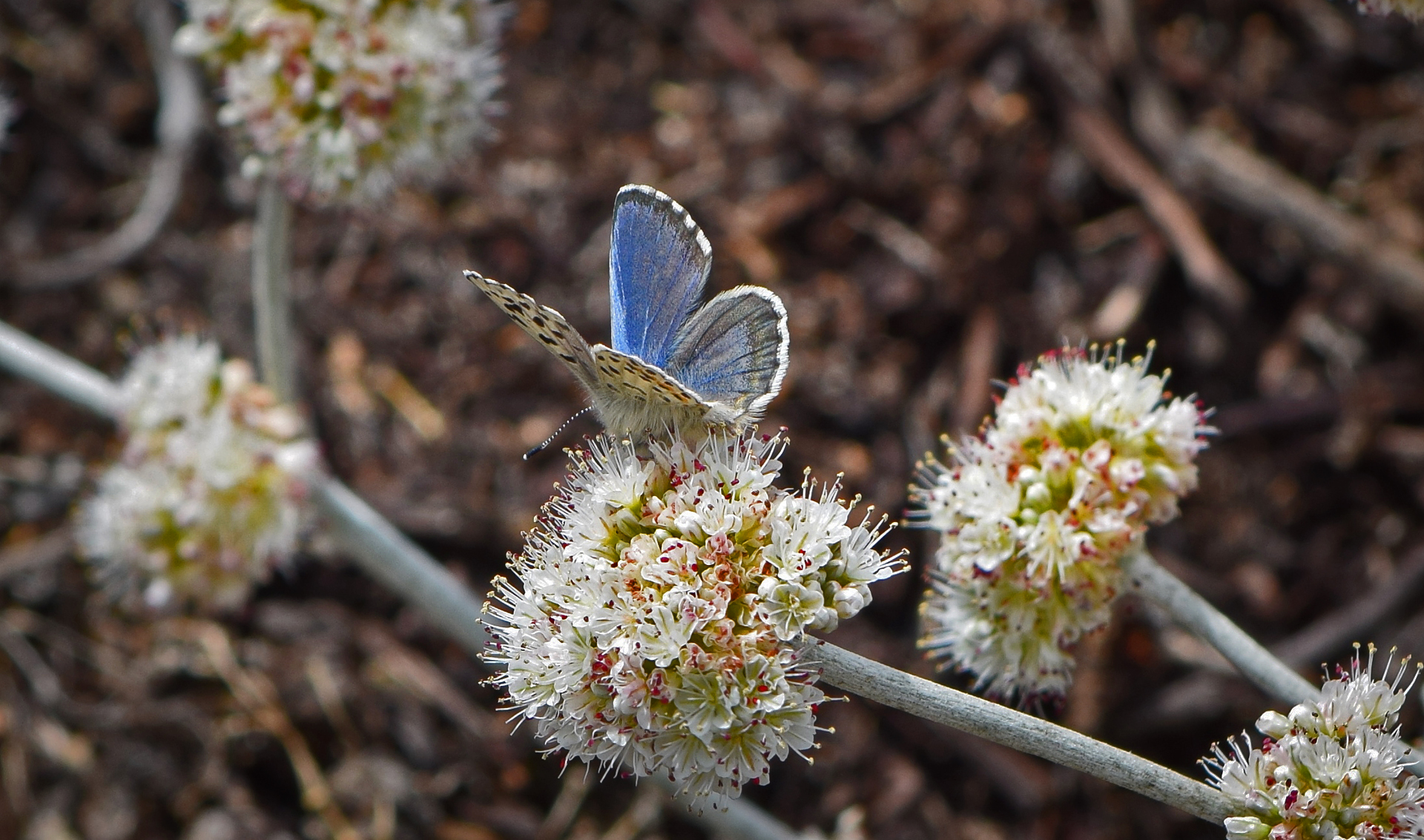 If you see Conservancy staff staring at the ground with binoculars on Peñon Peak, it’s not because we don’t know where the birds are, but because we are trying to identify the Smith’s Blue Butterfly (Euphilotes enoptes smithi), a tiny butterfly with a wingspan of approximately one inch.

The Smith’s Blue Butterfly is a federally endangered sub-species that only exists near the coasts of Monterey County and northern San Luis Obispo County. Males are bright blue on the upper sides of their wings, and females are brown colored with a band of orange marks on the hind wings (Fig. 1). Both males and females have a black checkered edge on their front wings, which is one of the main characteristics to distinguish them from the non-threatened Acmon Blue Butterfly (Icaricia acmon).

About the Smith’s Blue Butterfly

The adult butterflies emerge from their cocoons when the buckwheat starts blooming between May and June. Individual adults live for approximately one week and spend most of their time looking for mates, feeding, and basking on the flower heads. They lay their eggs on newly opened flower heads and the larvae feed on these flowers. Once they pupate, they drop into the leaf litter and sand at the base of the buckwheat plants and overwinter for approximately eight months until they emerge as adults the following summer.

Each year since 2017, The Conservancy has monitored Smith’s Blue Butterflies at several locations of The Preserve, allowing us to estimate the population. This year, thanks to a grant from US Fish and Wildlife Service, we concentrated our efforts on the protection and recovery of buckwheat on The Preserve, knowing that improving critical habitat for this species is going to be the best option to guard against its extinction.

The last time The Conservancy surveyed buckwheat on The Santa Lucia Preserve was almost 20 years ago. Since then, fires have burned and invasive weeds have established, which may have changed the distribution and health of buckwheat. This is why one of the first steps for planning the recovery of the Smith’s Blue Butterfly at The Preserve was to update the buckwheat distribution map and identify potential threats and management actions that could promote its conservation. We also established a series of permanent monitoring plots to link changes in buckwheat amount and health with changes in Smith’s Blue Butterfly populations

To achieve this, I revisited all seacliff buckwheat patches previously located in past surveys, mapped their extent, and identified their threats. This involved hundreds of miles of hiking in the most inaccessible parts of The Preserve, cutting through vegetation using chainsaws, loppers, and machetes to reach the buckwheat patches, and encountering rattlesnakes and protective coyote moms.

Seacliff buckwheat currently covers 118 acres on the 20,000-acre Santa Lucia Preserve. We identified six priority conservation areas (Fig. 4): Animas (62 acres of Seacliff buckwheat), Cantera (31 acres), The Fingers (4 acres), Hall’s Ridge (5 acres), Peñon Peak (6 acres), and Trappers Loop (4 acres). Together, these sites contain 95% of the buckwheat in the Santa Lucia Preserve, so we know that if we protect them, we are securing the vast majority of the Smith’s Blue Butterfly’s habitat on the property.

This information is not only relevant for The Conservancy, but for protecting buckwheat throughout the entire Smith’s Blue Butterfly range as well. Using information from the last survey and other surveys conducted by the US Fish and Wildlife Service, University of California Santa Cruz, and California State Parks, we created a map that predicts where Seacliff buckwheat could exist in Monterey County (Fig. 5). To create this map, we used a powerful tool called “habitat suitability modeling,” (HSM) which uses a combination of statistics and remote sensing to forecast where a species could exist based on past observations and environmental conditions. This is helping us find previously unknown patches of buckwheat throughout the butterfly range and identify potential sites to restore, which could ultimately aid the recovery of Smith’s Blue Butterfly populations.

Threats on The Santa Lucia Preserve

While we found large extensions of buckwheat on The Santa Lucia Preserve, we also found that many of the once-documented patches are now missing. The most common cause of buckwheat loss was French broom (Genista monspessulana) and coyote brush (Baccharis pilularis) encroachment. On the other hand, thatch buildup in the grasslands was probably the main factor preventing buckwheat expansion.

Buckwheat patches not only changed in size but also in quality. An understudied factor affecting buckwheat plants on The Preserve and elsewhere is a process called “senescence,” where branches dry out and may lead to the death of the plant. Buckwheat plants are well adapted for resprouting, so we believe that low levels of controlled disturbance could promote plant growth and prevent senescence. However, this still needs to be tested.

Knowing the location and threats of buckwheat patches on The Santa Lucia Preserve, we designed restoration plans tailored for each priority conservation area. For many sites, this will involve localized weed management such as French broom and coyote brush removal. Other sites may benefit from controlled disturbance, so we are planning to test whether prescribed fire is the right tool to achieve this.

Our latest restoration efforts have been focused on Peñon Peak, a strategic site for butterfly conservation since numerous species of butterflies fly to the hilltops during the mating season to increase their chances of finding a mate. There, we seeded seacliff buckwheat in 45 plots and compared different methods to prepare the soil before seeding (Fig. 6). Seacliff buckwheat is a food plant for many insects, so increasing the number of plants is not only beneficial for Smith’s Blue Butterflies but for dozens of other butterflies as well.

The conservation of a species is no simple task. It requires the combined efforts of scientists, land managers, citizens, and adequate policies. The Santa Lucia Conservancy strives to bridge the gap between these sectors and serve as an example of best practices for land management and conservation in Central California.