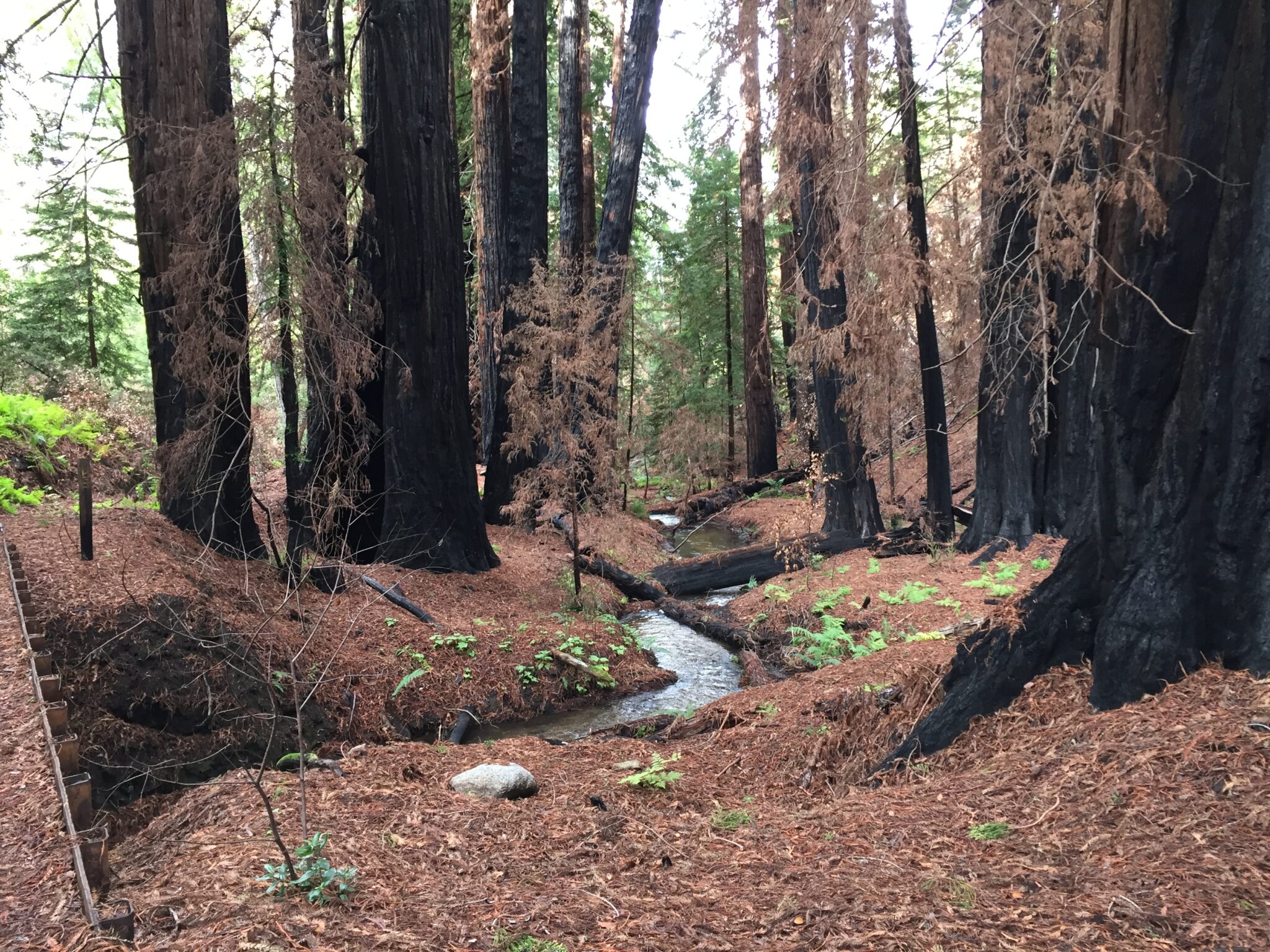 Blackened redwoods stand among a cleared forest floor after the Soberanes Fire in 2016. Photo by Christy Wyckoff.

The Soberanes Fire burned over three months in 2016, starting in Los Padres National Forest and spreading north through Big Sur and into the southwest edge of the Santa Lucia Preserve. On The Preserve, 1,785 acres burned in Williams Canyon and Trapper’s Canyon. The Preserve was a key suppression zone, with 38 miles of suppression lines installed by over 48 CAL FIRE bulldozers.

As the fire approached The Preserve, firefighting personnel implemented a technique known as backfiring throughout Trapper’s Canyon. Firefighters intentionally set fire to consume fuels and create a buffer around protected resources, such as homes and important ecological features, so that the wildfire would not burn as hot or as quickly if it reached the backfire zone. While this method, combined with fuel breaks and active firefighting, was successful in preventing the Soberanes Fire from spreading throughout most of The Preserve, many of our largest coast redwood trees (Sequoia sempervirens) and extensive patches of second growth coast redwood forests burned.

While this ecosystem is adapted to and relies on fire, climate change and a century of fire suppression have created dry conditions and heavy forest fuel loading that can result in wildfire so severe that it is difficult for some forests to recover. When the Soberanes Fire burned 132,127 acres in 2016, it ranked 18th in the top 20 largest wildfires in California’s history. Since then, Soberanes has been bumped off the top 20 list by massive fires in 2020 and 2021.

Burn severities in Trapper’s Canyon ranged from virtually untouched to completely blackened. After six years, the forest has begun to initiate natural recovery. Due to the varied impacts of the fire, however, the plant community is rebounding unevenly throughout the burned area.

A blanket of ash covers the ground of the redwood forest in Williams Canyon after the fire. Photo by Christy Wyckoff.

This month, the Conservancy launched a study to understand how the redwood ecosystem has responded to the Soberanes Fire so that we can use our resources to best maintain this old-growth forest long into the future. Senior Manager of Climate Change Adaptation Jenna Allred, Restoration Manager Jackson Brooke and myself started surveying and inventorying the fire-affected forests of Trapper’s Canyon last week.

We are collecting information on survivorship and mortality of trees of all species, including redwoods, oaks, bays, and madrones. We are also tracking seedlings and saplings to create a detailed report of forest regeneration. This will help us predict the composition of the forest in 10, 20, and even 100 years from now, giving us the data we need to understand which species may need a little help through restoration plantings or seedling cages.

Early results are promising, with seedlings and sprouts of nearly all species present in our research plots. Coast redwood seedlings cover the forest floor in many areas, and most large, old-growth trees survived and have started to sprout new canopies. As we continue to collect data and reconstruct the effects of the Soberanes Fire in Trapper’s Canyon, we look forward to sharing our findings.

If you see us collecting data on your way through the canyon, please stop by and say hello to learn more about this important monitoring and research project! For questions about scientific research on The Preserve, please contact Dr. Brian Woodward at bwoodward@slconservancy.org.