Roads, dams, urban development, and logging operations truncate wildlife habitat. Preserving natural of wildlife corridors, the connective terrestrial and aquatic habitats that act as highways for wildlife, are vital for populations to roam between intact habitats. 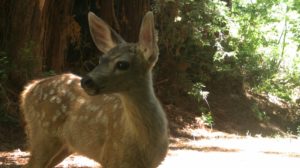 Monterey County, fortunately, retains much of its wild character. Oak woodlands, grasslands, and riparian zones provide habitat for biologically diverse species, and wildlife corridors connect undeveloped natural areas. Dramatic conversion of ranches and woodlands to residential and commercial development throughout Central California reinforces the importance of The Santa Lucia Preserve. The Preserve was carefully designed to maintain permeability to the greatest extent possible.  Permeable design allows wildlife to move organically through The Preserve.  By insisting on environmental ethics in land-use design, The Preserve encourages lasting rapport between homeowners and their natural surroundings, while inflicting minimal impact on wildlife. Conscious development on The Preserve started with scientists who identified sensitive and special ecological and historical resources. The least environmentally sensitive sites were selected for development, such as non-critical wildlife and plant habitat, areas served by an existing network of ranch roads, and areas used as hay fields and cattle pastures.  Careful selection of development sites served to avoid disturbing animal movement.

Reflecting The Preserve’s remarkably diverse habitat, many wildlife species adapted to be edge-dependent, or to live at the border of two distinct habitats and require both.  Barn owls, for instance, nest in woodlands that border grassy fields, where they can hunt. This dualistic complexity encouraged the Conservancy’s commitment to conserve as much of the The Preserve’s overall mosaic as possible.  Adding to this complexity is the fact that, as opposed to human preference to establish fixed roads, the pathways wildlife use are far more transient. Pathways are continually affected by vegetation patterns, interactions between predator and prey, seasonal resources such as forage and water, and by human impact like our permanent roads.

In a major conservation victory, the 2004 acquisition of Palo Corona Regional Park not only preserved an appreciably sized and ecologically potent landscape, but also served to connect nine existing conservation areas including Santa Lucia Conservancy lands. Green corridors now preserved in perpetuity allow species access from The Preserve through several California State Parks, other ecological preserves, and the Ventana Wilderness, which is in turn connected to National Forests through Big Sur.