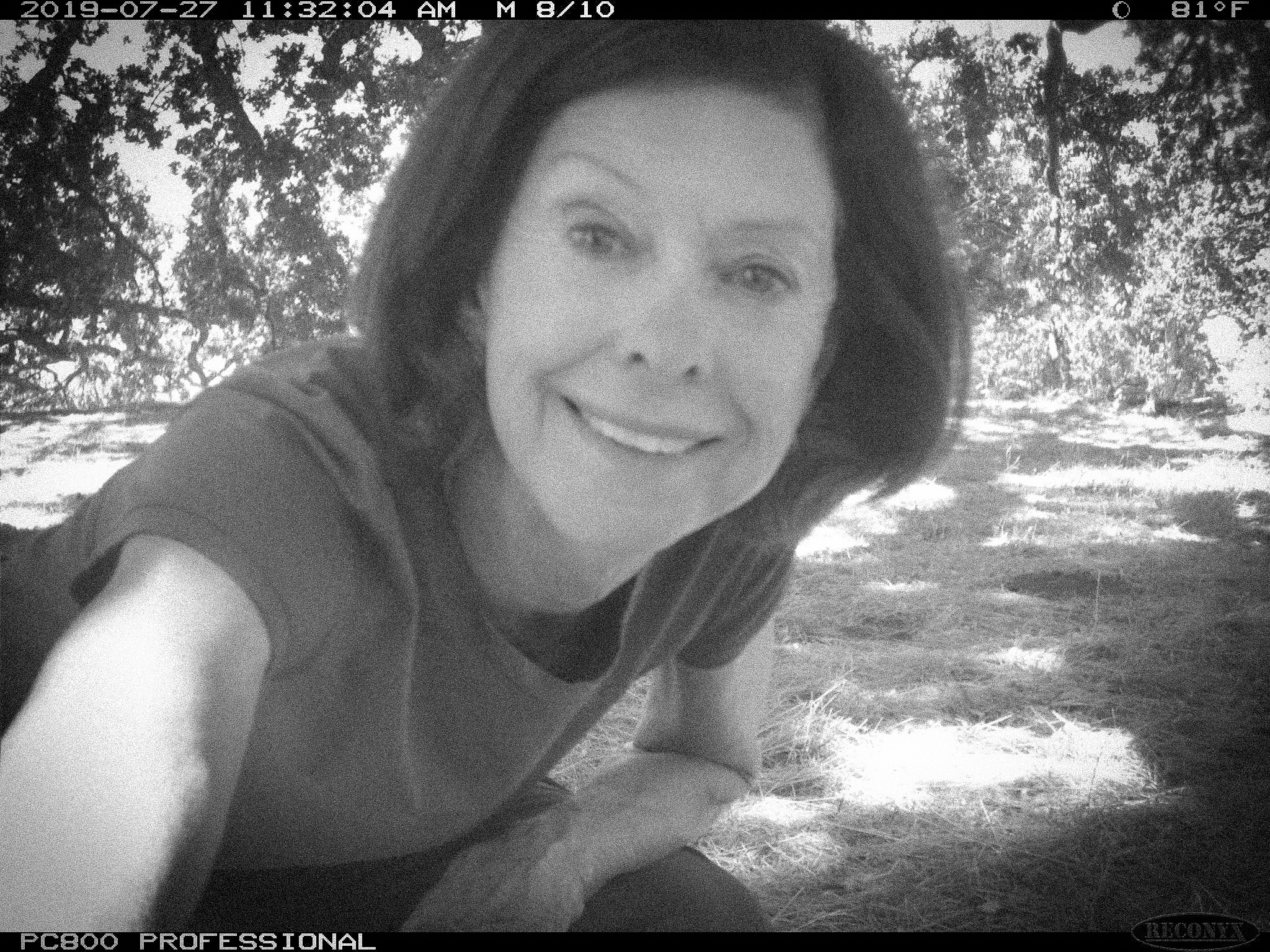 Did you know that nearly half of the special resources on The Preserve reside in the protective hands of our landowners? One of the brilliant, and yet often uncelebrated, design elements of The Preserve is the fact that each landowner is a vested partner in protecting the things we care about such as majestic views, coastal prairies, streams, ponds, archeological sites and exceptional wildlife habitat.

“Exceptional wildlife habitat” might not be how most Preserve landowners previously described their properties but the introduction of wildlife cameras in the Openlands changed all that. It all started in the fall of 2014 with a Citizen Science project in which Preserve members, like Ramona Bohlander pictured above, partnered with the Conservancy to document wildlife that used their Openlands compared to the surrounding Wildlands. 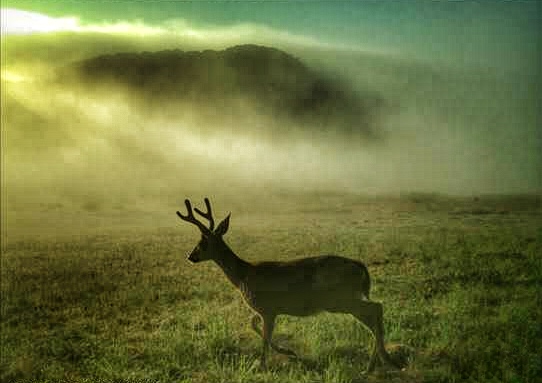 Prior to the launch of the project it was no secret that The Preserve was home to an incredible diversity of wildlife including the iconic mountain lion, beloved bobcat, bouncing deer, strutting turkey and shy grey fox. However, seeing these species from inside your vehicle as you drive along Rancho San Carlos in the evening is different than catching a glimpse of them in your garden while they hunt your gophers at 2 a.m. The placement of cameras, just steps away from back patios, suddenly lifted the veil on the unguarded moments of our wildlife sleeping, lounging and wandering the land. Landowners suddenly owned more than acreage and spectacular views, they owned important wildlife habitat and corridors. 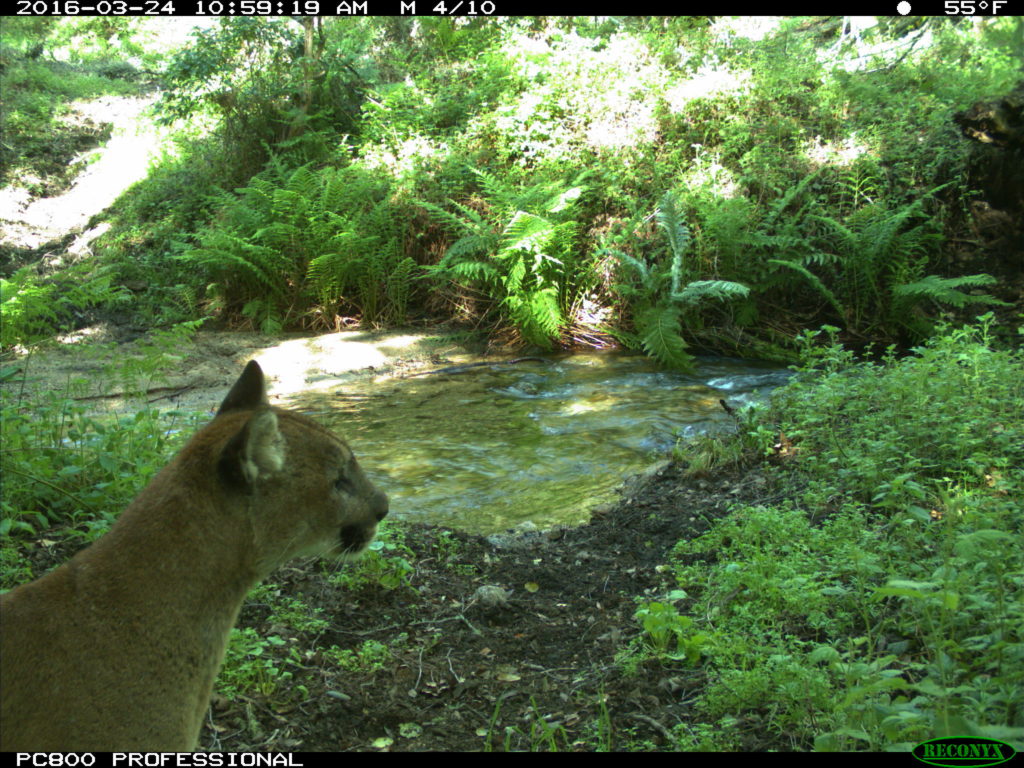 The inspiration for the Where the Wildlife Wander project was not just helping owners learn about their backyard wildlife but to “test the model of The Preserve”. We wondered if wildlife would use the Openlands just like they use the Wildlands. We also wondered if the same collection of species would show up in Openlands as in Wildlands. As data poured in from the cameras spread across the larger Preserve landscape it quickly became apparent that the design was working. Even with homes integrated into their habitat, wildlife continued to use the Openlands and Wildlands in similar ways, reflecting the seamless flow of the land from Homeland to Openland to Wildland. 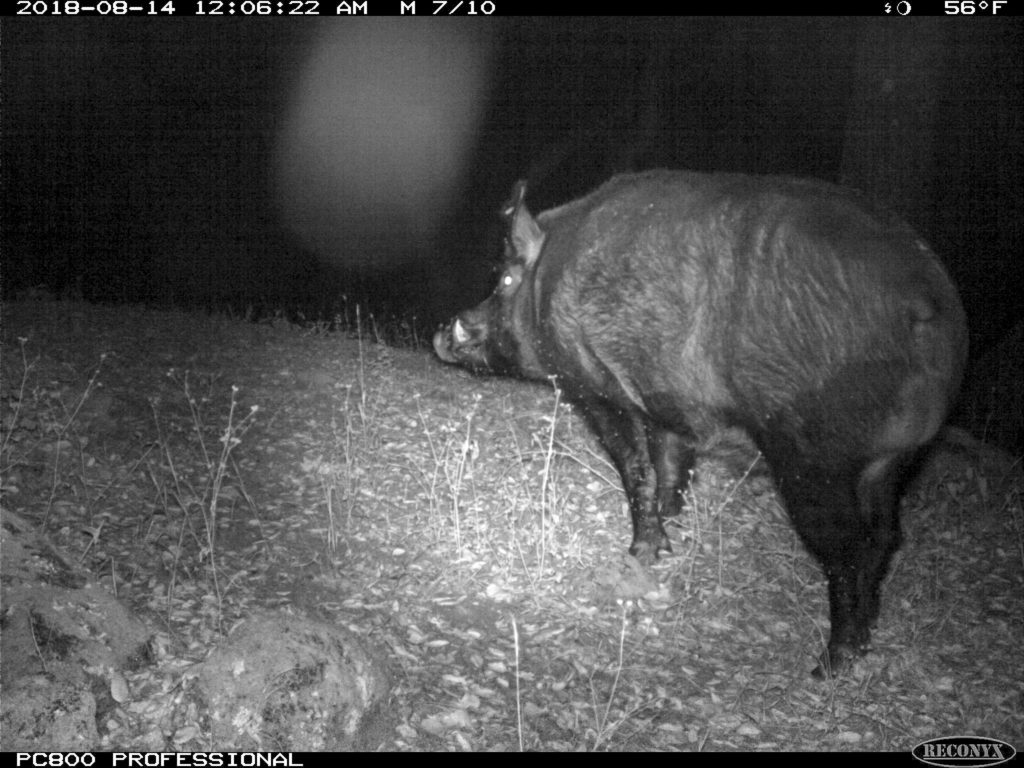 The confirmation of wildlife continuing to use the entire Preserve regardless of structures is a huge indicator of success for the thoughtful design of The Preserve. But the sudden connection, insight and pride experienced by the landowners was the greatest achievement of the project. These Preserve members were now Exceptional Wildlife Habitat Owners, a designation that anyone should be proud to brag about. 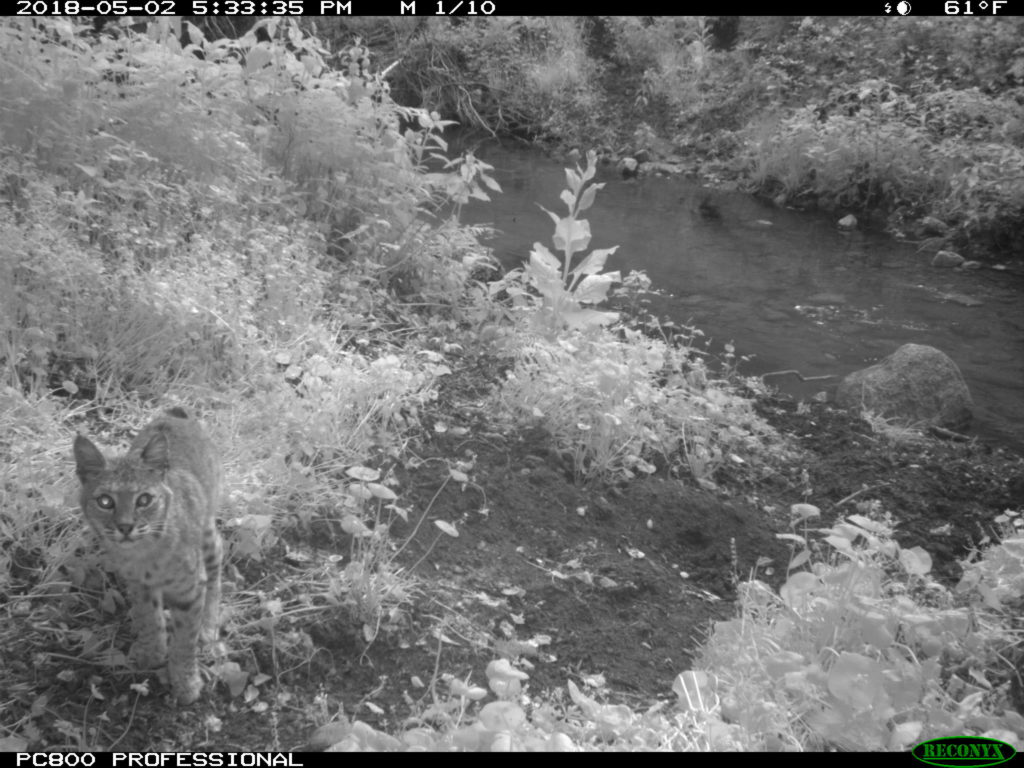 As the community continues to grow, and more homes fill in the neighborhoods, we look forward to the moments when members discover the land they live on is more than a sanctuary for them, it is a sanctuary for our wildlife as well. Just the way The Preserve was designed to work. 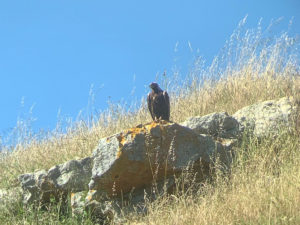 Our team was elated to spot an adult and juvenile golden eagle at Peñon Peak. The majestic bird is one of the largest raptors found in North America, flying up to 200 miles per hour and taking down large prey including deer, goats, cats, rabbits and other mammals. There are just two pairs of eagles known to nest on The Preserve, making this youngster rather special. 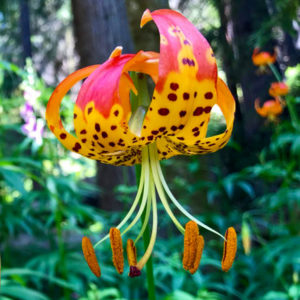 Leopard lilies (Lilium paradalinum ssp. Paradalinum) are out in force in William’s Canyon. This splendid looking wildflower is only out for a few short weeks in the summer, but they sure make the most of it! The native species is a perennial and enjoys having its “feet wet” so most often you will find it along streams in partly shaded forests. Let us know where you encounter these beauties! 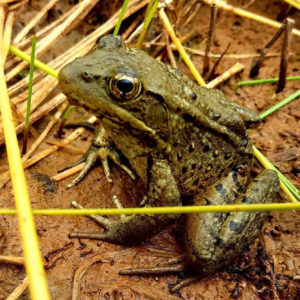 It’s dispersal season for our young amphibians. This means young frogs, like this red-legged frog, and salamanders will depart the pond they were born in this past spring to find a cool spot for the rest of the summer. They are looking for burrows, holes and deep cracks that will shelter them from the drying sun and hungry predators. 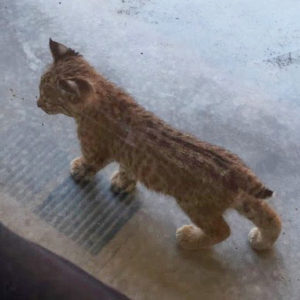 We had a recent report of a couple bobcat kittens passing through a member’s garden on The Preserve. These cats are named for their tails which appear to be cut or “bobbed”.  They are generally solitary animals, but mothers have litters of up to six kittens. These kittens will probably stay with mom until they are nearly a year old. Not only are they an indication of a thriving ecosystem, but they will also play an important role in predating rodents. Thank you for sharing this exciting news and image with us Dee Dee! 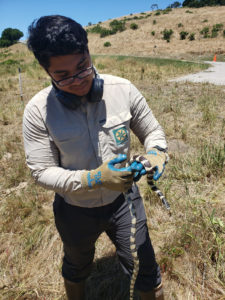 King snakes help put members of our seasonal field crew at ease, especially when mowing and not able to hear rattlesnakes rattle. Did you know that king snakes eat rattlesnakes and are immune to their venom? Let us know if you see any of these magnificent reptiles on The Preserve. 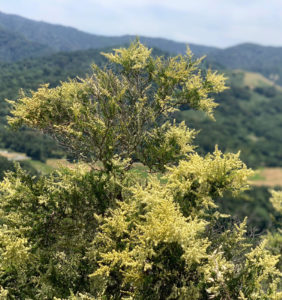 The chamise was in full bloom this spring! From one ridge to the next we saw this otherwise nondescript dark green plant sporting a lovely creamy white blanket of delicate flowers. The term “chamissal” refers to thickets of chamise, giving name to Chamisal Ridge. This species is an important part of the chaparral ecosystem providing food to pollinators and habitat for small mammals, birds and reptiles. This plant was traditionally used to make a salve to treat skin conditions like eczema. Though it is known for burning hot in wildfires, it is also one of the first species to grow back after a fire, quickly stabilizing the soils and preventing erosion and slope failures – a much needed ecosystem service post-fire. 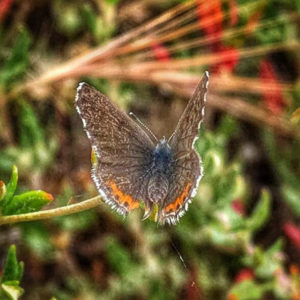 A female Smith’s blue butterfly was recently spotted on The Preserve. It’s mind boggling to think that she would have just seven days to locate one very special plant, find a mate and lay eggs! What’s more, she could only do any of that when it was warm enough, and the whole time she would have had to avoid predators. 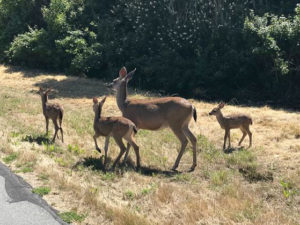 We saw a baby boom on The Preserve at the end of spring. This trio crossing the road with mom is a good reminder to take caution when driving, as well as when hiking, as newborn fawns stay hidden in the grass for the first several days of their lives. 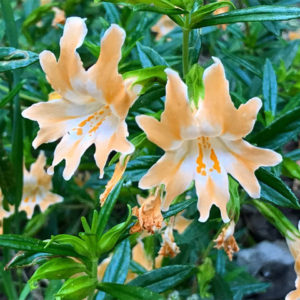 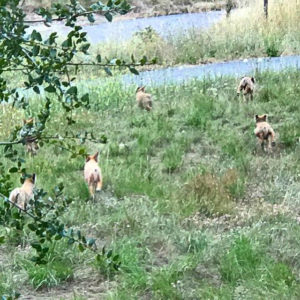 Six little coyote tails bounding through the grasslands is quite the morning sight! One of our members recently shared this photo of smaller members of our local coyote family. Seeing our wildlife raise families on The Preserve is additional evidence of the conservation model success! Earlier this year, a section of Robinson Canyon trail was closed to avoid interactions with denning coyotes. The temporary closure allowed the family to raise their new pups in a safe environment without feeling threatened. Thank you again for your cooperation and patience over the six-week closure. Coyotes are an important part of this ecosystem, not least because they are avid rodent hunters. Thank you for sharing the photo with us Sue Walters! 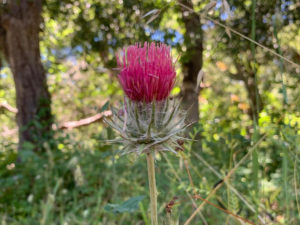 This is the native cobweb thistle, named for the delicate white hairs wrapped around below the base of the flower. This understated native flower, sports a range of colors from white to lavender to light pink and fuchsia. It seems to like wet winters and is showing up in new spots around the Flats, on Chamisal Pass and at the top of Hall’s Ridge. Our community’s hard work tackling invasive non-native species of thistle have allowed this local beauty to thrive, which in turn supports a much healthier ecosystem and an enhanced Preserve landscape. 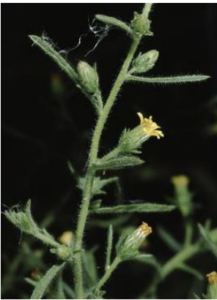 Stinkwort is an an annual shrub-like weed relatively new to California and is on the attack on The Preserve! The woody weed has a conical shape about 3 feet tall when mature. Help the Conservancy take this Zero Tolerance Species down. Use your Weed Field Guide to identify stinkwort and report any findings to the Conservancy. For more information, check out our Weed Management Guidelines. Use caution when managing this weed and wear gloves as it can cause skin rashes!

CONTINUE TO READ THE AUGUST NEWSLETTER