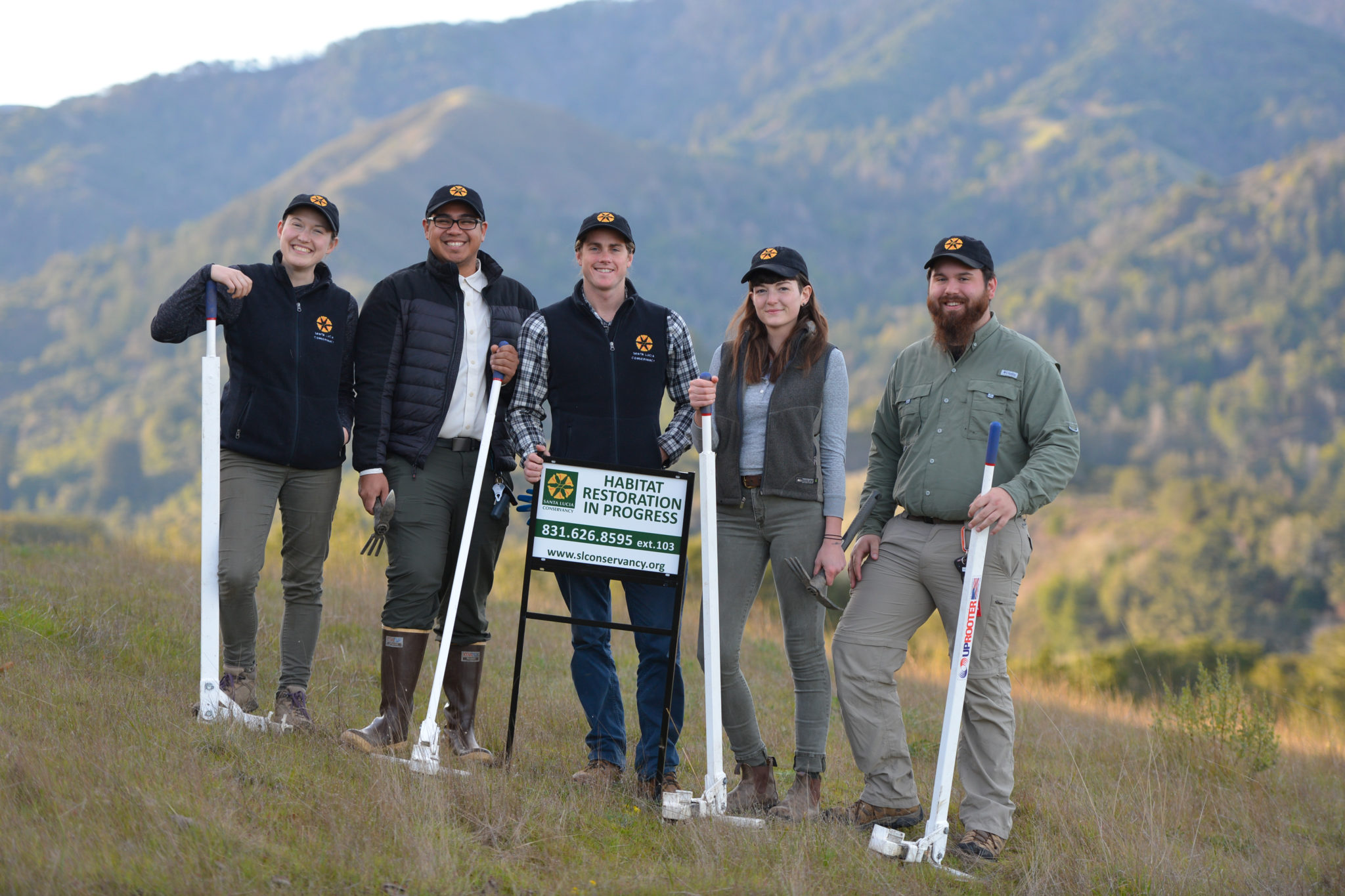 Day in and day out, the Conservancy’s Field Crew returned to the office in a state of happy lethargy; simultaneously pleased with the day’s accomplishments and exhausted by long days in the field. Pictured left to right above: Brett, Isidro, Austin, Ryen and Chris.

Before I joined the Conservancy’s inaugural Field Crew, I could not have identified French broom out of a lineup. I did not know mugwort works better than Tecnu as first aid in the field to mitigate poison oak. I did not know how severely California’s grasslands are endangered, nor that, with 20% native species, The Preserve hosts some of the healthiest remaining grasslands in the state. And I didn’t how what it would feel like to translate “habitat restoration” from trim words on a screen (neat GIS polygons) into work that left permanent dirt under my fingernails.

My four teammates have their own lessons learned, but these are mine.

Our task was eradicating invasive species – non-native plants that outcompete and kill native plants – from prioritized grasslands.  In this, we had two major obstacles.

The first was the species themselves. It turns out there are visceral reasons that some plants become successful invaders. French broom, for example, grows a root the size of a sweet potato, sprouting long tendrils with a decided proclivity to tunnel directly into hillsides, all of which must be expunged to kill the plant. Milk thistle debuts with beguiling wave-like patterns on its leaves, then grows into a five-foot adult with a prolific seed system encapsulated in maces that can and absolutely will stab anyone attempting to behead them. On top of this, we met these and other species of ill repute on their own territory. I am a Marine, and I say without a shadow of hesitation the first three weeks of hauling a steel weed wench over the Preserve’s hillsides had me stronger than any training regime any platoon leader cooked up.

The second challenge was the scale and scope of our project. The stands of weeds seemed so vast and a day’s dirty, sweaty work seemed to push back only so much. I care deeply about wild lands; only the opportunity to work with a Conservancy whose work I highly respect pulled me out of my summer habitat more or less living in federally protected wildernesses. In a time of melting glaciers and struggling biodiversity, did executing poison hemlock that seemed only to spring back really help? Because I believe in a polycentric, everyone-do-what-you-can approach to conservation, I say yes. I constantly had to remind myself we were the inaugural team of a five-year project, itself enveloped in a larger conservation Grasslands Initiative, itself only a subset of the Conservancy’s efforts to preserve a beautiful landscape across 18,000 acres of open and wild lands.

With these sizable obstacles, physical and mental, it was therefore fortunate that my Field Crew teammates were awesome.

Our team herpetology enthusiast reached into grasses, bringing up snakes and lizards, and expounded on their unique qualities. He taught me about California king snakes – we like them! They eat rattlesnakes and western fence lizards – we really like them, as ticks that bite them lose Lyme bacteria they might be carrying.  Another good-natured teammate, we sometimes called “the other chainsaw”, for his ability to all but literally tackle the most gnarly French broom the rest of us had written off as too big to pull by hand. Our resident herbalist vitalized the landscape with unique insight, venerating edible and medicinal plants. It was because of her knowledge that I spent the season quite cheerfully drinking tea made of plants foraged in the field. Our sole native teammate was an easy-to-work-with, laid back surfer dude, belying a stunning work ethic that made him a scourge on the invasive plants of The Preserve.

It would be hyperbolic to say we felt triumphant. We knew the uphill nature of our battle with invasives would need to be repeated and expanded, but we felt moments of relief. Few things felt better than finishing a site that seemed infinite. Over several weeks we successfully took on a stand of French broom so robust we dubbed it “The Fortress”.  Few texts have given me as much professional pleasure as reporting, “The Fortress has fallen.”

For me, the best moments were the quiet ones. Rainbows over redwoods after riding out storms that left us muddy but undeterred. Four bucks strolling by in the still-cool morning, curious and unafraid. Bobcats darting into the trees. Lunch in the shade of live oaks, observing the colorful panoply of spring wildflowers.

The most specific pleasure was looking at what had been a gnarled carpet of Italian thistle under the Enchanted Forest’s valley oaks before our crew’s ministrations and seeing space and light filtering in to support oak saplings.  The idea that because of us, new life might have a chance to claim their native birthright.

My teammates have their own moments of quiet victory, but that one was mine.