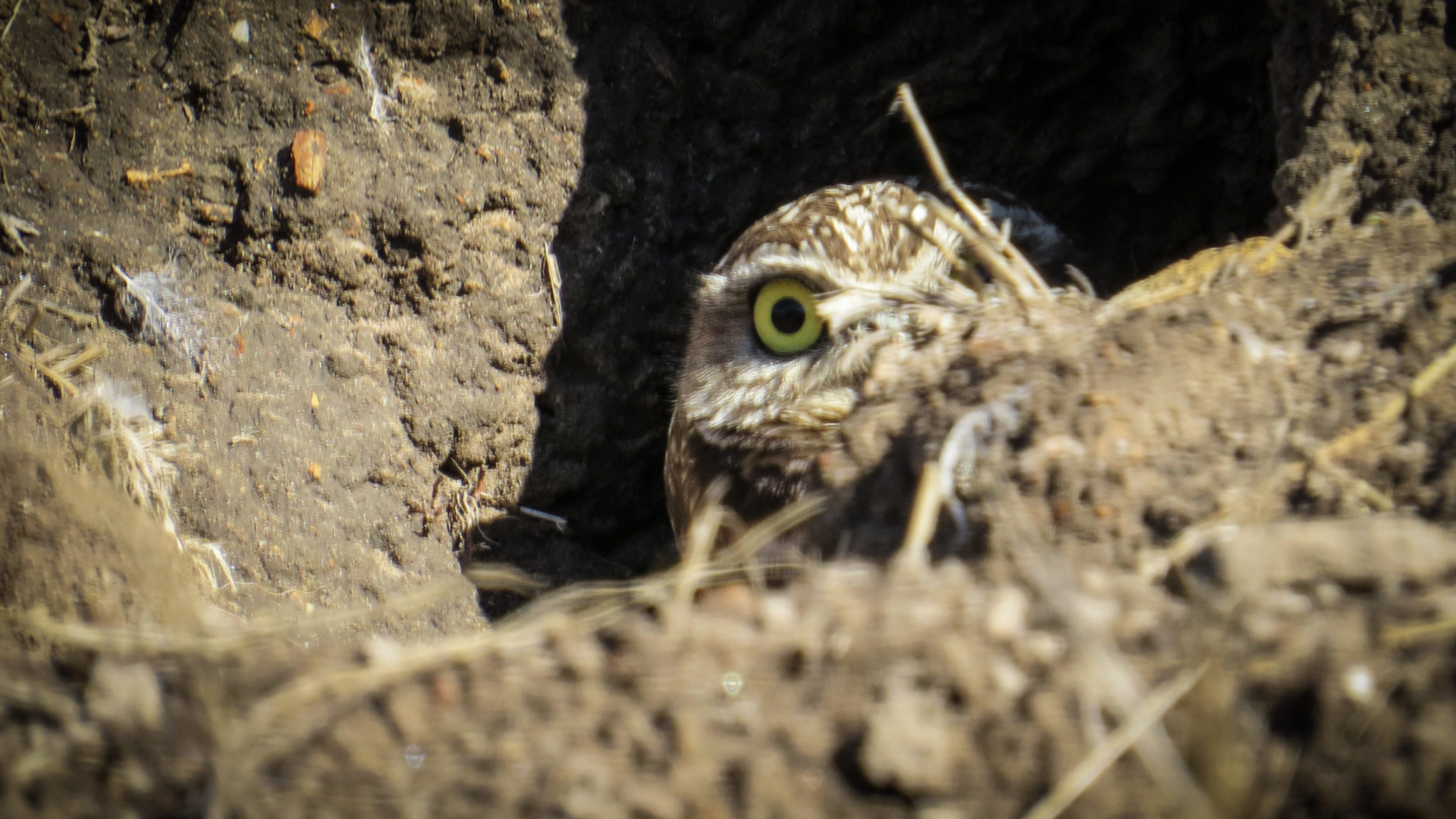 Nature’s Engineers and the Return of the Burrowing Owl

The California ground squirrel is a wonderous and critically important component of a healthy grassland. You may not think of them as nature’s engineers, and may even have some other choice names for them! But, in fact, they are essential ecosystem engineers that increase water infiltration into the ground, improve soil health and build habitat for hundreds of other species. One of the species that is dependent on ground squirrels is the burrowing owl, a small brown and white barred owl seen standing out in the grassland on unusually long legs.

The burrowing owl’s name might lend you to think they are industrious little birds that excavate their own burrows. In reality they are more of the Airbnb type patrons, preferring instead to seasonally ‘borrow’ burrows from other species like the ground squirrel. Ground squirrels seem to tolerate the intrusion by relinquishing that section of their labryinth until the owls move on in the spring, although some of our wildlife cameras suggest the ground squirrel does still check in on its burrow, despite some serious side eye from the occupying owl.

Burrowing owls were historically known to use The Preserve as habitat over the winter but had been missing for about ten years until we observed one on Peñon in 2015. Much like our tiger salamanders, the burrowing owls started showing up again after we had grazed and opened up the grasslands for our local wildlife. Now, each winter, we keep an eye out for burrowing owls on Peñon and the Mesa. We hope to see more around The Preserve as the Grasslands Initiative builds momentum and the conservation grazing program expands. Let us know if you see any around! Unlike most owls, burrowing owls are active during the day, have legs that are nearly as long as their body, eyebrow feathers that will make you think they are scolding you, and hang out in areas where there are ground squirrels or other cavities in the ground. You can tell an owl has been using a burrow or hole because white guano splatters surround the entrance and there may be very tiny owl pellets nearby too. Sometimes they will even decorate the entrance to their burrow with shiny bobbles to mark it as their home. That is until they head out in the spring and relinquish the burrow to its rightful owner, the humble but essential ground squirrel. 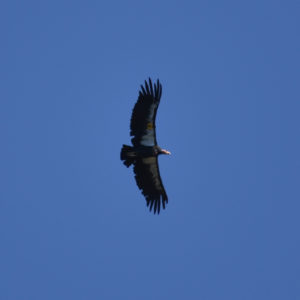 CONDORS
It is no mystery that Peñon Peak is notorious for spectacular bird watching. Offering virtually 360-degree views, you never know what you might see. Our Conservation Grazing Technician, Dayna, was shocked when she spotted something much larger in size, gliding through the air. The two raptors had wingspans that appeared as long as the Conservancy’s truck. According to our partners at the Ventana Wildlife Society, GPS data on September 17 tracked two California condors skirting within a mile of Peñon on their way to Carmel Valley, just four days prior to Dayna’s possible sighting. The last confirmed condor sighting on The Preserve was in 2014. With only about 40% of the critically endangered species bearing GPS tags, it is possible that these majestic birds graced us with their presence once again. 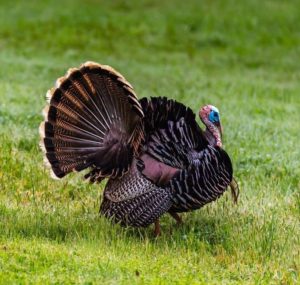 WILD TURKEYS
The wild turkeys on The Preserve are not actually native. The last turkeys native to California were alive during the last ice age, about 10,000 years ago. The turkeys you see today are descended from birds introduced to California from Mexico and Texas at the start of the last century by the California Fish and Game Commission. There are five sub-species of turkey in North America, mainly found east of the Rockies, those on The Preserve are likely to be Rio Grande Turkeys. Photo © Serena Lasko 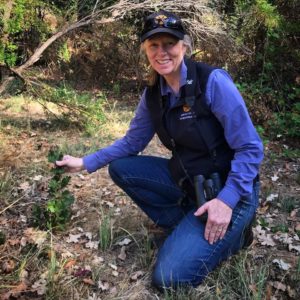 VALLEY OAKS
One of the most exciting things happening on The Preserve right now is the return of sapling Valley Oaks. This only happens once every 250 – 300 years, and some scientists weren’t sure we’d ever see this happen again due to climate change. According to the California Oak Foundation, 90% of Valley Oak forests were destroyed by the early 1900s, largely due to the Central Valley’s conversion from wildlands to row crops and orchards. Fire suppression and non-native species have also threatened these trees’ life cycles. It’s a rare and valuable gift to see these little trees giving it a shot. Valley Oaks are the largest oak species and live only in California. They can live to be 600 years old. Here’s hoping some of these little baby trees make it to more than half a millennia. 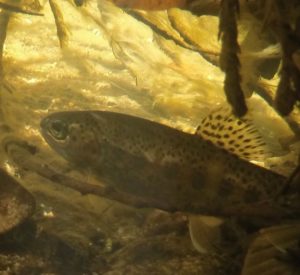 STEELHEAD TROUT
Steelhead are resilient critters. Unlike other salmonids, steelhead will make the grueling journey from ocean to freshwater multiple times in their lifetime, enriching creeks with ocean nutrients when they come home to spawn. Many of The Preserve’s creeks are spawning habitat for this remarkable steelhead trout. 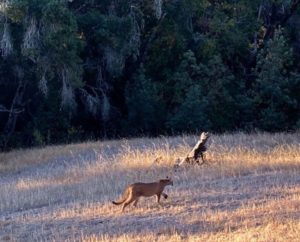 MOUNTAIN LION
The mountain lion is the only large cat in the world whose range is actually expanding. Based on their ability to move so stealthily, they’re sometimes called ghost cats. The Preserve was designed with habitat connectivity in mind, so wild inhabitants can pass through. Edward Abbey wrote, “Wilderness is not a luxury but a necessity of the human spirit… a civilization which destroys what little remains of the wild, the spare, the original, is cutting itself off from its origins.” We’re proud to be part of The Preserve’s grand experiment to home humans and wildlife alike in our intact wild lands. Jeff Earl captured a shot of this beauty. 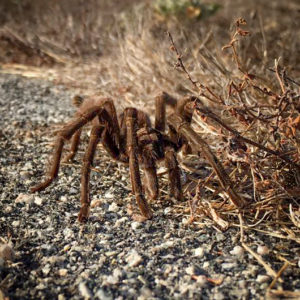 Fall is the season of love for amorous tarantulas, and you may have seen some hairy Romeos strolling along the roadside. This is the only time of the year that these shaggy spiders emerge from their individual burrows. For male tarantulas, it is likely the only time in its entire 5-7 year lifespan that it will depart its burrow! Why do they risk it all out in the great outdoors? Why for a mate of course. They wander about the grasslands looking for the burrow of a female tarantula, where they try to tap out the right beat in hopes the female will accept their courtship. Docile by nature, they mean you no harm and are just out looking for love! 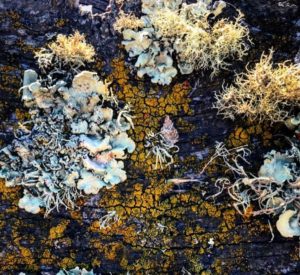 LICHEN
As we move into the darker months, lichen’s vibrant color stands out. Did you know lichen is not a single organism, nor is it a plant? It is the result of a symbiotic relationship between a threadlike fungus and an algae or Cyanobacteria, an alliance between two different organisms from two different kingdoms. Fungus provide shelter, and the photosynthesizing partner (algae) supplies it with food from water and sunlight. Lichen are essential to The Preserve’s ecosystems. They not only feed animals, bird and insects, they also help create and nourish soil. The Preserve’s most visible lichen is lace lichen, which is often confused with Spanish moss. Lace lichen only grows where the air is clean, so take a deep breath and enjoy. 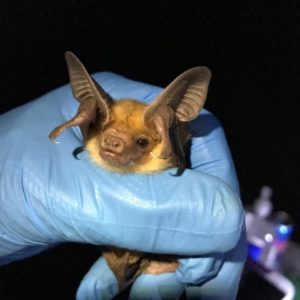 BATS
Bats, like this Pallid bat found on The Preserve, are unsung heroes of Halloween: a study in Indonesia (a major supplier of cocoa beans) reported that bats annually save farmers $800 million by eating bugs that farms would otherwise need to treat with pesticide. So, should you notice one of The Preserve’s bats in the winter sky, thank its kind for helping keep your holiday chocolate affordable! Photo © Bethany Schulze 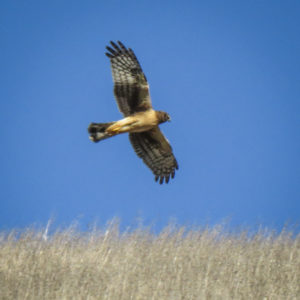 NORTHERN HARRIERS
Once known as a marsh hawk, the Northern harrier is one of eight diurnal (daytime) raptor species that we see regularly on The Preserve. Most commonly seen soaring along the contours of our golden grasslands in the winter, they can be quickly distinguished from other raptors when you see the white on their rump, the long straight tail and the signature low gliding flight as they hunt for small rodents. Unlike most of the local raptor species, Northern harriers are extremely dimorphic, allowing the average admirer to distinguish between females and males. Females are about 30% larger with a chestnut brown back and wings and a buffy belly, while males are smaller with a striking grey blue plumage on their back and wings and a white underside. 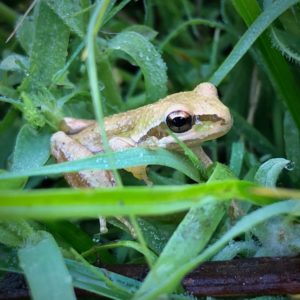 FROGS
Why did the frog cross the road? To get to the pond on the other side. The Preserve’s biota are feeling the green up from our first rains. Now that we have received our first few inches, we expect to see frogs and salamanders on the move. Be careful driving at night as amphibians like Western toads, California red-legged frogs, and California tiger salamanders could cross your path. Photo © Serena Lasko 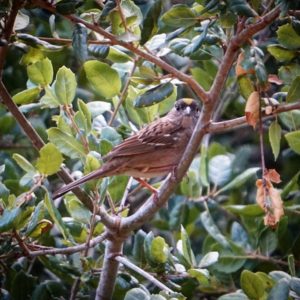 GOLDEN CROWNED SPARROW
There are sights, smells and sounds that epitomize the shift from one season to the next. Locally, we know fall has arrived when we begin hearing the melodic and haunting call of the golden crowned sparrow. Sometimes just a two-note call, high then low. And other times it is a descending four note song that sounds a bit like “su-mmer’s o-ver”. Happy Fall! 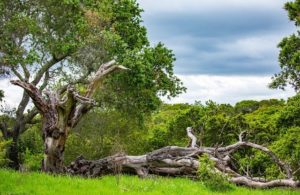 FALLEN TREES
Did you know that downed trees play an important role in the ecosystem? These seemingly dead trees are actually teeming with wildlife. Logs and snags provide a place to nest, rest, eat and grow to hundreds of species of wildlife. Photo © Serena Lasko