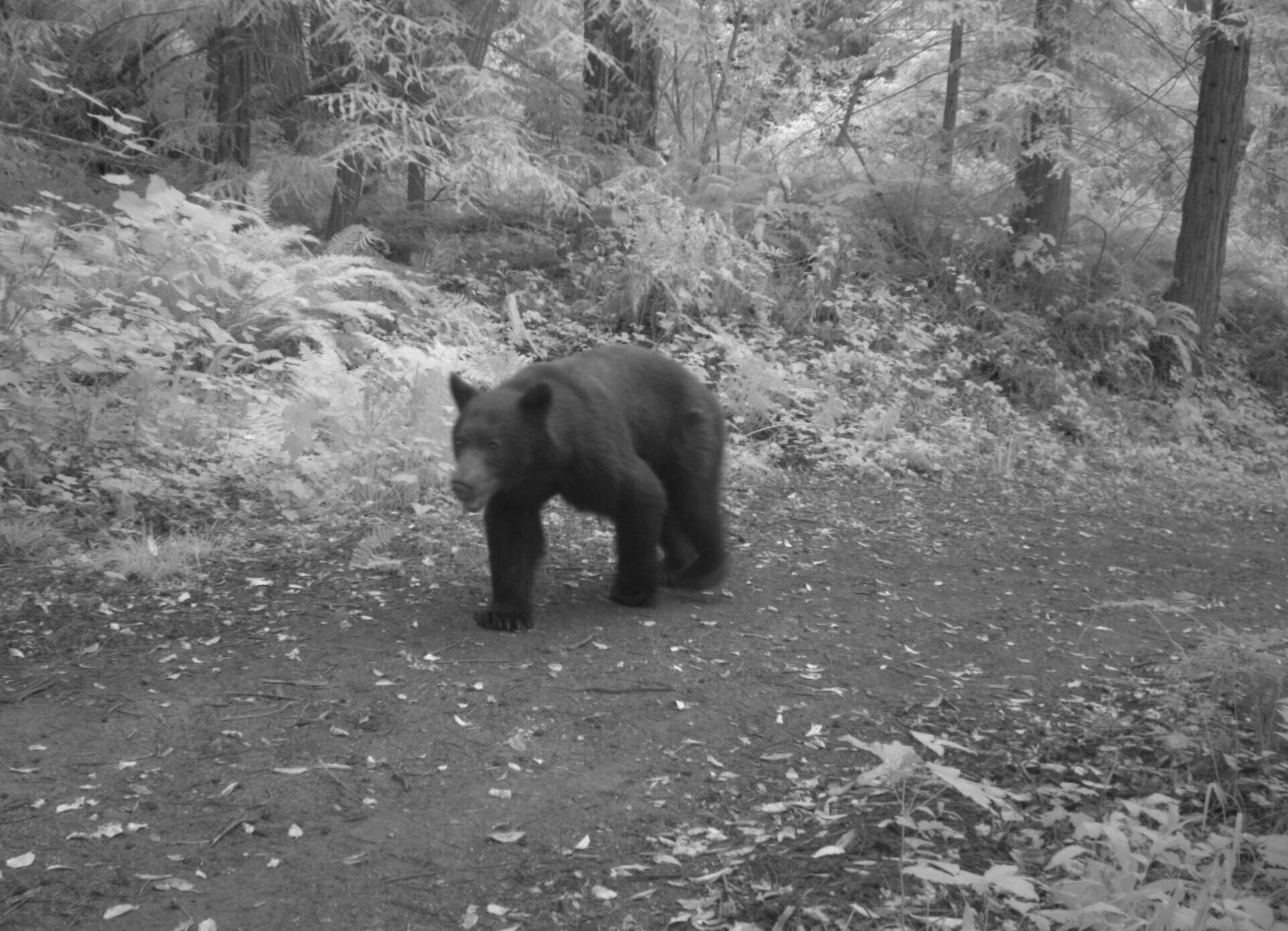 While they are the state animal, California’s track record with bears is grim. When the state became more densely populated during and after the gold rush, conflicts between the California grizzly (Ursus arctos californicus) and settlers increased, and the grizzly population in California was hunted to extinction in 1924.

The smaller and more docile black bear (Ursus americanus) is the only remaining bear species in the state. The California Department of Fish and Wildlife (CDFW) estimates the population is between 30,000 and 40,000 black bears, up from an estimate of between 10,000 and 15,000 bears in 1982.

Despite their name, black bears come in more colors than most other North American mammals. They can be black, brown, cinnamon, blue-grey, or blonde. Sows weigh 100-200 pounds while boars average 150-350 pounds (with the largest, like Hank the Tank, weighing up to 500 pounds). Their presence on The Preserve is observed through our wildlife camera traps, occasional sightings, as well as tracks, scat, claw marks, stripped and broken berry bushes, and long coarse hair embedded in tree bark from scratching their backs.

Mating season for black bears is June through July. Sows usually breed every other year, depending on food abundance and quality, and give birth to a litter of between two and four cubs in February. Bear cubs can weigh less than a pound at birth, growing to an average of six pounds when they leave the den in the spring and begin to explore the world with their mother. Cubs will stay with their mother for up to two years before they establish their independence and find a suitable territory.

In autumn, black bears enter a period called “hyperphagia,” when they undergo physiological changes that force them into consumption overdrive to prepare for winter. Adults can eat over 20,000 calories per day during this time, and in their constant search for food, they may venture closer to their human neighbors. Many black bears do not hibernate in the milder regions of California, as hibernation is an adaptation to a lack of food availability. With the Mediterranean climate in the Central Coast region, winter is not as harsh on the black bear’s diet, but the hyperphagia adaptation is still present.

Due to their omnivorous and voracious diet, black bears serve the ecosystem as seed dispersers, scavengers, and predators. Most commonly found in wooded areas, they subsist on insects, nuts, acorns, berries, grasses, forbs, carrion, small mammals, and fish in the wild. That said, bears are known to be highly opportunistic and will eat nearly anything, including human garbage.

Bears scratch trees, sign posts, and in this case the Hall’s Ridge bathroom to mark their territory. Photo by Katherine Nolan.

Though they tend to have poor eyesight and hearing, bears have a strong sense of smell. The scent of food, including from bird feeders, compost, and improperly stored garbage can attract bears. To keep our wildlife wild and prevent bears from associating people as a source of food, please follow these recommendations:

In the Lake Tahoe Basin, black bear habituation has resulted in a significant increase in bear-human conflicts, with bears breaking into trash cans, homes, and vehicles to find food. Bears are intelligent and highly adaptive, so when they are consistently fed by improperly stored garbage, they learn to find easy meals in human communities and pass that behavior on to their young.

By implementing measures to prevent bears from associating humans with food in the first place, we can impede bears from developing this behavior on The Preserve.

What to do if You Encounter a Bear

Black Bear sightings are not cause for immediate alarm, as they are naturally wary of humans and rarely aggressive. If you encounter a bear, stay calm and follow these steps:

For more information about bears and other wildlife on The Preserve, please contact Conservation Ecologist Dr. Brian Woodward at bwoodward@slconservancy.org.