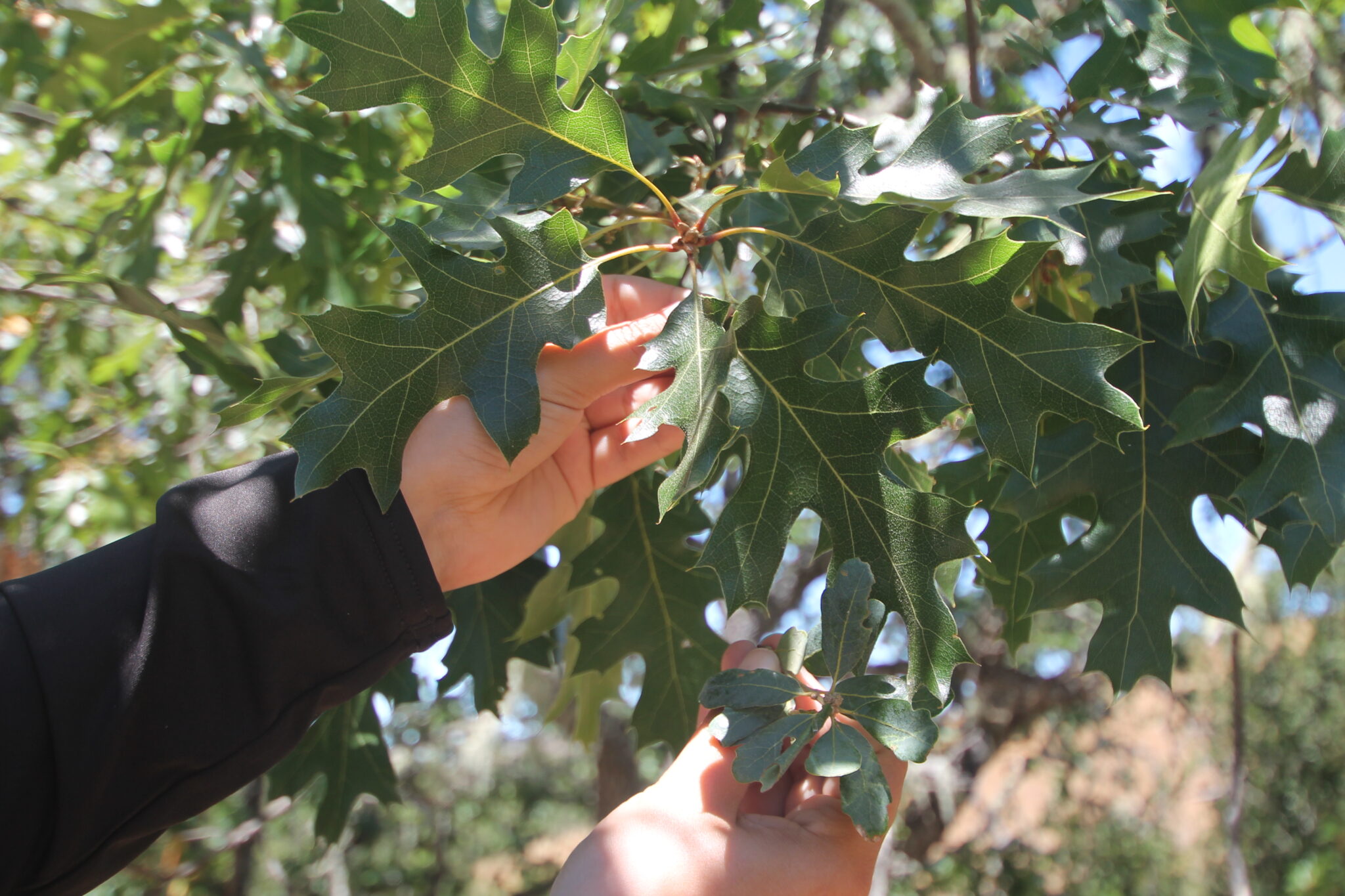 Some of the most dramatic trees on The Preserve are old oaks, which are found sprinkled on grassy hillsides to create brilliant savannas and clustered together in woodlands, providing habitat for many species. Oak trees are especially important to indigenous groups in Monterey County including the Rumsen and Esselen people, who relied on acorns as a staple of their diet.

The oak genus, Quercus, is broken into three subgroups, of which the red oaks and the white oaks have member species present on The Preserve. We have three species from the red oak subgroup: coast live oak, black oak, and Shreve oak as well as two species from the white oak subgroup: valley oak and blue oak. All of these species help make The Preserve landscape as stunning as it is, but each has its own quirks that make it unique. Learn how to identify each of the five species on The Preserve and where to look for them. 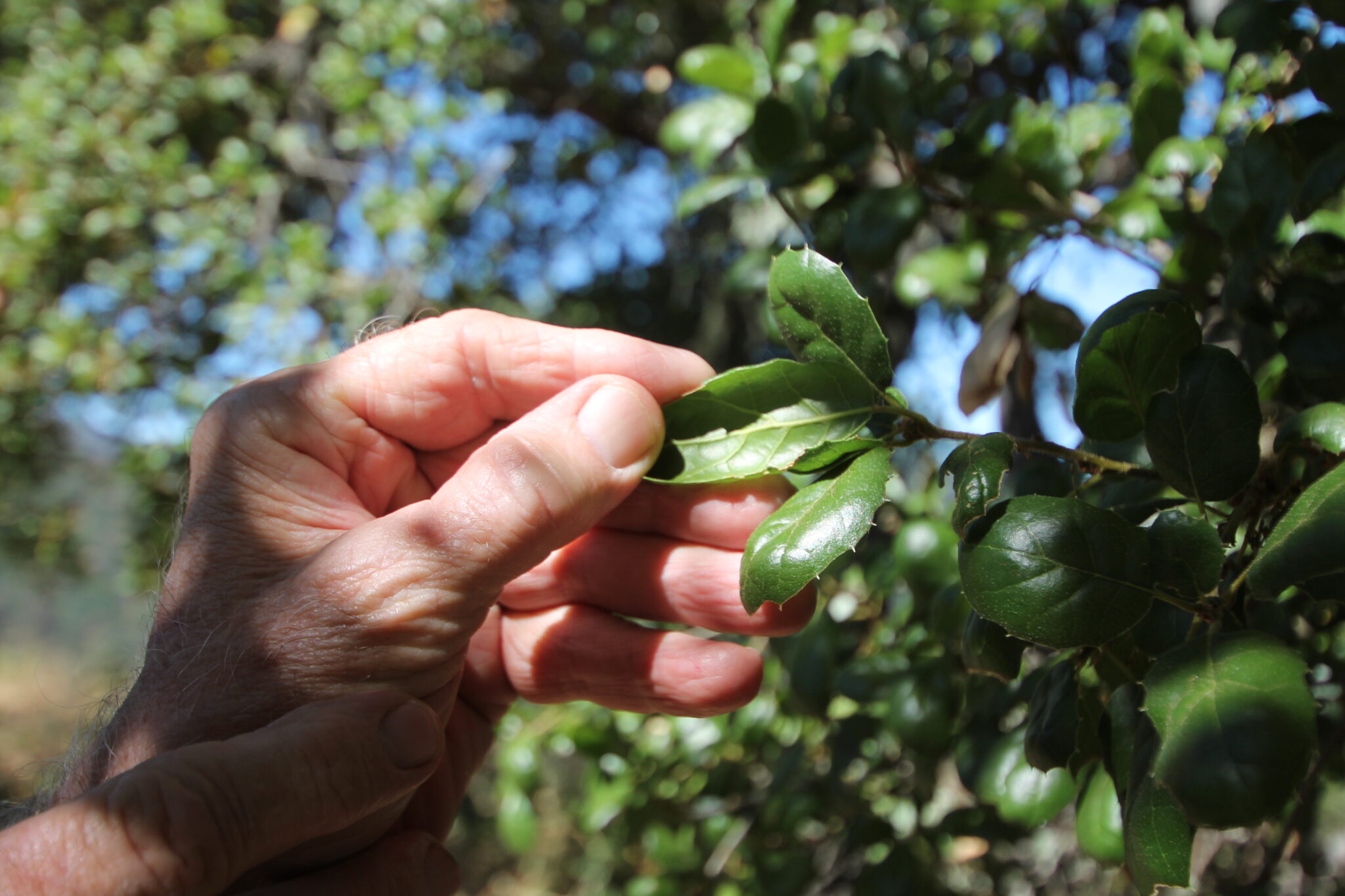 The most widespread oak on The Preserve, the coast live oak is tolerant of a wide range of conditions. You can see them just about anywhere on The Preserve that you find oaks. The bark of young trees resembles an elephant’s skin, grey and fairly smooth but “bunched up” where branches split off of the trunk or limbs, and as the tree gets older, the bark develops furrows. The evergreen leaves are dark green with spiny edges that often roll down to give the leaf a convex shape. On the underside of the leaf, look for the “hairy armpits” or a collection of fine hairs at the intersections of the veins.

Coast live oaks are the only member of the red oak subgroup in California that produces mature acorns in their first year. The acorns are between 1 and 1.5 inches and develop at the tips of the branches during the fall. Young coast live oaks have a somewhat shrubby appearance, growing bunched and low to the ground before growing vertically. This shrubby form early in life allows the tree to protect itself from herbivory as the thick mass of spiny leaves deters deer and other would-be predators. 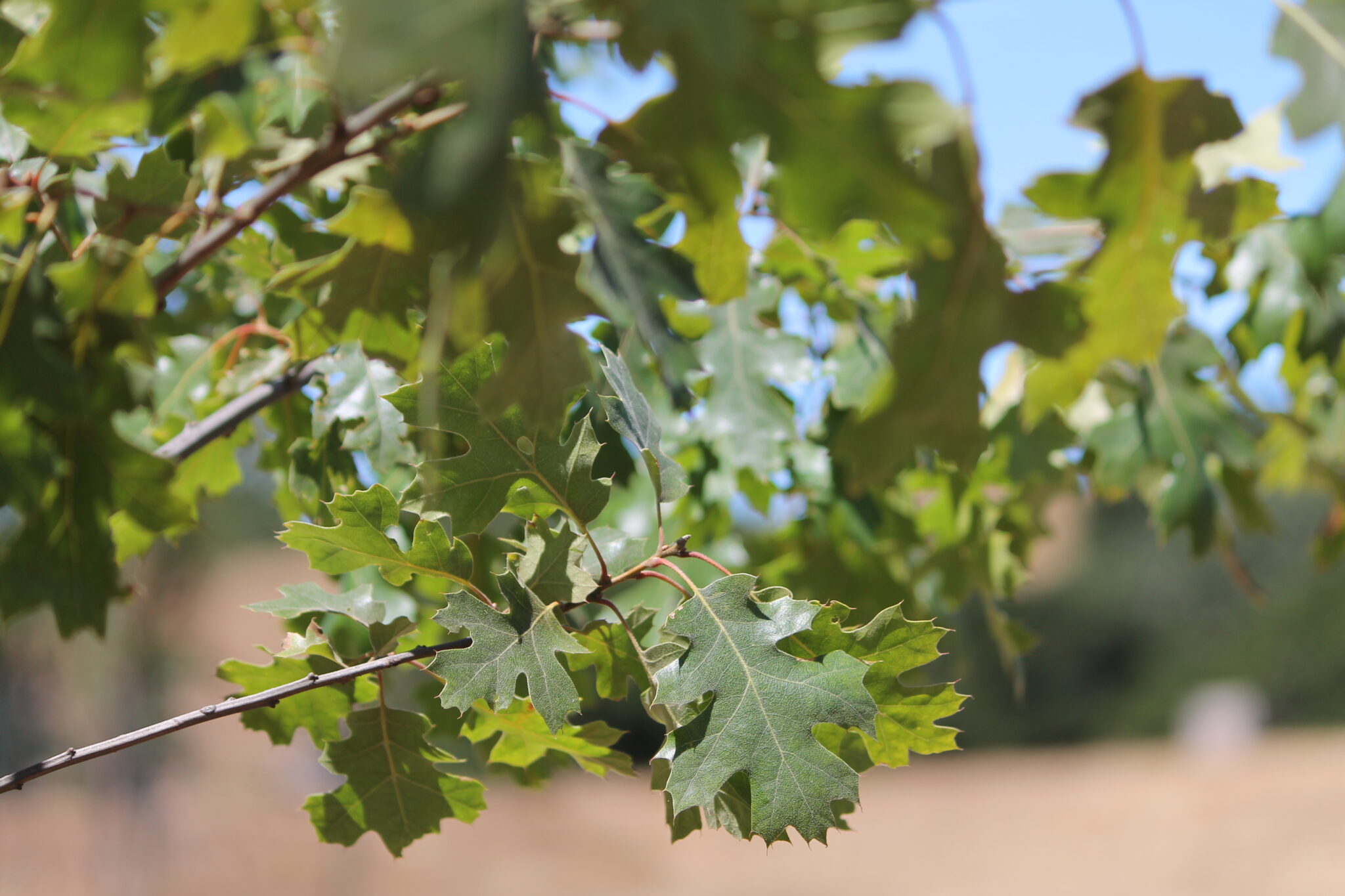 Black oaks have a more limited range on The Preserve than coast live oaks do, but occupy more total area in California than any other oak species. They are found in some of the oak savannas such as spots along Touche Pass and East Vasquez, and are also found mixed in forests, like at the top of Chamisal Pass near Vuela de Las Palomas. They prefer dry and well-drained soils that prevent them from getting their “feet wet,” or having lots of water around their base and roots.

The furrowed bark becomes platy with age and has a dark color that gives this oak its name. Black oak leaves are deciduous, 4-8” long, pointed as is characteristic of the red oak subgenus, and deeply lobed. Black oaks are easy to spot in the late summer and fall as their deciduous leaves start to change color and drop. The acorns are 1-1.2” long and take 2 years to mature, so to find them look at the base of the current year’s growth, several inches in from the tips of the branches. Acorns maturing in one year will be found at the very tips of the branches, at the end of the current year’s growth. Acorns that take two years to mature will be found a few inches back from the tip, at the end of the previous year’s growth, which can be determined by a slight color difference.

Sudden oak death is a problem for black oaks, which are very susceptible to infection, though researchers are still trying to figure out why black oaks are more susceptible than other red oaks. Black oaks are resistant to fire and seedlings and sprouts often grow quickly following a fire, taking advantage of an open canopy. 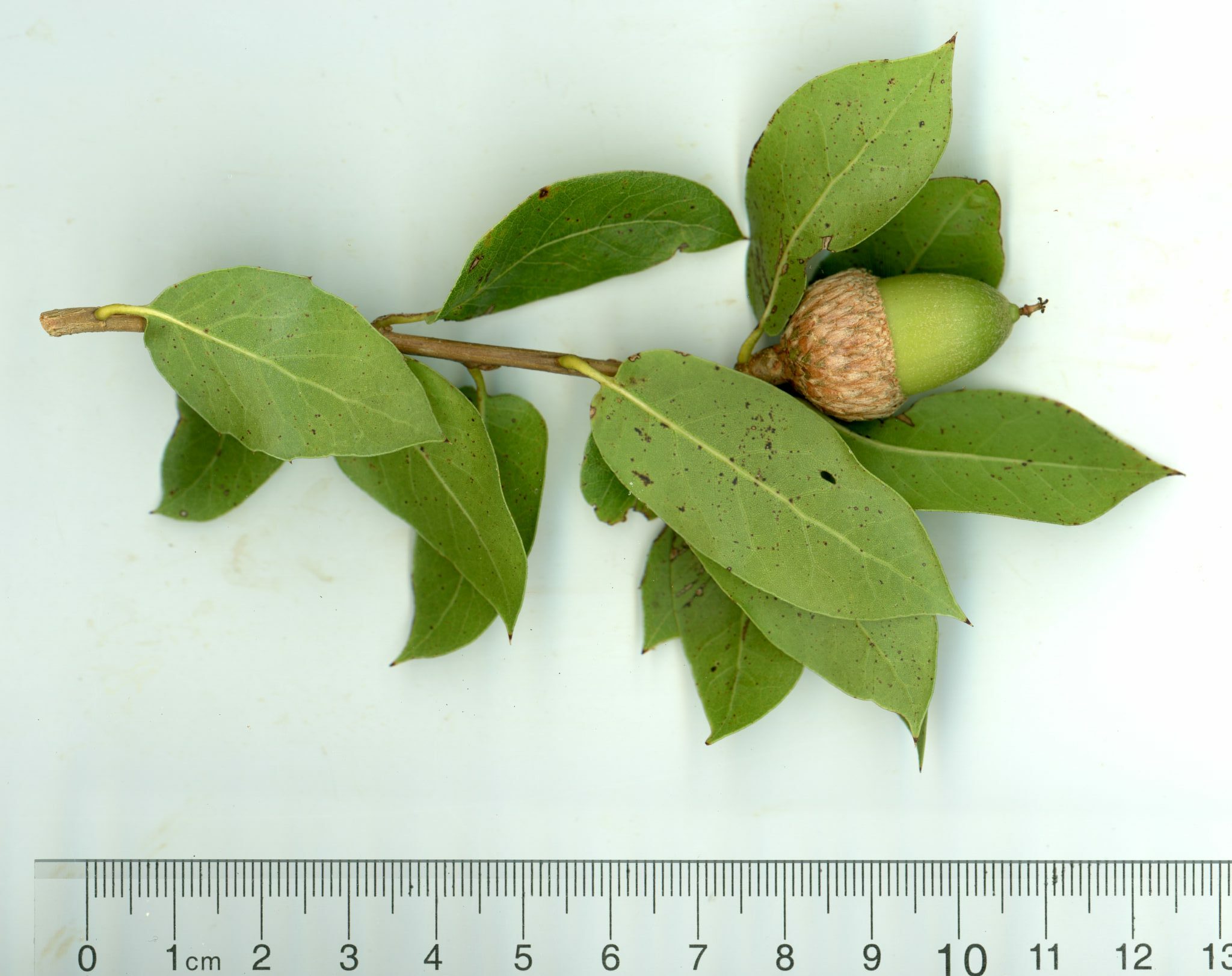 Shreve oak is less common than most of the other species found on The Preserve. An evergreen oak, the edges of its leaves are smooth or have small needle-like spines. It can look similar to coast live oak but these smooth edges and the lack of the “hairy armpits” on the underside of the leaf can help to differentiate it.

Shreve oaks are often found near coast redwoods as both like low elevation valleys in the foothills of the California Coast ranges. On The Preserve, Shreve oaks live along Chamisal Pass in spots above the Robinson Canyon Trail but below Vuelo de las Palomas, within sight of redwoods.

Currently classified as a variation of the Santa Cruz Island oak, recent studies suggest that the Santa Cruz Island oak (Quercus parvula var. parvula) is, rather, a variation of the Shreve oak. Shreve oaks don’t grow as tall as the other oak species on The Preserve, maintaining a more shrubby look throughout their life, though they can grow over 30 feet tall. All members of the red oak subgroup, which includes Shreve oak, are susceptible to Sudden Oak Death. 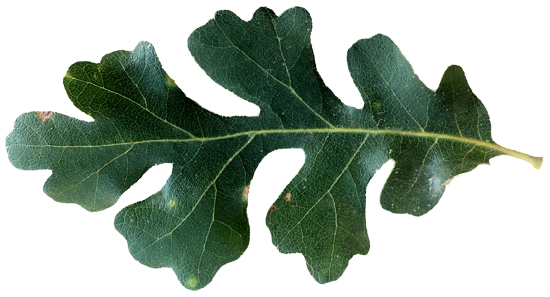 Valley oaks are the largest North American oak and can live to over 500 years old. They prefer rich soils in floodplains and valley floors and, as their name suggests, are seldom found on steep slopes. You can find them in the Enchanted Forest along Rancho San Carlos Road and in the Chicken Flats near the Hacienda. The bark has deep furrows and can develop a platy appearance, similar to the black oak, though valley oak bark is lighter in color. Valley oaks are deciduous and their leaves are rounded, have deep lobes, and are roughly half as wide as they are long. The underside of the leaf is covered in fine, light-colored hairs that make it look white in color. Acorns of the valley oak are 1.2-2” long and slender, covered ½-⅓ of the way down by the cup, and as a member of the white oak subgroup, they mature in one year.

Galls, puffy white or yellow fungus-looking balls that grow on some oaks, are a great way to help narrow down your choices when trying to identify oaks, as they are only found among species in the white oak subgroup. When wasps or other insects lay eggs under the bark, the tree produces a gall to protect its tissue from the pest invasion. When the larvae hatch, they feed on the gall tissue. Oak galls are not unhealthy for the tree and are an example of a plant and animal coevolving.

Oaks in the white oak subgroup, including valley oak, have not been found to be susceptible to Sudden Oak Death. Mature valley oaks are fire resistant, and seedlings are able to resprout following low-intensity fire. Like all oaks, acorns buried by rodents and birds can help with regeneration post-fire. 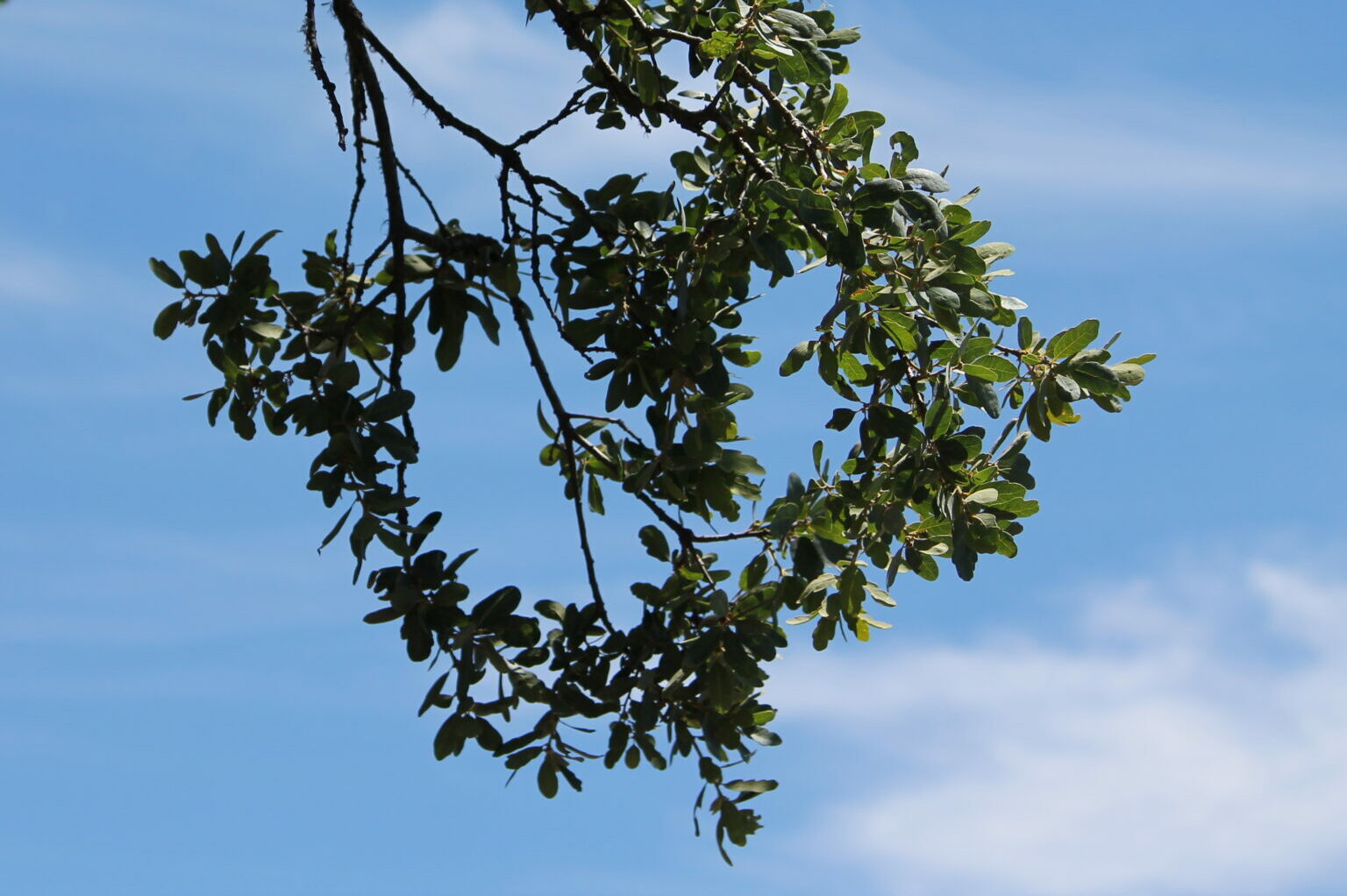 Blue oak is endemic to California (exists only here) and is found on low-elevation slopes primarily in dry areas. This preference for drier sites explains why blue oaks are found further inland than the fog typically reaches, with one individual tree on East Vasquez and Chamisal Pass. Blue oak has thin bark that looks shaggy or flaky which Jenna Allred, Senior Manager of Climate Change Adaptation, describes as looking as though it’s been scratched by a cat. The waxy, deciduous leaves are 1-3” long with few to no lobes on the edges and have a blue-green color that is most apparent when viewed next to a different oak species. The acorns are roughly 1” long, tapering to a point, with the cup covering just the base of the nut. As a member of the white oak subgroup, the acorns mature in 1 year.

Blue oak is a drought tolerant species and will drop its leaves in drought conditions, producing new leaves with sufficient rainfall. The waxy leaves also help with dry conditions as they limit water loss. Like valley oak, blue oak is a member of the white oak subgroup so be sure to look for galls on its leaves and branches.

Blue oak is not susceptible to Sudden Oak Death, but is less resistant to fire than the other oaks on The Preserve. As they get older, blue oaks begin to lose their ability to resprout and their thin bark doesn’t protect them from flames as well  as other species. 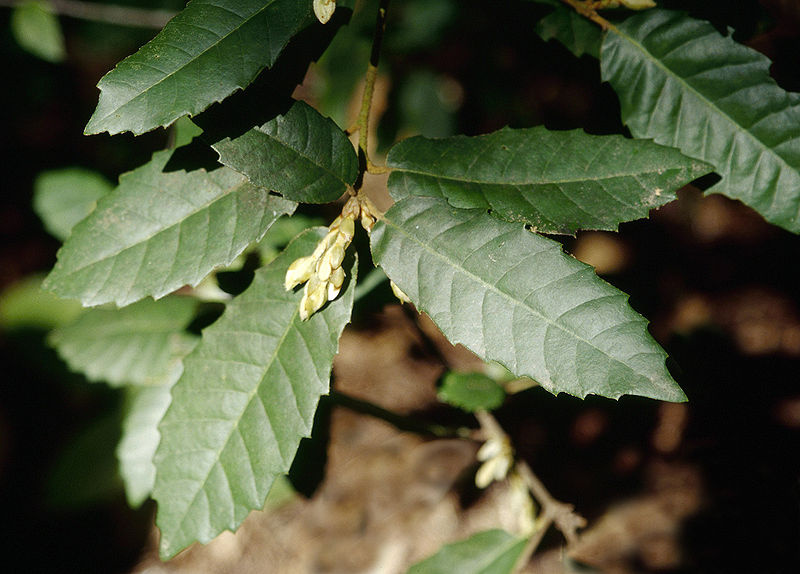 Curious why you didn’t see tanoak on this list? That’s because tanoak, though it produces acorns and is highly susceptible to Sudden Oak Death… isn’t actually an oak! Notholithocarpus densiflorus is a close relative of the North American oaks but isn’t a member of the genus Quercus. Evidence suggests that tanoak’s acorns evolved independently from Quercus acorns.