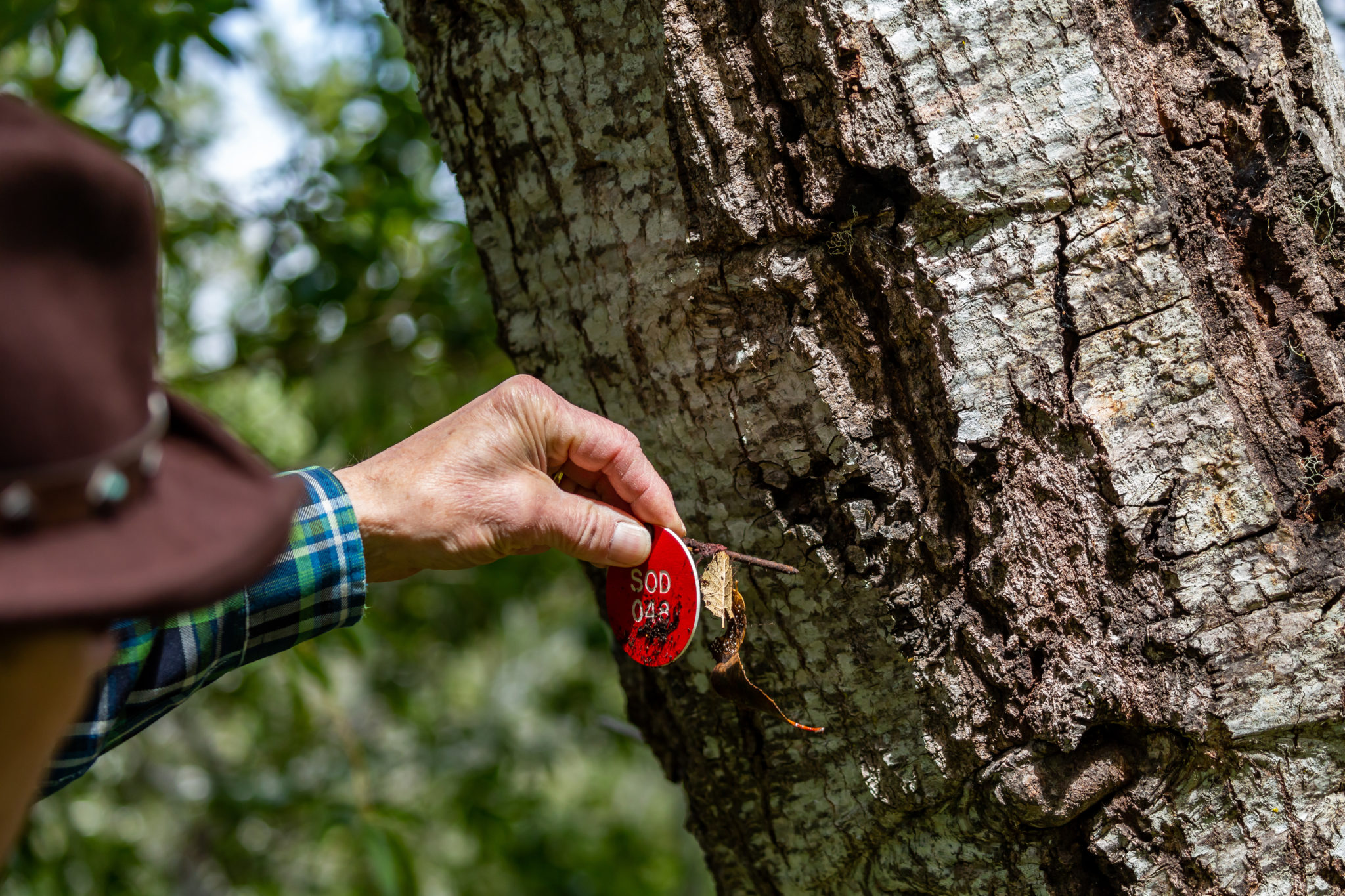 A volunteer pins a sudden oak death (SOD) sampling tag to a tree.

Sudden Oak Death (SOD) is a tree disease caused by the exotic plant pathogen Phytophthora ramorum. Originally introduced with imported nursery plants, the pathogen has spread widely across coastal California and southwestern Oregon, where it has killed hundreds of thousands of native trees over the past two decades. Sudden oak death was first located on The Santa Lucia Preserve in 2005, and has since been found in a number of streamside forests and oak woodlands.

While mostly unaffected by SOD itself, the California bay laurel tree (Umbellularia californica) can serve as a carrier, harboring the pathogen on its leaves and twigs and spreading it to other tree species that are more susceptible to SOD-induced mortality, including tanoak, California coast live oak, black oak, Shreve’s oak, and canyon live oak. On The Preserve, the native tanoak (Notholithocarpus densiflorus) is the most susceptible.

The Santa Lucia Conservancy has participated in the statewide SOD Blitz since 2008 to help study the spread of Sudden Oak Death on The Preserve. On April 21st, Santa Lucia Conservancy staff and Preserve members will collect over 100 samples of California bay laurel leaves for early detection of SOD. Since the pathogen spreads most readily on bay laurels, lesions on the leaves of this species serve as an early indicator that SOD has spread to new areas, helping us better understand the status and progression of the pathogen in our forests.

The spread of SOD has slowed over the last few years due to drought, so identifying the bay laurels that are still infected by SOD after four consecutive dry seasons is a unique opportunity to help flatten the SOD epidemic curve and protect the forests we love.

When trees on The Preserve die from SOD, there is potential for forest species compositions to be altered and canopy cover to be reduced over time. The standing dead trees can also create ladder fuels, which are woody materials that can readily transfer fire from the forest floor to the canopy, potentially increasing a fire’s severity and spread.

Understanding the potential impacts of the pathogen and its relationship to wildfire is important to how we manage our forests. In 2014, UC Davis researchers found that redwood forests impacted most severely by SOD in the Big Sur region had higher rates of tree mortality when they subsequently burned.  Identifying SOD-infested areas of The Preserve is a critical first step in prioritizing the Conservancy’s forest management activities including fuels reduction and prescribed fire.