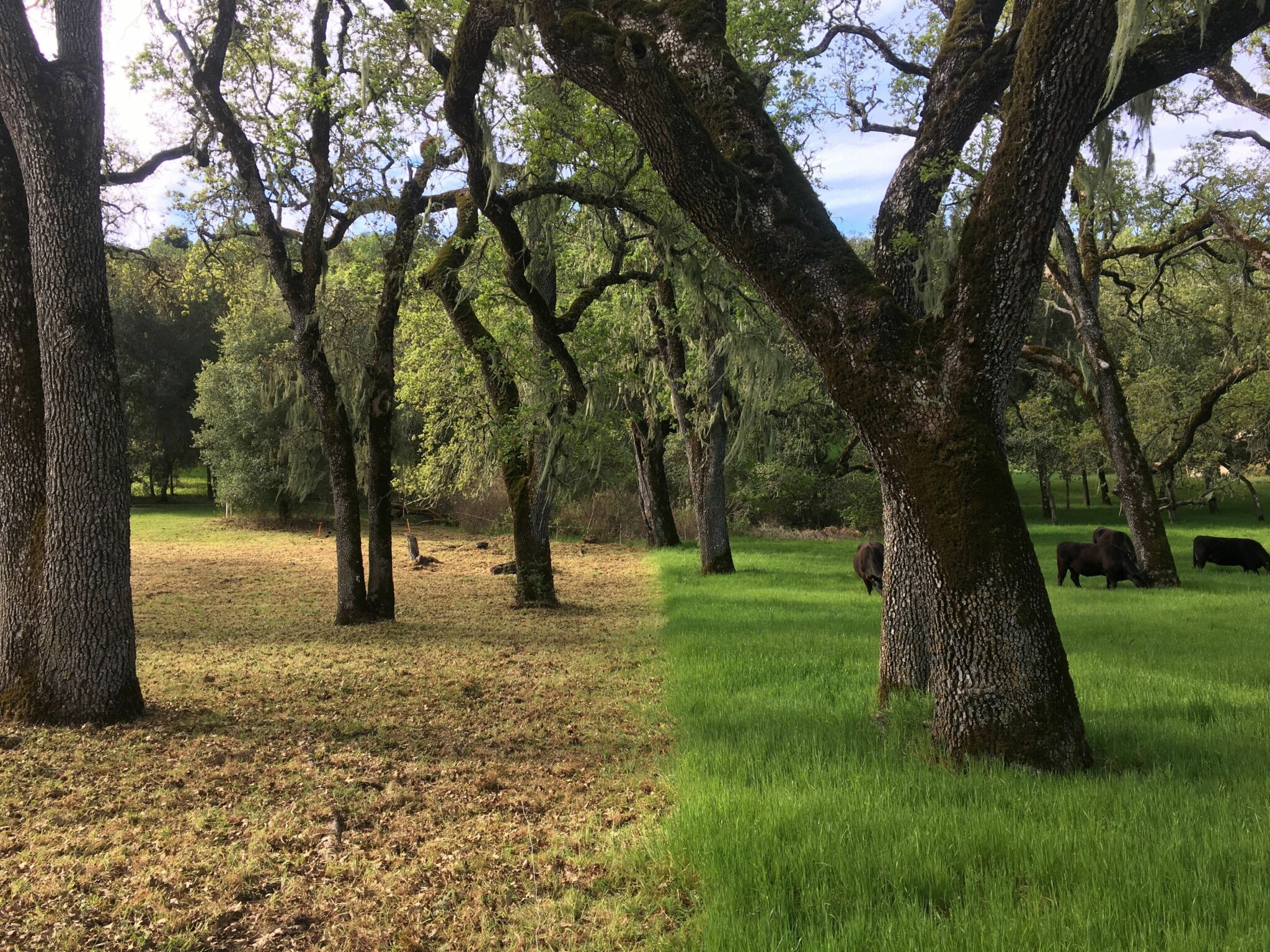 The contrast between a just-grazed pasture and the first day of grazing in a new, adjacent pasture on San Clemente. Photo by Andrew Evans.

In this ecological moment, animal husbandry is a controversial topic. Industrial livestock production has led to much of the ecological degradation our planet is suffering. We hear that commercial beef production clears rainforests into croplands and grasslands, grasslands are overgrazed into deserts, and global livestock production spews 14.5 percent of all anthropogenic greenhouse gas emissions into the atmosphere. These facts have led many people concerned about the environment to avoid animal products.

Yet the Santa Lucia Conservancy runs two herds of cattle to benefit 2,000 acres of our coastal prairie habitat. How can this be? Contrasting the impacts of industrial-scale livestock production, the Conservancy established its Conservation Grazing Program in 2013 and joined a growing movement of land managers using livestock to conserve and restore the local environment rather than degrade it.

How Proper Grazing Can Help Prairies

At first glance, the dynamics between herbivores and plants may seem pretty one-sided. Plants grow, animals eat them…poor plants. But ecology is so much more complex than that; grass depends on the herbivore just as much as the herbivore depends on grass.

The presence of herbivores on a landscape, in our case livestock, can benefit prairie plant communities when planned with biodiversity and scientific monitoring in mind. Grazing modifies the levels of soil cover. Cattle can lay down a straw-like layer of dead grass, known as thatch, in areas where water evaporates from overly-exposed soil and can remove it where excessive cover shades out the sunlight needed for new plants to germinate and grow. Herbivores also cycle fertility, converting the nutrients held in dead organic matter into compounds (digested and held within feces and urine) that feed soil microbes. This cycling aids future plant growth and long-term carbon storage in prairie soils.

Lastly, the hooves of our cattle physically press seeds down into the soil to help the next generation of plants establish, though this also causes short-term soil compaction. By feeding the soil for each new year’s plant growth, the positive impacts of sustainably managed grazing can bolster the prairie’s plant community, the animals who feed on and nest in those plants, and the predators who hunt in these habitats.

How Our Conservation Grazing Program Works

Grazing on the Preserve is not new. Rancho San Carlos was a working cattle ranch for over 150 years before it became The Santa Lucia Preserve in 1995. When The Preserve was founded, the Conservancy removed the cattle that had overgrazed the landscape, and initially the prairie thrived. However, after this initial rebound, the productivity of native grasses and wildflowers began to decline.

As the established invasive grasses (e.g. wild oat and ripgut brome) and other plants grew and died each year, their dead plant matter built up layers of thatch thick enough to shade out potential new growth. As the Conservancy witnessed increases in thatch cover and considered the impacts it could have on native flora and fauna, we began to think – both creatively and in the Preserve’s historical context – about how the grasslands conditions could be improved and maintained long-term.

Land managers use goats, sheep, or cattle to manage rangelands from open grasslands and prairies to thick oak woodlands, depending on the forage preference of each species. While goats remove both twiggy and herbaceous vegetation, cows remove mostly herbaceous vegetation, and sheep fall between. As our Grasslands Initiative focuses on managing sensitive prairies, we have found that cattle perform our desired disturbance, are managed easily with a single-wire fence (unlike loose-roaming elk), and require little oversight compared to sheep or goats that need full-time oversight by guard dogs and shepherds.

Before the Conservancy returned cattle to The Preserve, we established 10 (later expanded to 27) experimental test plots within potential grazing pastures across five different regions of the Preserve. We fence around these “exclosures” to exclude the cows from grazing the plot. This allows us to compare the plant composition between adjacent grazed and ungrazed pastures each spring.

Now 10 years in, our overall approach in our Conservation Grazing Program is to 1) deeply understand the ecological principles behind prairie function, ecological interactions, and biological cycles, but also how cattle selectively eat forage and disturb the landscape, 2) apply that understanding when building pasture boundaries and planning herd movements, 3) observe the cattle’s impact while they’re in the pasture and in the following months, including rigorous data collection, and 4) adjust our practice as we proceed to new pastures and eventually loop back to previous ones. This practice is essential to adaptive land management. Since we brought cattle back to The Preserve in 2013, we’ve used and adjusted this formula to guide our efforts.

We implement the expertise of both in-house conservation ecologists and research partners, including the USDA Agricultural Research Service (ARS) and the Ventana Wildlife Society, to help us monitor the impact of our livestock.

Grazing Only Where it Will Have a Positive Impact

Conservation Grazing Manager Claudio Núñez greets the cows in a large pasture on The Flats. Photo by Alix Soliman.

An important part of our strategy is prescription: we only introduce grazing in grasslands and oak savannas that are likely to benefit from it, and prevent or remove grazing where we would see adverse outcomes.

One of our exclosures, M7, is very different from our other 26 exclosures. It shows remarkable plant biodiversity and native plant cover and doesn’t suffer from the suffocating levels of thatch that other pastures experienced when grazing was removed. Early program managers recognized this and chose to leave this site ungrazed to maintain its native plant assemblage and avoid any potential changes that even low-intensity grazing might make. In the next two years, we plan to publish a scientific paper describing M7 and its potential use as a model for coastal prairie restoration.

The Flats at the heart of The Preserve is an opposing example. The Flats are dominated by invasive perennial, Harding grass (Phalaris aquatica), which was originally certified by the California Crop Improvement Association in 1946 for seeding rangelands to improve forage quality. However, what made it a good meal for livestock now makes it extremely difficult for conservation efforts: it regrows even after severe damage and grazing, it regrows after fire, and it forms thick patches that choke out most other plants.

From our in-person observations and early data trends, we could see that our typical lower-intensity grazing did not reduce the Harding grass enough to enrich biodiversity, so we needed a new strategy. Director of Ecological Management Dr. Rodrigo Sierra Corona and Conservation Grazing Program Manager Claudio Núñez chose to increase our grazing intensity in the Flats area by dividing the fields into smaller sections and letting the cows graze for longer, encouraging them to eat the Harding grass down to the ground. We will measure whether Harding grass will give way enough to allow native plants to sprout in this pasture.

While our Conservation Grazing Program must operate within a budget, its success is not beholden to its financial returns like a commercial grazing operation. Instead, we measure our success by the health of the ecosystem. The Conservancy has the unique capacity and flexibility to experiment with our management practices and conduct research, making us regenerative grazing leaders in California.

Livestock grazing is a viable tool for land managers, just like prescribed fire, a weed wrench, or a tractor. A growing chorus of progressive livestock professionals have begun to think this way, declaring, “it’s not the cow, it’s the how.” Our research is beginning  to corroborate this hypothesis, but we need the collaboration of both conservationists and livestock producers to make the dream of expanding conservation-minded ranching a reality beyond the gates of The Preserve.