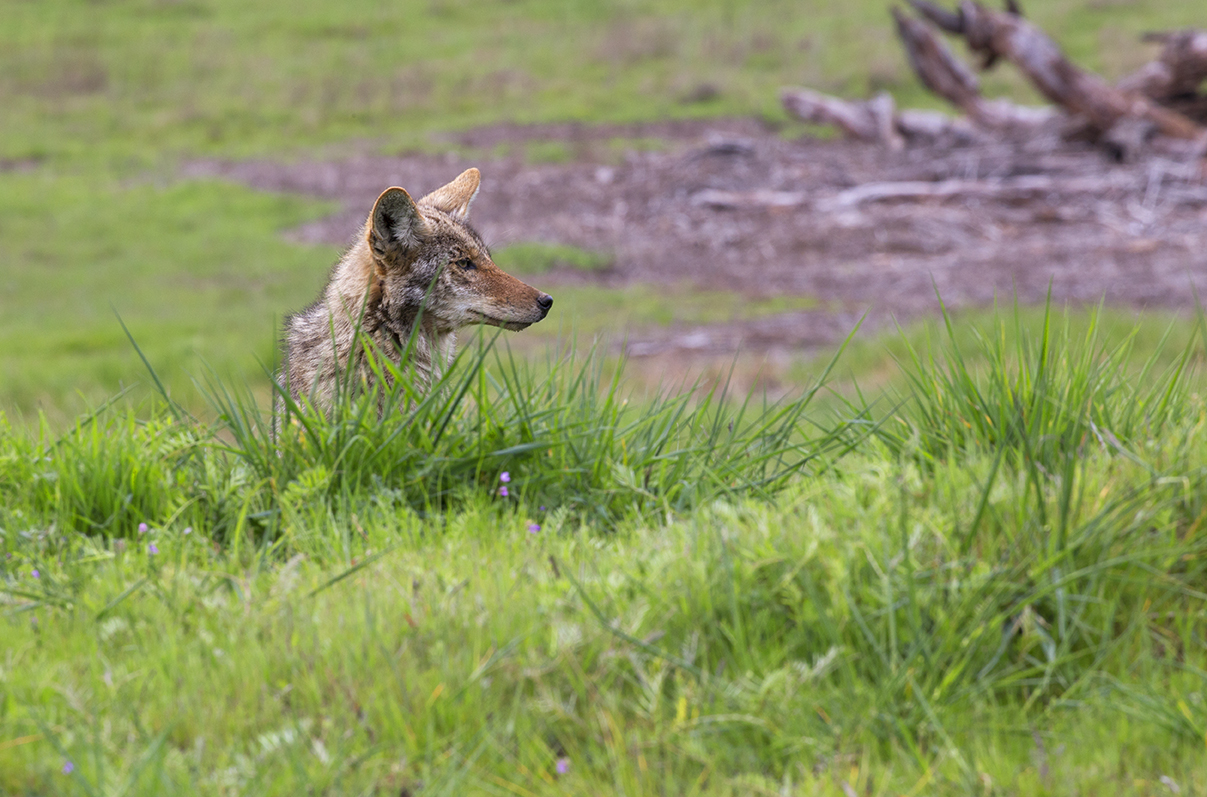 A coyote peeks out above the tall grass. Photo by Rodrigo Sierra Corona.

Coyotes are currently at the peak of their denning season, lasting from May through the end of summer. Right now they are more visible, vocal, and territorial than any other time of year, as breeding pairs are busy defending areas anywhere from 4 to 15 square miles surrounding their dens in tree hollows, holes, or rocky outcrops. The gestation period for coyotes is about 60 days, with litter sizes averaging five to six pups.

Pups are weaned at about a month old. At this time, pups begin to explore the world around them and both parents work hard to constantly feed them regurgitated food as they grow rapidly. While male pups typically leave their mother between six and nine months old (when they are nearly full-sized), female pups often stay with their mother’s pack.

Colloquially known as “American song dogs,” coyotes are often heard howling, yipping, and barking as they communicate with those in their pack and warn others to stay out of their territory. In fact, their scientific name, Canis latrans, is Latin for “barking dog.”

A coyote pack is led by a monogamous breeding pair, the alpha male and female, and other members can include pups from a prior year, adults that have left other packs and been accepted, and puppies from the current year. Wild coyotes subsist on mice, rabbits, gophers, wood rats, ground squirrels, snakes, birds, and other small animals and tend to have between three and seven adults per pack, though lone or “transient” coyotes are common as well.

While considered a habitat generalist, the coyote is most often found in open spaces like grasslands, oak savannas, and woodland edges. Wild coyotes are diurnal, meaning they are most active at dawn and dusk. However, coyotes living in areas of high human density will shift their schedules to be more nocturnal. In the wild, coyotes can live up to 10 years old.

Living in Harmony with Coyotes

If you’re hiking in Carmel Valley, it is especially important to leash your pets during coyote denning season. To protect their pups, coyotes may “escort” you and your pets away from the vicinity of their den. This behavior is well documented and should not be taken as a threat. Once you’ve left their territory, the coyote will typically turn and trot away.

The likelihood of a coyote attacking a human is extremely low. According to The Humane Society, “more people are killed by errant golf balls and flying champagne corks each year than are bitten by coyotes.”

If you do feel threatened by coyotes, please remember to:

Santa Lucia Preserve members and residents: If you encounter an especially brazen coyote, please contact our Conservation Ecologist Dr. Brian Woodward at bwoodward@slconservancy.org with the specific location and information about the coyote’s behavior so we can share information about probable den sites on The Preserve to avoid.