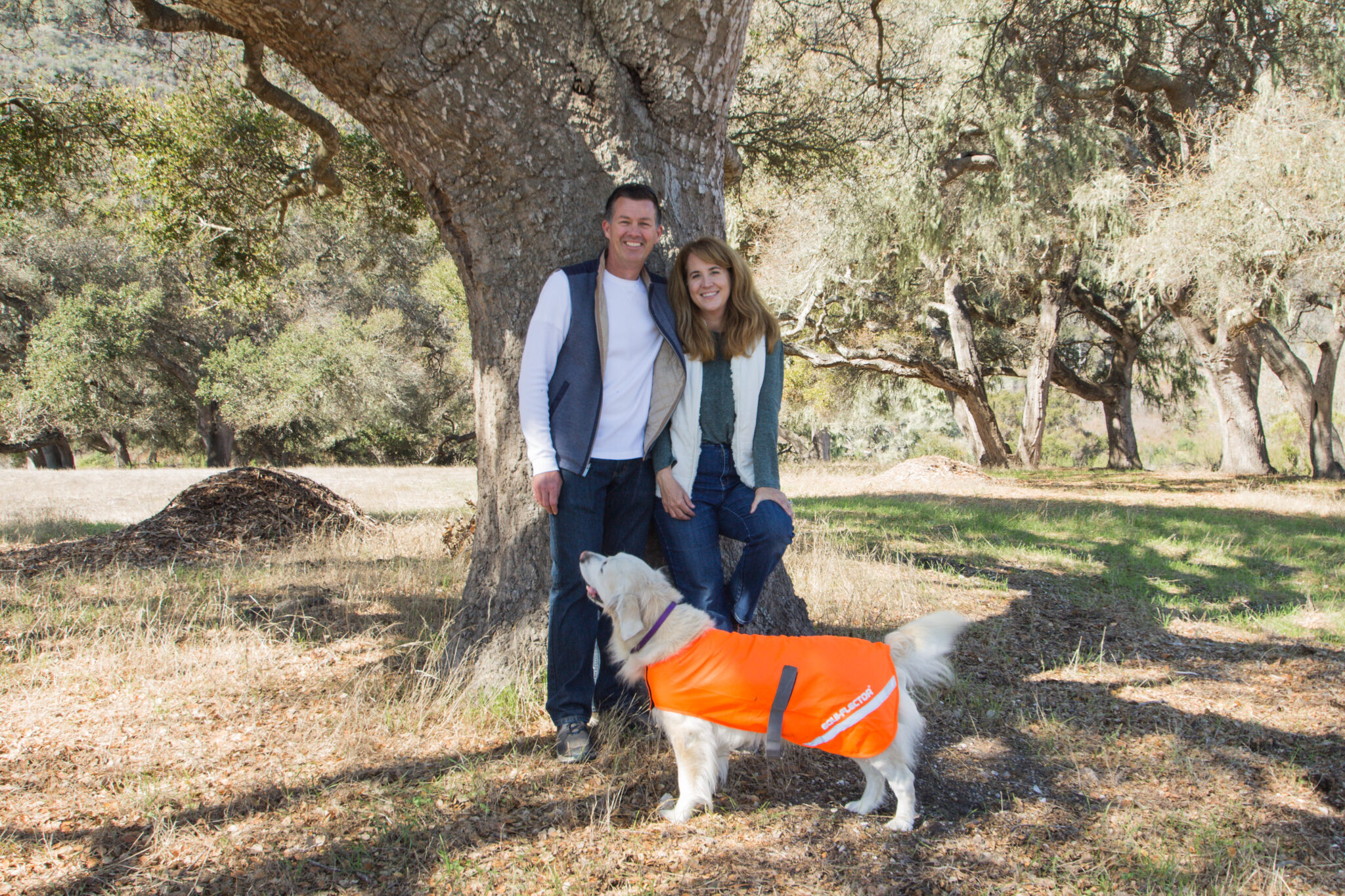 Matt Himmelman, Rachel Finlay, and their dog Reese under their favorite oak on The Preserve. Photo by Alix Soliman.

It is difficult to comprehend the change this land has known over its lifetime – mountains have risen and eroded; the sea has lapped up and receded; patterns of flooding, drought, and wildfire have altered the habitats of the Santa Lucia Range time and time again. What, then, is the ultimate goal of restoration?

On the Santa Lucia Preserve, the Conservancy aims to restore the ecosystem to a stable and resilient state – to the conditions that existed before commercial ranching transformed fields of wildflowers into weeds and fire suppression increased fuel build-up and disrupted natural cycles. We are working towards an equilibrium of low-impact human habitation and healthy, interconnected ecosystems teeming with biodiversity.

Restoration is slow work, set on a clock ticking at a pace that lags even behind rural life in Carmel Valley. It is not only a labor of love but of patience, requiring perseverance and resolve of those who earnestly undertake it. With differing challenges on each parcel of land, the Conservancy provides tailored Openlands Management Plans (OMPs) to Preserve landowners with recommended tools, methods, and an implementation timeline.

I met with a few Preserve members to see how their OMP efforts are coming along. Rachel Finlay and Matt Himmelman are tackling brush encroachment and thick stands of invasive French broom while the Cardones are managing invasive thistles and bare earth at Stone Barns.

Matt Himmelman and Rachel Finlay began their Openlands Management Plan two years ago, and while they live in Orange County awaiting the construction of their Preserve home, the couple is adamant about returning their lot to the open savanna it once was. For them, the protection of trees, appreciation for the inherent value of natural land, and space to breathe in a bucolic setting were the main drivers for purchasing within The Santa Lucia Preserve.

“I quickly grew frustrated with the constant battles, not just in my own community, but in every community around us, over tearing down trees because someone wanted a different view out of their window,” Rachel said. Serving as the head of a landscape committee in Orange County for 10 years, she took an active role in defending trees from the chainsaw. “But there was only so much I could do from a restoration standpoint,” she said. “The project of this place is what’s fun.”

When they first visited the site of their new home in July of 2020, “it was completely overgrown,” Matt said. “You couldn’t see much of the land from the street because the weeds were seven feet tall.” The first thing Matt and Rachel did was mow their Homeland to clear out the brush and get a better idea of their lot’s terrain. Then, they raised the understory of the old coast live oaks within the building envelope, which had branches growing all the way to the ground. Still, outside of the Homeland boundary, their Openlands were thick with invasive weeds, thatch, and poison oak that towered above them like trees.

After the Conservancy brought 800 goats onto their Openlands for three days, the three of us strolled together through their sprawling property to gauge the immediate impacts to the land. While the goats left woody poison oak plants alone or trampled paths through the thickets, they munched down the seed heads of French broom and defoliated the lowest branches of the oak trees to open up the understory.

“Goats are an invaluable tool,” Rachel said. “I knew goats would probably be our best advance forward, allowing us to make some headway.” While hiring someone to mechanically masticate is one option for dealing with heavy brush encroachment, it can’t provide the nutrient cycling benefits that an herbivore’s digestive system can, and may be more costly and time-consuming in the long-run.

I had the pleasure to see their first reactions to the goat-induced transformation of their property. “This was all French broom,” Matt says, pointing to an open area where the goat fencing had been placed. “We had been working to clear a pathway, but it was completely surrounded by weeds before.”

A goat reaches up to eat the lowest leaves on a coast live oak. Photo by Alix Soliman.

Along the southwest section of their lot, Rancho San Carlos Trail runs beside a pond. “This is our first time seeing to the other side of the trail,” Rachel remarked as we approached the pond from the northeast. “There was just no way to get in here before,” Matt says, opening his arms wide with dead coyote brush sticks crunching beneath his shoes.

Matt and Rachel’s ultimate goal is to return their property to a beautiful savanna, lush with the native wildflowers and bunchgrasses that once flourished here. Of course, that’s easier said than done. “The plans are great on paper, but it takes a lot more time than you think,” Rachel said. “It didn’t get like this overnight, and we’re not going to get it back to the way it was overnight,” Matt added.

As the coming rains dissolve nutrient-rich goat pellets into the soil to fuel new growth, we look forward to checking back in on Matt and Rachel’s restoration project.

Anne Cardone, an artist and former sports broadcaster from New York, found The Preserve on a visit to Carmel with her husband Denis and son Lex almost 20 years ago. After building a home inspired by a sketch of a pastoral barn in Napa Valley and settling into their new life on The Preserve, Conservancy staff pointed out that invasive thistles were taking over the Cardone residence. Known as Stone Barns, the property is made up primarily of mixed grassland and oak woodland habitats.

“Moving from New York, I didn’t know the thistles were invasive because I was a city girl,” Anne said. “I let them go a couple of years until somebody said ‘oh, no, this is not good.’ Then I got aggressive.”

Immediately upon learning that her land was becoming choked with invasive plants in 2015, Anne worked with the Conservancy to write an Openlands Management Plan (OMP), which provides management methods and a schedule for getting a handle on noxious weeds and returning the land to its natural state.

She hired Rob Thompson, a resource ecologist who knows the land intimately, to conduct the prescriptions in the OMP including spot-mowing milk Thistle, bull thistle, and Italian thistle and seeding native wildflowers. The Conservancy then brought conservation grazing cattle onto her land in 2019 to cycle nutrients back into soil and help native wildflowers and bunchgrasses better compete against the invasive species.

Anne adores the cows in particular, with their unique personalities and the quick work they make of her dense grasslands. Fenced right up to the house when the cows stay at her place, Anne has had some up close and personal interactions with them.

“It was light at 6:00 a.m. one summer morning and there was a mother right outside the open bedroom window, nursing her baby. The mother was bellowing like crazy and woke us up,” Anne laughs, remembering how deep and displeased the mother sounded. “My husband says, ‘can’t you move that out?’ and I say, ‘what am I supposed to do? You want me to go out there and push a cow?!’” No such interference occurred, and the mother continued nursing her calf and bellowing her heart out while Anne and Denis looked on in awe.

Conservancy cattle grazing a pasture on The Preserve. Photo by Alix Soliman

Since starting to manage Stone Barns for ecological conservation values, Anne has seen massive improvements. “The thistles are minimal now and we have great wildflowers in the spring,” she said. Seven years into her restoration project, the management time required to maintain the Cardone property as a refuge for native plants and wildlife has started to decrease. Though new challenges may be on the horizon (the noxious seeds of French broom have not yet traveled to their portion of The Preserve), Anne and Denis now know what to look for and have the tools to tackle whatever comes their way.

If you are a Preserve landowner interested in taking a more active role in restoring your property, please contact Restoration Manager Jackson Brooke at jbrooke@slconservancy.org to begin your Openlands Management Plan.