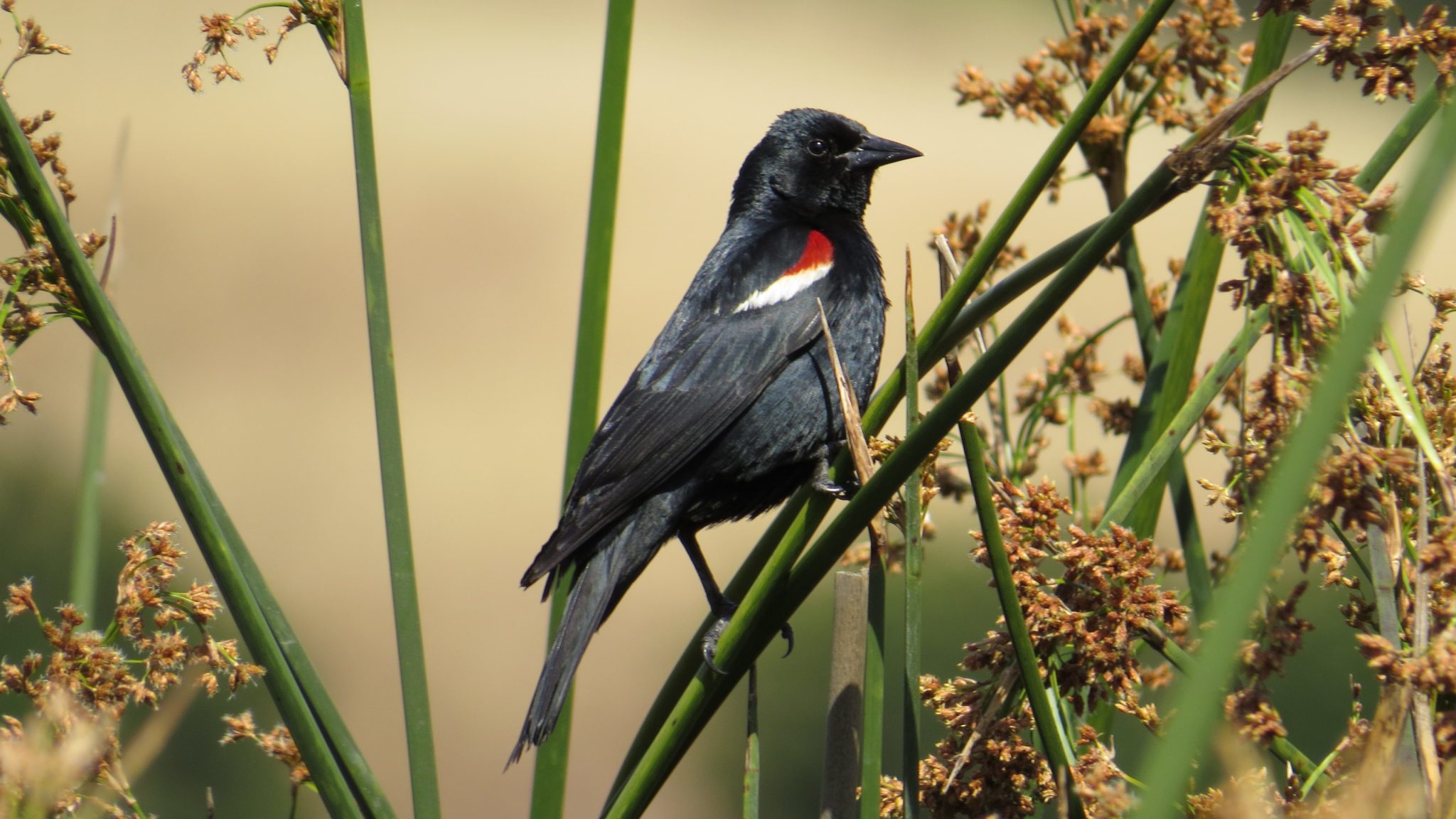 They “darken the sky for some distance with their masses” wrote an observer in 1853 about tricolored blackbirds (Agelaius tricolor). Unfortunately, this is no longer true. The tricolored blackbird has been listed as threatened under the California Endangered Species Act (CESA) since 2019 and their population has declined 34% in California since 2010 and an estimated 85% since the early 1900’s.

In the race to save this species from extinction, Santa Lucia Conservancy has collaborated with UC Davis on a mark-recapture study using individually numbered leg bands, with UCLA on a genetics study to evaluate the population statewide, and most recently with the Cornell Lab of Ornithology to study and predict population trends resulting in Deputy Director Christy Wyckoff’s recent co-authored peer paper published in Ecosphere.

Found almost exclusively in California, tricolored blackbirds gather at Ohlone Pond on the Santa Lucia Preserve and other wetland marshes across the state between early April and mid-June to mate and rear their young. Tricolored blackbirds are the only remaining North American land bird to form large colonies that travel, forage, and nest together.

The males are covered in iridescent black feathers with deep red epaulets (colored wing patches) with prominent white bands underneath. The females are a mixture of brown and white with some ruddy coloring on their wing shoulders. When the breeding season begins, the males will spread their wings out, ruffle their neck feathers, and sing their awkward song to attract the female bird. When the male has successfully found his mate, the pair will communicate their ownership of territory by pointing their bills upwards, feathers sleeked back, with the red patches facing outward.

A the start of the breeding season the female builds the nest while the male stakes out his small territory surrounded by a mass of tricolors on adjacent tule reeds. First, the female collects leaves from the cattails or tules in the wetlands and grasses from nearby fields. Making sure she is at least eight inches above the ground or water, she soaks the gathered plants before binding them together to create a seven by five inch nest. Finally, she adds soft plant fibers and a bit of mud to ready the bed for her hatchlings.

She will rear between 3-4 eggs in each brood and produce up to three broods in one breeding season. Measuring reproductive success for this species is extremely difficult and varies widely both within and between colonies, but it is estimated to be quite low. A six year study published in 2013 found that only five of the 47 colonies monitored produced an average of one or more fledglings per nest.

Research on The Santa Lucia Preserve

We have been monitoring tricolored blackbird colonies on The Preserve for the past 10 years. The birds nest at Ohlone Pond each year, have also nested at Moore’s Lake, Cienega Pond and Pond 20 in the Vasquez neighborhood for a few seasons. We recently placed Audiomoths at the colonies, which are devices that record sound every ten minutes. In partnership with Point Blue Conservation Science, the audio files are studied for the patterns and sounds of females making nests, males singing to attract a mate, and chicks peeping, which gives us a look into the undisturbed life of the colonies to see what stage of the breeding season they are at.

However, capturing sound doesn’t give us enough information to fully understand the life of the tricolored blackbird. Because they are a nomadic species that may breed two to three times in one year, each time in a different location, it is important to track their movement to predict long-term population trends and identify conservation solutions.

For the past nine years, Santa Lucia Conservancy has banded tricolors at Ohlone Pond, Laguna Seca, and Fort Ord. We set traps using cracked corn and dried mealworms as bait to lure the birds inside so we can place unique ID bands on each bird’s ankle. With the unique ID we can recognize their life history each year when we recapture them at our study sites. This year we recaptured several birds we first banded in 2013, which is both incredibly promising for the colony and a bit like seeing an old friend.

Banding the tricolors lets us take a closer look at the appearance and health of each bird. We track their gender, age, size, condition of their feet, wing color, and brood patch (a featherless patch of skin on the female’s belly that helps transfer heat to the eggs during the incubation period). The birds are held for no more than 15-20 minutes and the information we gather from temporary trapping is critical in helping us understand their habitat needs and population patterns.

This relationship between the two populations is likely driven by the sustained drought affecting the south more severely and the increase of water-intensive nut crops causing a significant loss of wetlands and grasslands that tricolored blackbirds depend on.

As their range is predicted to be constrained northward in the long-term, the survival of the species will rest on the protection and restoration of the grasslands that provide foraging habitat and the wetlands that provide nesting habitat for the tricolored blackbird. The Preserve provides access to both, and we will continue to collaborate with researchers for the study and protection of the tricolored blackbird long into the future.