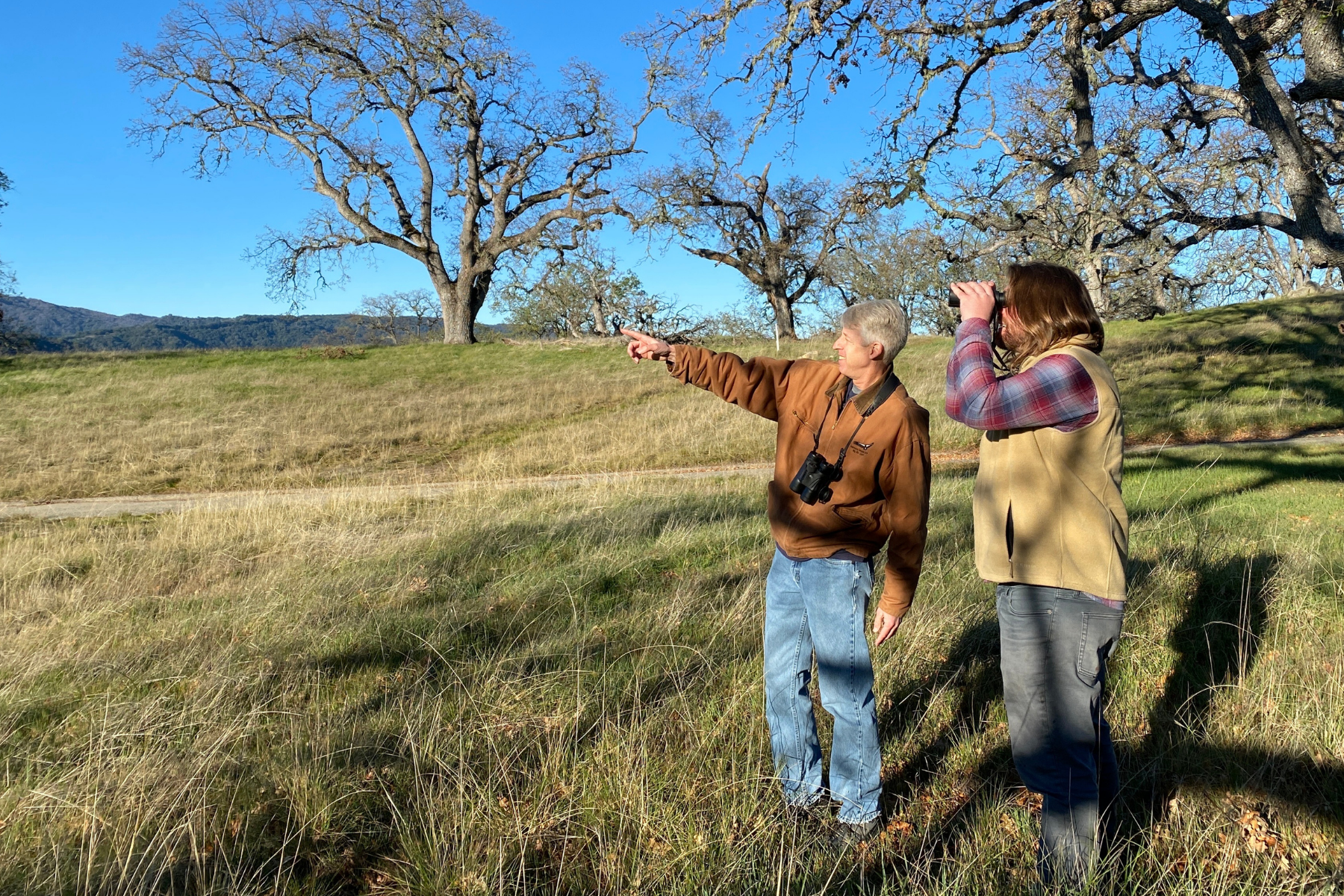 Soaring overhead on rising thermals, dive-bombing rodents in the rolling grasslands with their piercing screeches echoing off of the hills – birds of prey are a striking sight in the Santa Lucia Mountains. Raptors, or predatory birds, have characteristically hooked beaks, sharp talons, and powerful eyesight that give them the ability to zero in on their prey. In fact, the word raptor stems from the Latin rapere, which means to seize or plunder. It’s raptor breeding season right now, which makes it an especially good time to venture out and observe these birds as they mate and nest.

Each year, the Conservancy partners with Mike Stake, Senior Wildlife Biologist at Ventana Wildlife Society, to conduct surveys on The Santa Lucia Preserve in an effort to monitor raptor populations. Understanding how populations of sky-faring predators change over time gives us a better idea of what’s happening with their prey species on the ground. As key indicator species, “understanding raptor populations also indirectly helps us understand rodent populations,” Conservation Ecologist Dr. Brian Woodward says. Giving us one piece of the larger ecological picture, this data helps the Conservancy evaluate whether our efforts to protect habitat and promote conservation-compatible residences are working, particularly in our grasslands and oak savannas.

For instance, if enough Preserve residents were to use rodenticides rather than the recommended Integrated Pest Management (IPM), we could see a cascading negative impact on raptor populations, among other predators. That said, we must also grasp that raptors on The Preserve don’t exist in a vacuum; populations here often reflect what scientists are seeing at a regional level and may also be tied to climatic factors.

The survey method is relatively simple. We visit the same 34 locations (known as “raptor points”) in February, April, and June, making sure to get all of the points done within the same 4 hour window over a period of two days in order to decrease the potential for variation in the data. As with all scientific methods, “the goal is standardization,” Mike says with his eyes on the horizon. “If we can keep everything the same every year, we can get a better idea of how the population has changed over time.”

At each raptor point, we set a timer for 5 minutes and scan the surrounding landscape 360 degrees with our binoculars, especially the tops of trees and other high perch locations, recording the species and number of each raptor we see or hear. Situated within a major north-south bird migration path known as the Pacific Flyway, 28 species of raptors have been documented on the Santa Lucia Preserve over the years. Of those species, here is a selection of 7 common species that you can learn to identify:

In Carmel Valley, Turkey Vulture sightings are just about as common as sports car sightings. Soaring in wobbly spirals on rising thermals, they use their extraordinary sense of smell to scavenge for carrion together and are able to catch a whiff of a meal from over a mile away. Groups of Turkey Vultures are known as a kettle in flight, a committee at rest, and a wake when feeding. They are easily identified by their namesake, with a bald red head and dark feathers, as well as the long, finger-like feathers at the tips of their wings, and a long tail. In flight, Turkey Vultures hold their 6-foot wingspan in a distinguishable ‘V’ shape when seen head-on. Unlike other raptors, Turkey Vultures cannot kill their prey and their feet do not have strong talons. With powerful beaks, they thrust their bald heads into the bodies of decaying animals to feed. Without the vocal organs to make what we typically think of as a bird call, Turkey Vultures sometimes make a guttural, dinosaur-like hiss when irritated.

A Red-tailed Hawk takes off. Photo by Serena Lasko.

The Red-tailed Hawk is the most common hawk species across North America, and the most common raptor seen on the Santa Lucia Preserve after the Turkey Vulture. They are large with a 4-foot wingspan and a butero shape, meaning broad, rounded wings and a short tail. Because they share this shape with other raptor species, the easiest way to distinguish them is by their shrill, raspy “keeeeeer” call that is commonly used in Hollywood movies as a stand-in for any raptor species. They often have a reddish tail (as their name suggests) and pale bellies, but don’t be fooled, the Red-Tailed Hawk comes in many different color variations. In the words of Mike Stake, “when in doubt, it’s a Red-tailed Hawk.” To hunt, they either perch motionless in trees along roadsides and near wide open spaces, or hang in the air scanning for prey below. Breeding season begins in the spring and the courtship flight is a sight to behold. The pair soars in wide circles at a great height, then the male dives down and shoots back up several times, approaching the female from above to touch her briefly with his legs. Sometimes the female will latch onto the male’s extended legs and they will plummet towards the ground in spirals.

The single best way to find a Red-shouldered Hawk is to listen for this noisy hawk’s distinct “kee-aah, kee-aah, kee-aah, kee-aah,” as they are often heard before they are seen. The Red-shouldered Hawk is medium sized, with peach or reddish-brown chests, broad and and square-ish 3.3 foot wingspan, and a fairly long, characteristically striped tail. On the Preserve, look out for them perching in the redwoods or oaks near a stream or pond, as this raptor prefers wet, forested habitat. Because Red-Shouldered hawks return to the same nesting territory each year and nestlings can shoot their feces over the edge of the nest at five days old, a collection of bird poop on the forest floor is a good sign of an active nest. The oldest known bird of this species was a 25 year old female that was banded in California in 1974 and was recaptured in 2000.

As the smallest falcon species and most brightly colored raptor, the American Kestrel is easy to spot once you know what to look for. They have a wingspan of up to 2 feet and are about the size of a Mourning Dove. Males have an orange and black banded shoulders above slate-blue wings and a rusty colored belly. Females are rusty overall, with black barring on the wings and back. Both males and females have a long tail, a grey crown on a large head, and four black slashes down their face, one under each eye and one just behind each eye, separated by a pale stripe. Sometimes mistaken for another native falcon, the Merlin (Falco columbarius), the American Kestrel can be discerned by its distinct facial pattern. Their most common call is a rapid and distinctive klee-klee-klee-klee. The American Kestrel often bobs its tail when perched and flaps its wings consistently in flight, giving it a fidgety appearance. You’ll find this little falcon in grasslands, ranch lands, suburbs, towns, and deserts. Unable to construct their own nests or create their own cavities, they compete for ready-made cavities such as rock crevices, tree hollows, woodpecker holes, and nooks in buildings. While they hunt insects, small rodents, birds, reptiles, and amphibians, they may also become dinner for larger raptors like the Cooper’s Hawk.

A Golden Eagle in flight. Photo courtesy of Bryan Calk.

In years past, Conservancy staff have seen Golden Eagles nesting on Penon Peak. One of the largest raptors in North America, they share the butero shape of Red-tailed Hawks, with broad, rounded wings and a short tail, though Golden Eagle wings are longer and measure up to 7 feet. All dark brown with a golden nape and sometimes with cream patches on their tail, they can be distinguished from the Red-tailed Hawk by their sheer size and comparative silence. Their calls are infrequent and usually heard only during breeding season, when the hungry cries of the nestlings can be heard over a mile away. They hunt alone or in pairs, with their wings lifted in a slight “V” shape. Though they hunt from above and can reach diving speeds close to 200 miles per hour, they typically kill their prey on the ground. They primarily hunt small to medium sized mammals and their favorite meal is the black-tailed jack rabbit. This raptor favors open space around the tops of hills and cliffs, where they nest on steep escarpments. Their nests are massive, averaging 5-6 feet wide and 2 feet high, and are constructed of sticks, vegetation, bones, wire, and other objects. Their courtship flight is known as “sky-dancing,” as the male does a series of 20 steep dives and upward swoops, beating its wings a few times at the top of the swoop to impress the female.

The Peregrine falcon is a conservation success story. Federally listed as an endangered species in the 1970s, the use of DDT (the first of the modern insecticides) caused their egg shells to be so thin that they would break under the weight of their parents. Now, after the banning of DDT, they are widespread across North America again. They have a wingspan of about three feet with pointed wing tips. Their bodies and underwings are strongly checkered white and black. The top-side of their wings is dark grey, matching their distinctive ‘side-burns’ that come down from the eye into a white patch at the top of their chest. The Peregrine Falcon is well-adapted to cities, where it mainly hunts pigeons. Elsewhere, it feeds primarily on ducks, shorebirds, bats, and songbirds. This raptor is often found perching and nesting on cliffs, skyscrapers, water towers, cliffs, tree snags, and other tall structures. When dropping down on prey with their wings tucked in, known as stooping, they can achieve speeds of over 230 miles per hour and have a film that comes over their eyes like goggles so they can see at this incredible speed.

A White-tailed Kite hovers on the wind in search of prey. Photo by Serena Lasko.

The White-tailed kite is a small, distinctive-looking hawk with a 3.5 foot wingspan. It has narrow, pointed wings and a long white tail that makes a fan shape in flight. The chest is pure white and the underside of the wing is white with dark grey ends. On the top-side, the wings are pale grey with black shoulders. Their head is white, with a dark spot around a red eye. They hover on the wind, or “kite” to search for prey, diving directly down when they find a small mammal. Found in grasslands, savannas, and marshes, they nest on treetops in mostly open areas or the edge of a forest. To mate, the male offers prey to the female mid-air and she meets him to complete the exchange by grabbing it upside-down. Unfortunately, White-tailed Kite populations have declined in the last 50 years across California, a pattern that matches declines seen over the last 10 years on The Preserve. Once one of the more common species we counted in our raptor surveys, “now we can go a whole season without getting one on the count and we’re not sure why,” Mike Stake says. He does have some ideas, however, as he outlined in a 2019 report on the species. Urban development converting habitat statewide, combined with periods of drought could be hurting populations.

In this post, we cover diurnal raptors of the orders Falconiformes (falcons) and Accipitriformes (hawks, eagles, kites, and vultures). However, the raptor category also includes nocturnal birds of the order Strigiformes (owls). Click here to learn about our nine resident owl species.

Now that you know what to look for, all you need is a pair of binoculars to go out and identify raptors on your own!